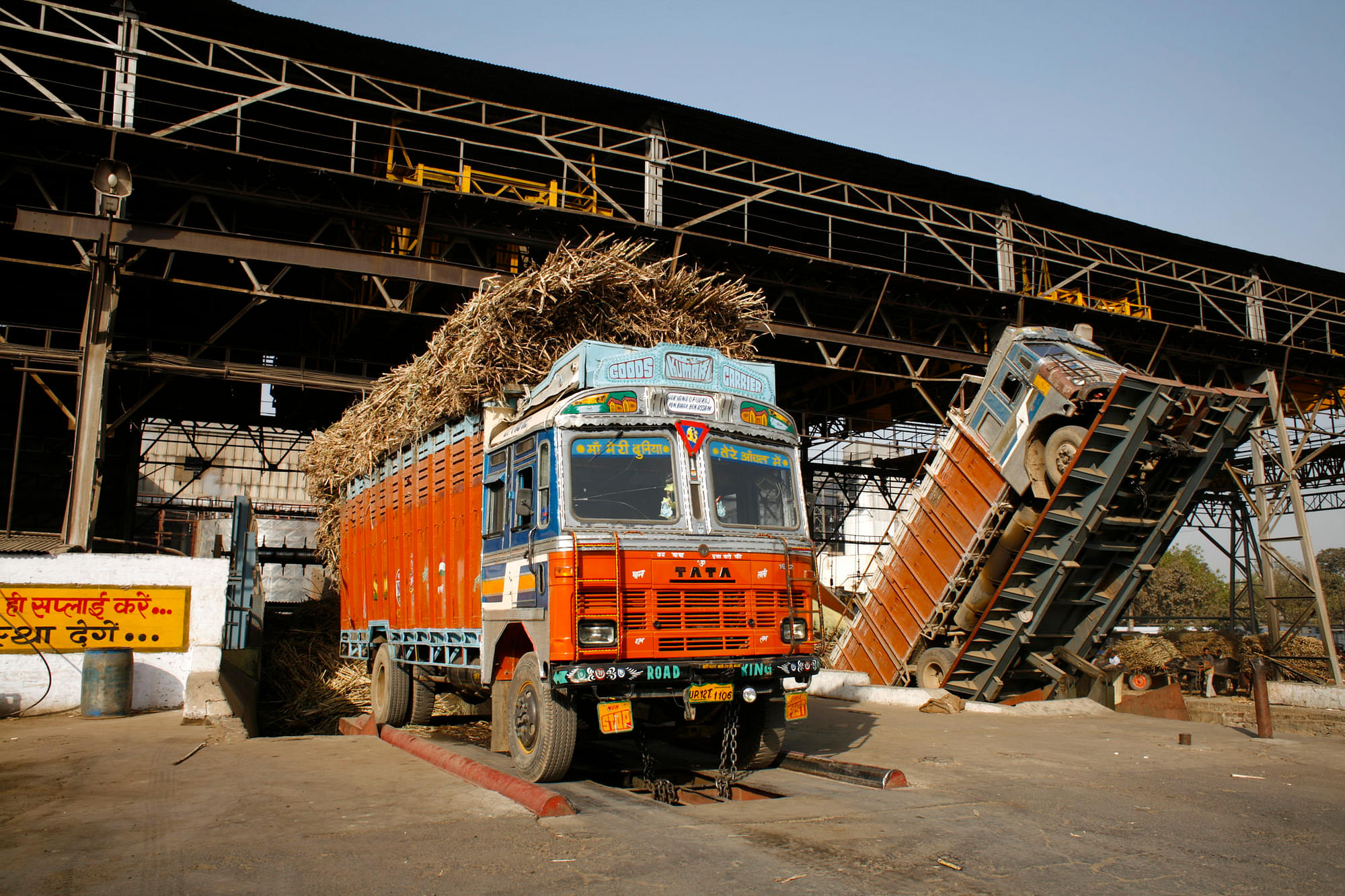 The Union Cabinet on Wednesday (30 December) approved a modified scheme to enhance ethanol distillation capacity in the country for producing first generation ethanol from feedstocks such as rice, wheat, barley, corn, sorghum, sugarcane and sugar beet.

Union Oil Minister for Petroleum and Natural Gas Dharmendra Pradhan said this is part of the government’s move to meet the demand of 1,000 crore litres of ethanol by 2030.

Currently, India has a capacity to produce 684 core litres of ethanol.

A feature of the decision is that the interest subvention is being extended for expansion of projects, including for molasses-based ones.

A Press Information Bureau (PIB) statement said that benefits of interest subvention scheme, however, would be extended to only those stand-alone distilleries which are using dry milling process with regard to grain-based ones.

Projects to produce ethanol and for installing any method approved by the Central Pollution Control Board for achieving zero liquid discharge would qualify for the scheme.

Also, making the cut will be efforts to install molecular sieve dehydration (MSDH) column to convert rectified spirit to ethanol in the existing distilleries.

Pradhan told the media that the Government will spend Rs 4,573 crore for the interest subvention scheme.

He said the government would bear interest subvention for five years including one year moratorium against the loan availed by the distillery units from banks at six per cent per annum or 50 per cent of the rate of interest charged by banks whichever is lower.

The scheme will be extended to only those distilleries that will supply at least 75 per cent of the ethanol produced from the added distillation capacity to oil marketing companies (OMCs) for blending with petrol.

Farmers will be the primary beneficiaries of this scheme since the Government’s decision to encourage ethanol production will now ensure that sugarcane finds alternate uses other than just producing sugar.

This is crucial given the fact that India has been producing sugar in excess of domestic demand leading to huge carryover stocks. The Indian Sugar Mills Association has estimated this year’s production at 31 million tonnes against 27.42 million tonnes last year.

ISMA has estimated that at least two million tonnes of sugar production would go into making molasses this season since the government has raised the price of ethanol supplied to oil-marketing companies.

For the current ethanol marketing year (December 2020-November 2021), the Centre has increased the price of ethanol extracted from the sugarcane juice to Rs 62.65 per litre from Rs 59.48 for the supply year that began on December 1.

Despite ethanol production increasing, the sugar industry has been carrying over huge stocks with it year after year.

This season (October 2020-September 21), the industry has carried over 10.64 million tonnes of sugar stocks from the last season despite a record 5.7 million tonnes exports of the commodity.

This year, Indian exporters hope to ship out at least five million tonnes of sugar, but the carryover stocks are likely to be higher than last year.

The PIB statement said that since 2010-11, India has been having surplus sugar production barring 2016-17 when the sugarcane crop was affected by drought.

“In the normal sugar season, about 32 million tonnes of sugar is produced, whereas our domestic consumption is 26 million tonnes, putting pressure on domestic mill prices. The excess stock of six million tonnes remain unsold and block funds of sugar mills to the tune of Rs 19,000 crore,” it said.

One of the fallouts of the huge carryover stocks is payment due to farmers for supply of sugarcane to the mills keeps mounting.

Minister of State for Food and Consumer Affairs Danve Raosaheb Dadarao told Parliament during the Monsoon session that as on 11 September, sugar mills owed growers about Rs 13,000 crore for the crop procured last season.

PIB said in the statement that surplus production will continue as new varieties of sugarcane that have higher yield have been introduced.

Thus, to find a balance between rising sugar production and increasing dues to farmers the Government has begun to encourage ethanol production.

The government has decided that diversion of excess sugarcane and sugar to ethanol is a correct way forward to deal with surplus stocks, the PIB statement said.

"Diversion of excess sugar would help in stabilizing the domestic ex-mill sugar prices and will also help sugar mills to get relieved from storage problems," it said.

The move to encourage ethanol production will benefit the economy as India will save precious foreign exchange spent on importing crude oil.

Though India can also encourage exports by providing incentives, there are two problems with it. One, the Centre has to spend thousands of crores as export incentives.

Last season, the Government spent about Rs 6,000 crore as export incentives with sugar mills getting an average of Rs 9,750 per tonne of sugar export.

This season, the Centre would be spending about Rs 3,500 crore with the per mill export incentive being about Rs 6,000 a tonne.

Second, under the terms that India has signed to join the World Trade Organisation, it can extend such incentives only till 2023. Thus, the country needs to find other ways of managing surplus sugar production.

“The Cabinet decision will mainly benefit grain-based distillers. But some sugar mills could take advantage of the subvention interest scheme and set up dual-based distilleries or diversify. They could go in for sugarcane juice or molasses or maize or any other grain,” said ISMA Director-General Abinash Varma.

“Sugar mills will try and make use of this to access other raw materials such as maize of rice for their benefit. It would not require any major investment,” he said.

According to Simbhaoli Sugars director Sanjay Tapriya, the move to encourage ethanol production is good for the country since it creates an alternative market for sugarcane.

“It can help control the surplus sugarcane farmers produce by diverting them for ethanol. The demand for ethanol can be met through direct molasses or sugarcane juice and the balance can come from grains,” he said.

“An option can be brought into the system to use surplus grains in the country since warehouses need to be emptied. It is a win-win situation for all,” Tapriya said.

Pradhan said diversion of excess sugar will help in stabilizing the domestic ex-mill sugar prices, which are currently ruling between Rs 32 and Rs 33 a kg, besides improving the industry’s cash flows.

The ethanol production is being given a push with the Centre fixing a target of 10 per cent blending of fuel grade ethanol with petrol by 2022. By 2026, this is targeted to rise to 15 per cent and by 2030, 20 per cent.

During the current ethanol marketing year, about 325 crore litres ethanol is likely to be supplied to OMCs to achieve 8.5 per cent blending levels and the 10 per cent target will likely be achieved by 2022, the PIB statement said.

The target of achieving 20 per cent blending of fuel grade ethanol could be advanced to 2025, the PIB statement said.

This might be possible with the Centre trying to supply rice to the distilleries from the stocks maintained by the Food Corporation of India.

According to the first advance estimate of foodgrain production for 2020-21 released by the Ministry of Agriculture, kharif rice production has been estimated at 102.36 million tonnes against 101.98 million tonnes last year.

All these are indicators of surplus stocks that can be put to good use and also avoid the FCI spending on storage space and servicing its borrowings.

Though India’s maize production has been rising with growers using latest hybrids, a large part of it goes in meeting the rising demand from the poultry and starch sectors.

Thus, the ethanol-blending programme could benefit the sugarcane growers more than other farmers.