MGNREGS Under The Microscope: How It Is Playing Out In Dakshina Kannada 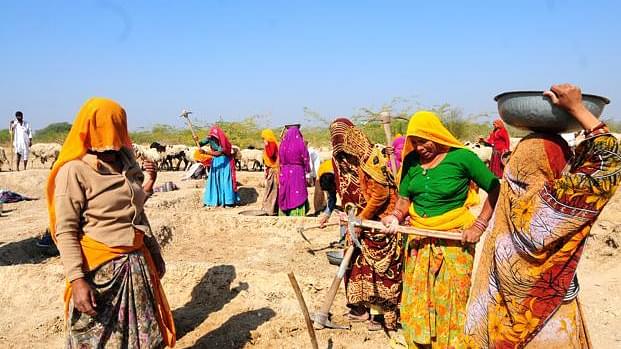 Dakshina Kannada district in Karnataka may have achieved a 11 per cent growth in implementing the Mahatma Gandhi National Rural Employment Guarantee Scheme (MNREGS) during 2017-18, but most works taken up have been related to water and buildings only.

Such an approach has helped in better execution of physical and financial targets. Not just that, since these two parameters decide the success of the employment guarantee scheme, it helps states to achieve their targets or, maybe, inch closer.

According to the district authorities, 85 per cent of the physical and financial development targets have been met for the 2017-18 fiscal.

“Despite being comparatively backward, Belthangady and Sullia villages have done exceedingly well. They have used 100 per cent finance and achieved 100 per cent physical development of the works taken up. In Dakshina Kannada district, we could generate jobs for 1.1 lakh in 2017-18. We spent Rs 33.66 crore - the highest in the state. The district achieved 74 per cent project completion in 2016-17 and 73 per cent of funds allocated were used. In 2017-18, the execution has been 11 per cent higher than 2016-17,” said Dr M R Ravi, chief executive officer of the Dakshina Kannada zilla panchayat.

As regards providing employment to Scheduled Castes and Scheduled Tribes, 31,731 people were given jobs for 100 days during 2017-18 under the scheme. This is against 11,740 the previous fiscal.

“Dakshina Kannada has created 1,13,000 mandays for just dam works. We have received steady flow of funds from the government for all works under the scheme. The average spending on all account heads ensured 87 per cent utilisation of funds,” Dr Ravi told Swarajya.

Dakshina Kannada’s performance is better than Karnataka’s average growth of 8 per cent and the national average of 7 per cent.

According to Bharatiya Janata Party (BJP) MP Nalin Kumar Kateel, who represents Dakshina Kannada constituency, every panchayat development officer (PDO) has been briefed to put in maximum efforts to complete projects on time. Balpa village was one of the most backward villages in Dakshina Kannada, but today, thanks to MGNREGS, it is the village that has completed all the projects in time with maximum utilisation of funds. Kateel said Balpa could soon be notified as the model village under the MGNREGS.

But the road to success was not easy. One of the nagging problems of the scheme is identifying work. There are generally 30-40 projects taken up in every village across the state. Going by documents, in a typical year over 100 projects are cited by various departments including agriculture, minor irrigation, forests and dry land development for funds. There is always excess of work but the amount of work taken up is less.

Another complaint is identifying beneficiary village and the individuals who are mandated to execute the work. Village panchayats that have strong political backing are likely to get multiple works. There is also migration of beneficiaries from one village to another in search of work. This results in the same unit of workers getting to do double the work.

Are enough funds being made available for these projects? Udupi-Chikkamagaluru BJP MP, Shobha Karandlaje said: “How do you quantify money when it is used for the common good? Money has never been short for rural development and rural employment schemes, it was only the willingness to work by the officials and the people’s representatives at the grass roots and the support at the higher level.”

Ananth Kumar Hegde, another MP from Uttara Kannada, says the district chouls have got more attention under various schemes of the state government for rural development. But that has not been the case.

“I do not intend to paint a rosy picture, but 60 per cent of the area I represent as a Parliament Member in Uttara Kannada are villages, hamlets with very little urban infusion. As I have seen during my travel in rural areas infested with tribals, creation of rural infrastructure can give impetus to farming and other rural activities. More emphasis has to be laid on water resources management, which is lacking in rural areas,” said Hegde.

A district authority said panchayats roughly get nine to 10 months to plan and execute projects under MGNREGS since funds are released once in a year after the central and state budgets. But since there is no tendering process, the money is spent fast on wages for those employed in these works with disbursement being made daily. Each beneficiary has to compulsorily get 100 days of gainful employment, depending on his/her skills. The Minimum Wages Act comes into picture in MGNREGS too. Every labour gets Rs 400 for eight hours of work.

A PDO, who did not wish to be identified, said that generally, there is a delay due to budgetary allocation. After the budgetary process, it will take anything from 30-45 days for the money to reach the concerned department. If the official is quick and committed, the money is disbursed quickly to the PDOs.

District authorities said that the district administration gets funding from the Centre through the state government.

The Department of Rural Development at the Centre distributes funds to the states. Projects are assessed by the state’s Department of Rural Development. Likewise, there is an assessment committee at the district level which recommends release of funding to individual district on the basis of asset creation and projected physical and financial progress. These ensure that the MNREGS functions with the least number of hurdles.

Again, all the chief executive officers of zilla panchayats must give a report to the Rural Development Commissioner on the project’s progress. The report is reviewed at secretary-level meetings, chaired by the respective state rural development ministers.

There are instances of the same work being funded twice in an accounting year. But that happens only when the work is not completed before the stipulated time for various reasons. The state’s Chief Secretary has to report to the Centre on the progress of various projects and seek further release of funds.

Sheena Shetty, a veteran rural planner who has done a lot of work under this scheme, says: “The quality of top bureaucrats in Karnataka cadre has improved after 2010. They are motivated lot and they have a vision which is helping in achieving the progress in various developmental works under MGNREGS.”

Panchayat leaders, however, say that MGNREGS does not promise much for growth of rural industries. The quality of life in rural areas is still awful and this is forcing youngsters to shift to urban areas.

“It could be a global phenomenon but India is looking an economy driven by 72 per cent of the population that is below the age of 25 in the next two years. This means these rural youth should have better quality of life, education, skill development and empowerment. There should have been an element that gives these youth something under MGNREGS,” said Prakash Narvekar, a panchayat leader in Uttara Kannada.