Get Vaccinated To Defeat The Pandemic – It Is Absolutely Safe: Trust Me, I’m 94 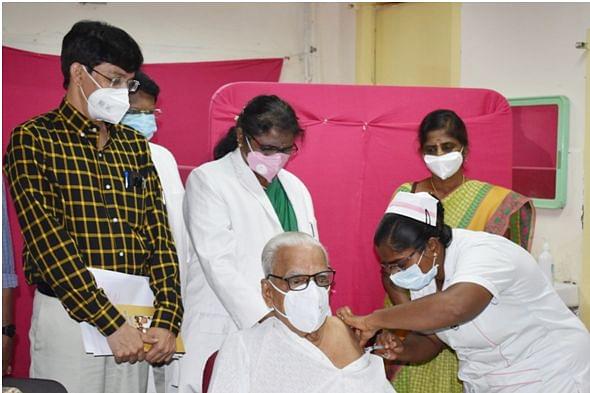 Being 94 years of age, I received my second dose of vaccine against Covid-19. I am aware that I can’t say ‘mission accomplished’ because there is still a surge of cases in Maharashtra and Kerala.

I am also aware that the mantras of ‘social distancing, masks, and constant hand washing’ have to be continued till things settle down.

I received the vaccine by virtue of being in the medical field and not by virtue of being a politician, though it gave me a double satisfaction that I received the vaccine in the Ambedkar Diabetic Block in Kilpauk Medical College Hospital, which I had the privilege of inaugurating on 22 October 1983 as Health Minister of Tamil Nadu under the leadership of Chief Minister M G Ramachandran.

Covid -19 is a disease about which we were not taught in medical school; our teachers knew nothing about it; there was no text book to refer to. Doctors now had to treat the disease on a case by case basis and put into place the best practices depending on the outcomes of previous patients.

Nurses and other staff had to put themselves and their families at risk. There was talk of viral load to explain an unexplained high mortality amongst doctors and other medical staff.

In spite of all this, we didn’t hear a single doctor or health worker refusing to treat a Covid patient. Recognising this heroic battle that the medical fraternity has put up, the Government of India has given us the choice of getting vaccinated first. This is why our doctors and nurses are getting vaccinated before prime ministers, ministers, IAS officers and other VIPs. This is unprecedented and has not happened in any other country.

When a calamity like a tsunami or earthquake hits a country, we can expect other countries to pitch in and help. In this global pandemic, nations don’t help each other; each one to its own.

Our problems have to be solved only by ourselves. We were short of PPE (personal protective equipment) to protect our doctors and health staff. It is astounding that in two months during the intense lockdown, India, which did not have a single factory that made PPEs at the beginning of the pandemic, became the world’s second largest exporter of PPEs made to world standards, and created a billion dollar industry out of thin air.

Professor Vincent Rajkumar of Mayo Clinic says in amazement about the number of Covid deaths – “India has 1.3 billion people, four times that of the US. What’s going on is just amazing and needs in depth immunologic studies. You cannot undercount 10 times the death rate. That would also mean undercounting 20 times the hospitalisations. With friends and reporters I’m in touch with across the country, India has had nowhere near the deaths the US has per capita. Life is normal even in big cities. There are three likely factors for lowering death rate in India: younger age, lower obesity rates, cross-reactive immunity from prior coronavirus and other infections. The first two alone cannot explain lower severity. There are enough older people to overwhelm the health care system. There are four other factors people have hypothesised but I don’t think they play a big role such as BCG vaccination, high temperature, Vitamin D levels and use of chloroquine, ivermectin etc”.

There could be some truth in all these hypotheses. Be that as it may, there are other reasons too which not many give credit to – one has to acknowledge that in March when the cases were 500 in India, the Prime Minister Narendra Modi had to take one of the toughest decisions – do I choose lives or livelihood?

He chose life, because livelihood could always be regained, and he imposed one of the toughest lockdowns in a large democratic country. On 24 March 2020, he ordered a nationwide lockdown for 21 days, limiting movement of the entire 1.3 billion population. It was ordered after a 14-hour voluntary public curfew on 22 March.

On 5 April, the Prime Minister asked India's 1.3 billion citizens to observe nine minutes without electricity at 21:00 local time on a Sunday. He urged them to ‘challenge the darkness’ of Covid-19 by lighting candles and lamps. Millions responded, lighting up the night sky in a show of unity. “Salute to the light of the lamp which brings auspiciousness, health and prosperity, which destroys negative feelings," Modi tweeted at the time of the vigil.

Bringing awareness to the seriousness of the pandemic in one stroke to 1.3 billion people will be studied by psychologists and experts in public policy for a long time to come.

Quarantining one person who is Covid positive either at home or a government centre (when isolation is not possible at home) prevents hundreds of positive cases months later because the spread is exponential.

Schools, colleges, marriage halls were enrolled as quarantine facilities where hundreds of thousands who were tested positive but otherwise normal were quarantined. This, according to me is the reason why our health care systems (which were expanded considerably during the lockdown) were not overwhelmed. All this did not happen in several so called developed countries. India fought a better battle. There was no confusion about masks etc.

In fact, India initiated an early response at lightning speed and also acted with scale and determination to tackle challenges posed by the pandemic and this has helped us maintain one of the lowest fatality rates in the world.

There is this tragic incident of migrants trudging back to their homes in panic before the government could arrange transport to them. But what astounded me is that there was not a single case of violence and people made their way back to their native states of Bihar and UP. Doomsayers predicted that UP and Bihar will have the highest number of cases, but that did not happen. In fact, they did better than more so-called developed states like Kerala and Maharashtra.

All should/must be happy, be healthy, see good; may no one have a share in sorrow has been the core of Indian thought and philosophy and we have been following this as far as vaccines are concerned. When big powers like China and the USA are looking inwards, India is doing its best in helping humanity while taking care of its own.

In 1947, Union Health Minister Rajkumari Amrit Kaur received Penicillin cases from Canadian Red Cross Society of Canada. In 1982, working with the Rotary Club of Madras, I, as Health Minister of Tamil Nadu received red measles and then later polio vaccines which helped us to eradicate polio from this part of the world.

A few days ago, I saw the Prime Minister of Canada contacting our Prime Minister for Covid- 19 vaccines. Indians don’t realise the importance of this development. From a seeker we have become a provider — a changing world order happening in our own life span. This is Atmanirbhar Bharat - which translates to 'self-reliant India' or 'self-sufficient India' — again, much to be proud of.

Apart from trying to be protected, one other reason why I took the vaccine was that I didn’t want to be an instrument to spread the disease. Having worked extensively for the eradication of polio, I understand the importance of vaccination.

If more people are vaccinated, we can halt the pandemic in its tracks. I sense a feeling amongst our public — the pandemic is over — I don’t need the vaccine. No it is not over. The government is ratcheting up the vaccination centres and going to open up vaccination to all who are above 50 years.

Please don’t hesitate to have the vaccine. It is absolutely safe and made in India.