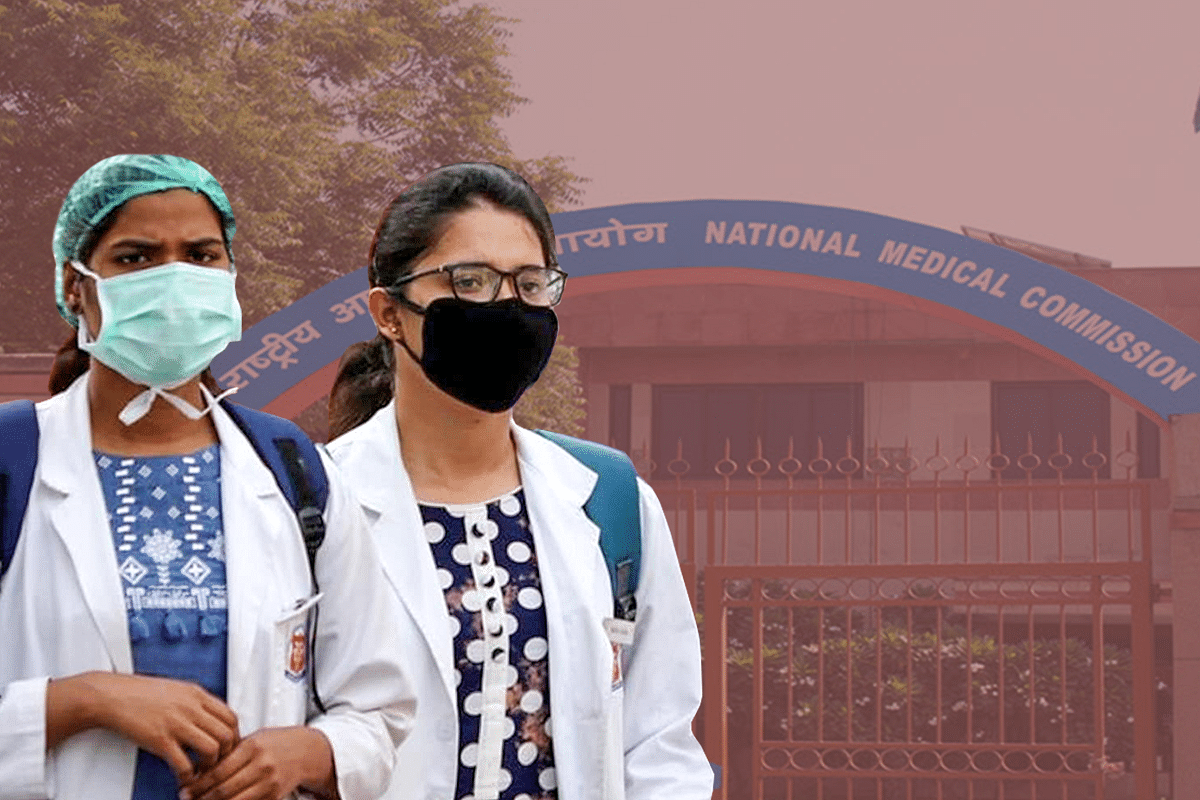 NMC to regulate 50 per cent of the seats in private medical colleges.

On 3 February, the National Medical Commission (NMC), a body that came into force only recently after the NMC act was passed in 2019, issued exhaustive guidelines for regulating fees for 50 per cent seats in private medical colleges. The NMC act, particularly Section 10(1)(i), empowers the commission to do this.

“After extensive consultations it has been decided that the Fee of the 50% seats in the Private Medical Colleges & Deemed Universities should be at par with the Fee in the Government Medical Colleges of that particular State & UT,” the memorandum issued by the NMC read.

While the move was celebrated and hailed as visionary, laughingly even called pro-poor, by the supporters of the current dispensation, this was just the latest illustration of the government’s disinterest in bringing any real change in medical education.

The only difference between the old and highly corrupt body Medical Council of India (MCI) and the new NMC is that the latter is completely in control of the central government after its powers were centralised and majority of members selected rather than elected as was the case in previous setup.

Of course, there are also no allegations of corruption against NMC (yet). Apart from that, the biggest bane of MCI - the stifling regulations that keep doctors capacity restricted especially in the private sector - has been seamlessly internalised and adopted as it was by the NMC, with added interventionist impulse or mandate like the fee regulation one.

The issue is that those who are even criticising the NMC for this regressive step are only doing so from the point of view of bad economics. This is a genuine concern because it will have negative impact on the overall capacity. Already, due to onerous restrictions and red tapism, influential political moneybags rule the roost in private medical education industry.

The fee regulation will add another hesitation for genuine edu-preneurs to open more medical colleges, what with huge financial and regulatory entry barrier (hundreds of crores of initial investment, annual license approvals, requirement of setting up various teaching departments, setting up an attached hospital with certain number of beds and what not). For all practical purposes, the monopoly of current players will remain unchallenged.

Initially, when the Niti Aayog started the process of suggesting important reforms in 2016 to overhaul MCI by replacing it with NMC, it had also recommended that fees may be regulated for a proportion of seats not exceeding 40 percent of the total seats in private medical colleges while giving full freedom to charge the fees for the rest 60 per cent. Now, the ceiling has increased to 50 per cent but even for the other half seats, they are not allowed full freedom.

Moreover, to compensate for this fee regulation aspect, Niti Aayog had recommended lifting the ban on for-profit institutions from establishing medical colleges. The Aayog had lambasted the input-based regulatory philosophy of the MCI which erected a high-entry barrier for education providers and it had recommended moving away from input-based regulation based on an inspection regime, towards a system based on outcomes and grievances redressals.

At one point, there was also a proposal to let private medical colleges increase seats and add courses without going to NMC for every approval.

But none of these good recommendations made they way into the final NMC act of 2019 while bad aspects like fee regulation were made worse (fixing fees of 40 per cent seats initially to 50 per cent seats now). If real change was introduced with substantial reduction in regulations and allowing liberalisation of admission capacity, fee regulation wouldn’t have stung much.

In any other rules-based country, bad economics would be the only primary critique of a move like fee regulation. But India doesn’t have a normal state which treats education institutions dramatically different, depending on the religion of the persons administering them. Hence, there will be two immediate legal challenges. Private colleges will challenge the NMC’s guidelines and likely lose the case thanks to populist impulses of our our judiciary.

More importantly, minority colleges will seek exemption from the guidelines because the quantum (subsidising 50 per cent seats) has the effect of neutralising constitutional protection given under Article 30 which allows them to manage and administer education institutions as they deem appropriate. In the past, the judiciary both at the high court and Supreme Court level has struck down regulations much weaker than the NMC’s that remotely sought to challenge their autonomy.

The result will also be similar. Minority colleges will be able to remain centres of excellence by retaining their financial and admission autonomy (remember that majority of their seats are reserved for people of their own religion - For ex: around 84 per cent of the seats in CMC Vellore are reserved for Christians).

Meanwhile, non-minority colleges will be battered. The quality of incoming students will drop and so will the quality of graduates. This, if they are able to compete in the market after so many compromises. It will result in crowding out of non-minority colleges by minority ones (the latter are already at par in total capacity with the former despite the population of minorities being considerably less - a major contributing factor is the taxing regulatory burden, most of which doesn’t apply to minority institutions).

The NMC memorandum on fee regulation states that, “The benefit of this fee structure would be first available to those candidates who have availed Government quota seats, but limited to the extent of 50% of the total sanctioned strength of the respective medical college/deemed university. However, if the government quota seats are less than 50% of total sanctioned seats, the remaining candidates would avail benefits of the fee equivalent to the government medical college fees, based purely on merit.”

This may sound gibberish to those not aware of the current situation. Private colleges so far weren’t exactly free from the government overreach. In various states where they were affiliated to universities governed by state laws, they surrendered a portion of their capacity for government quota. In Tamil Nadu, for instance, 65 per cent of the seats were surrendered to ‘government quota’ for which fees was charged less. Even here, the treatment to minority colleges was different (for example, they surrendered only 50 per cent seats in Tamil Nadu). This was the case in other states too.

However, the difference was that the arrangement with state governments was consensual (that’s why CMC Vellore wouldn’t surrender any of its seats for the Tamil Nadu government quota and it was given a special status). What NMC has done is made the fee regulation mandatory and uniform across the country which means that earlier a state government could encourage private colleges by not insisting on taking over a portion of their capacity. Now, that option is gone thanks to centralisation of fee regulation. Its astounding that no state is protesting against this blatant encroachment on their turf.

The situation can still be salvaged by relaxing regulations for private colleges to add more medical seats or by cutting red tape and making it easier to open new colleges. Unfortunately, the way things are going, there are little signs of the NMC moving in that direction. A historic opportunity or hope that the junking of MCI had ignited lies shattered today.