With CJI Accused Of Misconduct, Time Is Right For Judicial Accountability Bill 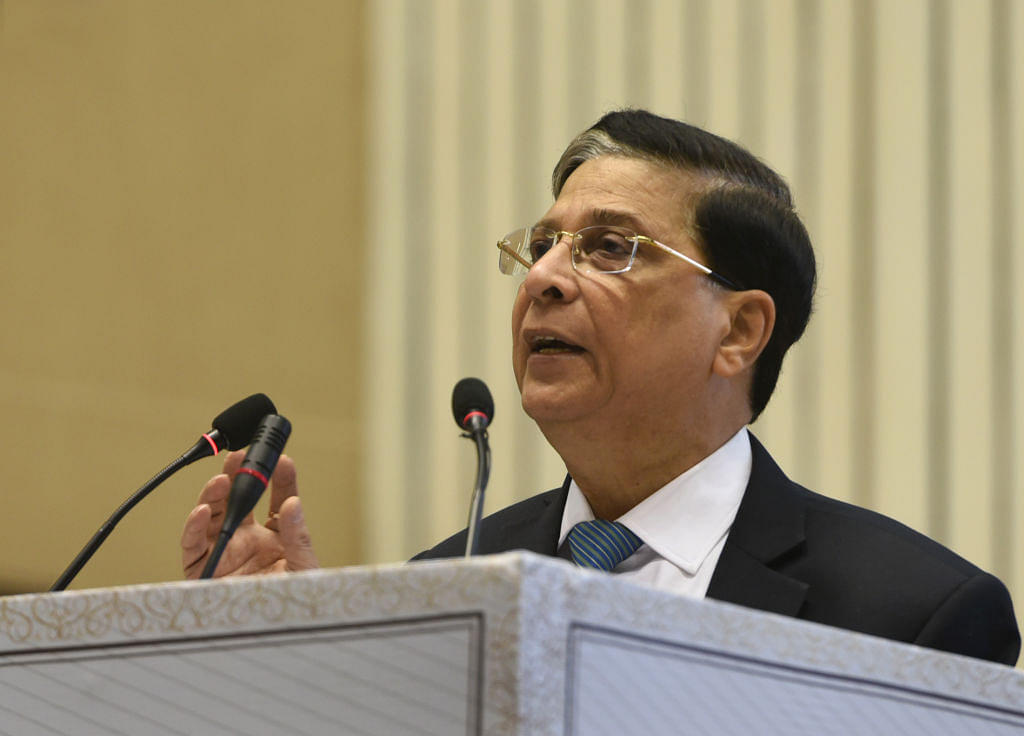 More than the shoot-and-scoot allegations and innuendos fired at the Chief Justice of India (CJI) by the four rebel judges on 12 January, it is perhaps the likes of Prashant Bhushan that need to be taken more seriously in the matter of judicial corruption. The very fact that he and his father Shanti Bhushan have been making serious allegations against senior judges for years on end – and getting away with it – implies that the apex court is stricken by a guilty conscience.

In September 2010, Shanti Bhushan told an open court that eight of the previous 16 CJIs were corrupt, and handed over an envelope with their names. But the court did nothing, and the Bhushans were not held up for contempt.

Yesterday (16 January), Bhushan Jr was at it again, and called for a probe into the alleged misconduct of CJI Dipak Misra on two counts. The Campaign for Judicial Accountability and Reforms (CJAR), which Bhushan heads, has called for a probe into the medical scam, and, more seriously, accused the CJI of forgery, for allegedly antedating an administrative order of 6 November 2017, which conferred exclusive powers on the CJI to assign cases to various benches. Bhushan alleges that the memo was “hurriedly prepared” around noon on 9 November, when Justice Chelameswar was taking up a petition on the scam, and had constituted a bench for the same. The note, claims CJAR, was antedated to 6 November to dissuade Justice Chelameswar.

While Bhushan is probably right to flag this issue, he has acted improperly by sending his complaint against CJI Misra to the next five senior-most judges, which includes the four rebel judges. One wonders how asking the same judges who levelled accusations against the CJI to sit in judgement on the case is the right thing to do. At the very least, the rebel judges should recuse themselves from hearing his complaint since they have already morally sat in judgement on the CJI’s conduct by going public with their accusations. Accusers cannot be judges.

Some history is needed to point out the facts: The medical scam case was put up for urgent hearing before Justice Chelameswar last year and he had listed it for the next day. But before this came up, the roster was put up before the CJI, and he assigned the case to a bench headed by Justice A K Sikri. But here’s the interesting part: another petition almost identical to the earlier PIL was again put up by advocate Kamini Jaiswal before Justice Chelameswar, who then decided that it must be put up before a five-judge bench headed by the CJI and the four senior-most judges, who came to the presser last Friday.

In short, Justice Chelameswar effectively decided the roster, when that was the CJI’s prerogative. The CJI struck back by setting up a five-judge bench headed by himself to decide who controls the roster, and it duly said the CJI had the sole authority to do so.

While one can fault the CJI for having to indulge in these manoeuvres, the actions of Justice Chelameswar hardly indicate good faith. It seems likely that the petitioners wanted him to be involved in the case (which is why the same petition came up again through another lawyer after the CJI moved it to another bench). It smells like forum-seeking, the very thing the four judges have indirectly accused the CJI of facilitating.

It is one thing to say that there is too much opacity in how the top judiciary functions, quite another to pretend that these things have begun to happen only under CJI Misra.

An earlier case involving Teesta Setalvad is instructive. Setalvad, an inveterate Narendra Modi baiter, along with her husband Javed Anand, have been accused by the Gujarat Police of criminal breach of trust and misuse of funds collected for victims of the Gulbarg Society killings of 2002. Here, too, the Supreme Court went out of its way to accommodate their anticipatory bail applications. The broad accusation is that Setalvad and Anand, trustees of Citizens for Justice and Peace and Sabrang Trust, put a part of the funds collected for the victims for personal use.

Within hours of the Gujarat High Court judgement on 12 February 2015, the then CJI, H L Dattu, had stayed the arrest for a week, and sent to matter to a bench headed by Justice S J Mukhopadhaya, which, while granting relief to the duo, also noted that the allegations were “grave”. But, inexplicably, on 19 February, the CJI shifted the case to another bench, coincidentally headed by the current CJI Misra, which duly quoted Edmund Burke and John Adams to extol the virtues of liberty – and hence continued the bail.

The change of bench was duly commended by the usual suspect, Prashant Bhushan, a view that once again smacks of forum seeking. If one bench can’t give you what you want, change it.

What emerges from the above two examples is that the judiciary and powerful members of the legal fraternity are easily able to influence which court or bench gets to hear their petitions.

Justice Chelameswar’s complaints against the CJI may or may not be true, but he is being economical with the truth. If actions by the present CJI seem dubious, this has been the case often enough in the past. But we heard not a murmur from the top judiciary.

The Bhushans clearly are on to something, but the right way to go about it is to quickly legislate a new Judicial Accountability Bill, and give it retrospective effect so that even the current set of accusations against the CJI can be taken up for scrutiny.

In the 2010 version of the Judicial Standards and Accountability Bill, judges, their spouses and children were expected to declare their assets and liabilities, and processes were to be created for the removal of judges in the higher judiciary (high courts and Supreme Court). The bill sought to establish a National Judicial Oversight Committee, a complaints scrutiny panel and an investigation committee. The oversight committee was to be empowered to issue advisories and warnings to judges, and it could also recommend the removal of judges to the President.

While the judiciary found fault with many aspects of the bill, an improved version of the bill is clearly need of the hour. Without it, there is no fair and transparent procedure for filing complaints against judges, and no way of removing corrupt judges except through impeachment by Parliament. In the last 67 years, ever since the Constitution came into force, only three judges were even sought to be impeached. The impeachment of one (Justice V Ramaswami in 1993, with Kapil Sibal defending him) failed, and two others (Soumitra Sen in 2011 and P D Dinakaran in 2016) resigned before impeachment proceedings could be completed against them.

We need a Judicial Accountability Bill as of yesterday. The NDA government had restarted work on the bill two years ago, but nothing much has been heard about it so far. Maybe, this is the time to fast-forward the bill.