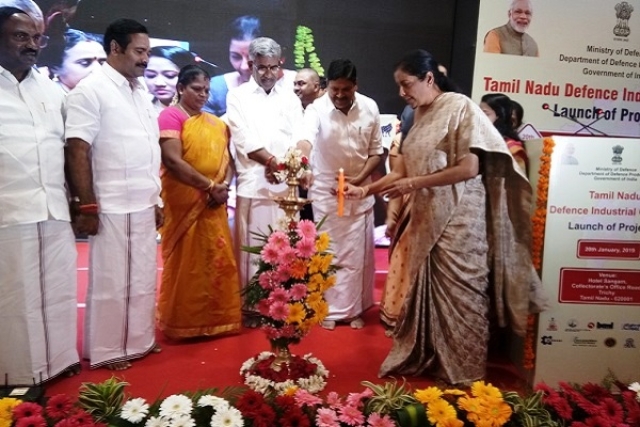 Tamil Nadu government has unveiled its new ‘Aerospace and Defence Industrial Policy’ providing a plethora of sops to attract investment in the sector, The Hindu Business Line has reported.

Titled the ‘Tamil Nadu’s aerospace and defence industrial policy 2019’, it was released by the Union Defence Minister Nirmala Sitharaman at the inaugural session of the Global Investors Meet (GIM) on Wednesday (23 January). The first copy was received by Tamil Nadu Chief Minister Edappadi K Palaniswami.

The policy initiatives comes three days after the launch of Tamil Nadu Defence Industrial Corridor at Tiruchirappalli on 20 January. The state is aiming to emerge as India’s defence and aerospace manufacturing hub.

Tamil Nadu, which is among India’s economic powerhouses, has build a successful automotive sector and is hoping to make inroads in the defence and aerospace sector. It aims to attract investments worth $10 billion in the next ten years generating direct and indirect employment opportunities for 1 lakh people.

To attract global OEMs, tier-I suppliers and Indian majors to set up their units in Tamil Nadu, the state will provide enormous flexibility in labour laws including allowing the hiring of contract labour, 24x7 operating hours, and employment of women in night shifts.

Under the new policy, the list of incentives which the state will offer to new/existing manufacturing units in defence/aerospace domain include:

KNN India quoted former President of Tamil Nadu Small and Tiny Industries Association (TANSTIA) C Babu as saying that the new policy will help in the development of MSME entrepreneurs in the aerospace, defence and defence-related sectors.