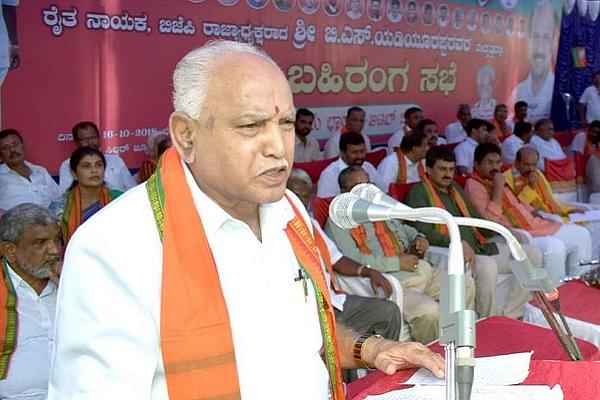 Senior BJP leader and former Karnataka Chief Minister B S Yeddyurappa on Friday (18 March) slammed the Congress’ allegations that he had made payments to the tune of Rs 1,800 crore to the BJP and its various leaders.

As per media reports, the Congress spokesperson Randeep Surjewala had alleged the presence of a ‘diary’ with contained entries of payments made to various BJP leaders.

The Caravan magazine which had earlier done a ‘caste analysis’ of Pulwama martyrs published a report alleging that Yeddyurappa had made payments to the BJP leaders to clinch the Chief Ministership of the state.

It alleged that Yeddyurappa paid BJP Central Committee Rs 1,000 crore, and Rs 800 crore to senior leaders of the party.

These sensational allegations have not been taken lying down by Yeddyurappa who has threatened legal action and asserted that the diary is fake.

Absolute nonsense, disgusting & desperate efforts by @INCIndia to release such fake diary, prove it at the earliest or face defamation case. pic.twitter.com/3sMkYTd3Kb

In a twitter post, Yeddyurappa went all guns blazing at the Congress and challenged it to prove the allegations or face defamation case.

He alleged that the Congress and its leaders are bankrupt of ideas and don’t have any developmental issues to discuss. He added that Rahul Gandhi’s party is frustrated with the growing popularity of Prime Minister Narendra Modi.

Commenting on the issue, Yeddyurappa said that the matter has already been probed by the Income Tax department and has been found to be fake. Before calling it a “closed chapter”, he claimed that the Congress planed the story in the media.