After #MeToo, #NunToo Is Here: Women In Churches Speak Out Against Culture Of Sex Abuse 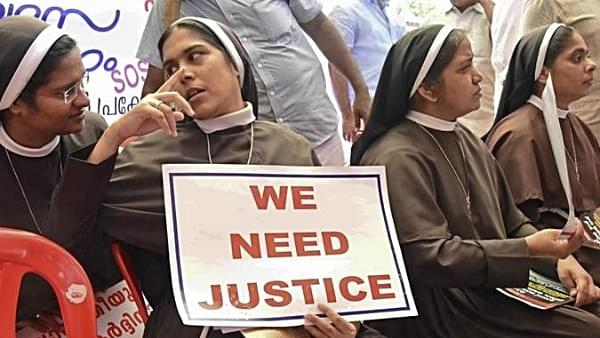 As an issue that has long been under the wraps, sexual abuse of nuns has been gaining ground in the era of #MeToo and a #NunsToo movement has emerged, reports NPR.

Women Church World, a supplement of the official Vatican daily, L'Osservatore Romano published an article in the February issue by editor Lucetta Scaraffia based on hundreds of stories she heard from nuns of sexual abuse they faced in the church. She blamed abuse of women and minors on the clerical culture of the all-powerful priesthood.

"These nuns believe they're the guilty ones for having seduced that holy man into committing sin because that's what they've always been taught," she says.

Even worse, when they become pregnant, they become outcasts from their orders. "These poor women are forced to leave their order and live alone raising their child with no help," she says. "Sometimes they're forced to have abortions — paid by the priest because nuns have no money."

Sister Catherine Aubin, a French Dominican nun who teaches theology at the Pontifical University of St. Thomas in Rome says that women inside the male Vatican world are “unobserved, invisible, ignored and not respected."

The first extensive report on sexual abuse of nuns was by in 1994 by an Irish nun, Sister Maura O'Donohue covering more than 20 countries. She linked sexual abuse of nuns in Africa to the AIDS epidemic. Religious sisters became target of sexual assault as they were considered less likely to carry the virus. She reported several cases of nuns being impregnated by priests and then being thrown out when they complained. She also noted cases of abortions paid by the priests to get rid of the pregnancy. Women often died in such procedures.

O'Donohue briefed the Vatican about her findings but her report was shelved, only to be brought to light in 2010. The church has been globally criticised for a culture of secrecy and silence around rampant sexual abuse in church. Recently, Pope Francis had spoken out on the issue publicly.

Also: [Watch] Vatican Summit On Sexual Abuse: Why The Catholic Church Still Doesn’t Get It

"I think the movement of #MeToo has absolutely an influence on the fact that the abuse of nuns comes into the press and on the public forum," says Karlijn Demasure, a Belgian expert on sexual abuse of minors and vulnerable adults who teaches at the Pontifical Gregorian University in Rome.

The Situation In India

Closer home, Kerala nun rape case caught the attention of media last year. The accused bishop Franco Mulakkal was arrested only after nuns carried out an agitation and has since been released on bail. He was welcomes with garlands and flowers on his release. Few days after the bail, a key witness in the case Father Kuriakose was mysteriously died. The nuns also claimed that they faced threat from Mulakkal.

The protesting nuns have been subjected to several hardships since then. They have been ordered out of the Kottayam convent where they stayed, a decision they said meant to punish them for speaking out. They alleged that despite being relieved of his official duties the rape-accused bishop still wielded influence in the church. The Syro-Malabar church issued a directive to ‘discipline’ protesting nuns.

In a notice served to the victim nun recently, the congregation called the nun’s participation in panel discussions of television channels and authoring articles for non-Christian newspapers a ‘grave scandal’ and threatened them to leave themselves or be ousted. The nuns were also denied money for medicines and essential goods as a punishment for going public with their accusations.

The nuns also approached the communist government in Kerala led by Pinarayi Vijayan, writing him letters personally, requesting his intervention in the case. The nuns said that they were being punished for speaking out and that their transfer from the convent should be quashed. The cold shoulder from the Kerala government despite repeated requests and protests, in sharp contrast to its zealous conduct in Sabarimala issue, invited criticism from different media sections.

Also read: Church Of South India Caught In A Web Of Irregularities

Church’s Meddling In Politics Deserves A Response: India Must Derecognise The Vatican