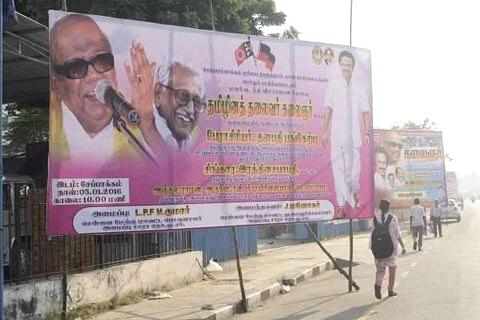 The Dravida Munnetra Kazhagam is back in the news again and for all the wrong reasons. A report by Mirror Now shows how pedestrian pavements along the Grand Southern Trunk Road (GST Road) connecting the Chennai International Airport to Nandanam has been damaged to insert poles to support banners for the Dravidian party’s recently deceased patriarch M Karunanidhi.

According to the report, not only have the pavements been blocked off to pedestrians, but they have also been damaged – with holes in the slabs – to insert the wooden poles to support the banners.

The Madras High Court had earlier said that such banners should not be inconvenient to the general public and also made it clear that such banners could not be put up without prior permission of the Greater Chennai Corporation (GCC). The DMK had cried foul when its rival the All India Anna Dravida Munnetra Kazhagam (AIADMK) had inflicted similar damage on public property. However, the matter has come to bite them now.

This isn’t the first time that the DMK had been caught on the wrong foot as far as banners damaging public property is concerned.

Back in June, freshly laid roads in Tiruchhirapalli (Trichy) were dug up to erect banners welcoming DMK president M K Stalin to the city. Incidentally, this happened merely days after Stalin had to publicly apologise for doing the same on Chennai’s roads and was the third such incident in Trichy in the recent months.

Back in November 2017, social media erupted in anger after a motorist was killed after colliding with the illegal scaffolding erected for a similar banner in Coimbatore.

Reclaiming The Pavement For The Pedestrian: Ten Ways To Implement This