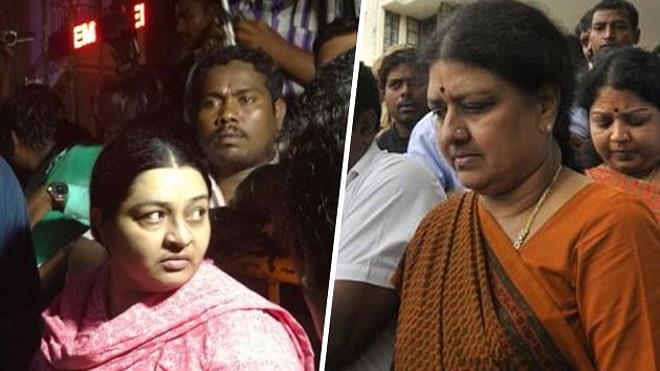 Deepa claimed this after she was stopped from entering the residence (Veda Nilayam) and thrown out of the property guarded by relatives of Sasikala.

During the outburst, she said, her sibling should be "punished" for "killing" Jayalalithaa. "He is culpable like Sasikala. He killed Amma along with her (Sasikala). They did it for the money.”

She said “There is something happening within Veda Nilayam. That is why they did not let me in. I appeal to all AIADMK party workers to save the party.”

Sources said Deepa and her younger brother engaged in a war of words within the property's compound, and “hit each other”.

Deepa claimed that she came on her brother’s invitation, but was hit and pushed outside. But it appears that Deepa's visit was well planned with members of her outfit, MGR Amma Deepa Peravai, sending WhatsApp texts to media houses seeking coverage. The situation turned ugly after private security inside the Poes Garden residence allegedly roughed up and injured a reporter and a cameraman working with a private English news channel.

Deepak, who spoke to a private Tamil news channel, confirmed that he had invited his sister to Veda Nilayam. "She came and garlanded a portrait of Amma on the premises. Nobody attacked her, no one pushed her," he said.

Deepa, who was accompanied by her husband, K Madhavan, who had fallen out with his wife, a few months ago, said she would be filing a criminal case against Deepak for "cheating" her and for "conspiring with Sasikala" to kill her aunt.