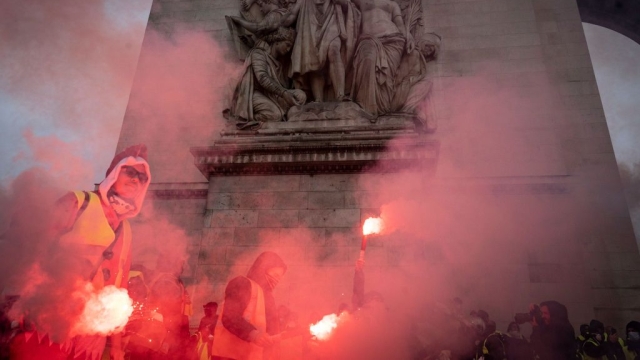 Authorities in France will deploy at least 8,000 riot police and gendarmes in Paris on Saturday (8 December), and 89,000 forces across the country as it braces up for Yellow Vest movement's planned weekend protests against the Emmanuel Macron government, Insider has reported.

With authorities fearing violence by the protestors, Paris’ iconic Eiffel tower, as well as the Louvre museum and shop-fronts along the Champs-Elysees, will be shutdown as a precautionary measure. The move to secure the city's famous landmarks follows damage to the Arc de Triomphe monument last week.

On Thursday (6 December), Yellow Vest leader Eric Drouet said "Saturday will be the final outcome. Saturday is the Elysee," adding "we all would like to go to the Elysee."

A French Daily Le Figaro reported that Saturday's demonstrations could witness unprecedented violence, as it may see the coming together of "hard core radicalised" elements, from "both the extreme right and extreme left."

Thousands of people have been rallying against higher fuel taxes and President Macron's economic policies. The demonstrations have come amid mounting discontent with Macron, who many view as out of touch with ordinary people.

The demonstrations, which began on 17 November, took a turn for the worse last weekend with more than 130 people injured and 412 arrested as riots engulfed Paris. Shops were looted, and cars were set ablaze in upscale neighbourhoods including the famed Champs Elysees avenue.

Earlier this week, French President Emmanuel Macron completely abandoned a previously planned fuel-tax increase in a further climb down from an earlier decision agreeing to delay its implementation for six months in response to violent protests in Paris.

Prime Minister Edouard Philippe told French lawmakers on Wednesday (5 December) that “the tax is now abandoned” and will not be included in the 2019 budget.

The price of diesel, the most commonly used fuel in French cars, has shot up by around 23 per cent over the past 12 months to an average of €1.51 ($1.71) per litre, its highest since the early 2000s. Macron government further raised its hydrocarbon tax this year by 7.6 cent per litre on diesel and 3.9 per cent on petrol, as part of a campaign for cleaner cars and fuel.

The trigger for the protest was a proposal (now abandoned) to further increase the tax by 6.5 cent on diesel and 2.9 cent on petrol, effective 1 January 2019. The government reportedly said it wouldn’t bow down to the protestors by rolling back gas levies.