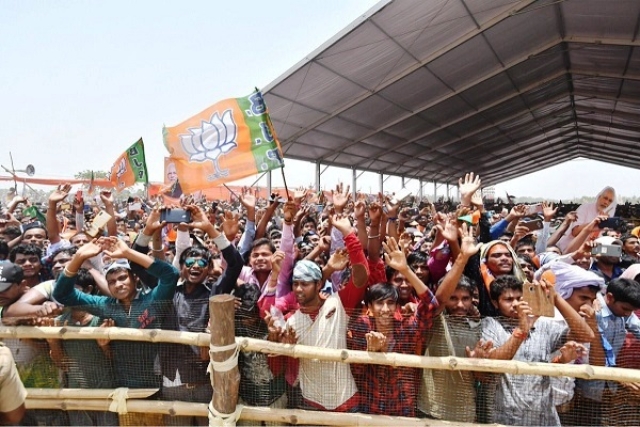 A sea of supporters welcomed Prime Minister Narendra Modi while he addressed a packed rally in West Bengal’s Purulia on Thursday (9 May).

Prime Minister Modi shared a video of a road being flanked by countless BJP supporters while his vehicle was on route to reach the rally venue. He also declared that such an overwhelming support is a sign that West Bengal is all set to elect BJP.

See how people came out in large numbers on the streets of Purulia. The writing on the wall is clear, West Bengal is set to choose BJP! pic.twitter.com/2eFhSq2HKC

This was complimented by a large crowd which was waiting for the Prime Minister at the rally venue. During the speech Modi attacked Mamata by accusing her and her party of harassing and looting innocent people.

He though assuaged the listeners by saying that the BJP won’t allow the TMC to impose thuggery, loot, bullying and nepotism on the state.

Such a positive response from the BJP supporters in Purulia could be termed as a snub to the intimidation tactics resorted to by alleged TMC goons which also are said to have resulted in the murder of BJP workers.

Last month, a 22-year-old BJP worker, Sisupal Sahis, was found hanging from a tree in West Bengal's Purulia district. He was a member of the BJP Youth Morcha and his father is a deputy pradhan of the Sirkabad gram panchayat.

Purulia has witnessed deaths of BJP cadre earlier as well. In last year's panchayat elections in the state, which witnessed intense violence, 20-year-old Trilochan Mahato's death in Purulia was followed by the death of another worker, Dulal Kumar.

Both of these deaths were claimed to be political murders. West Bengal's Purulia is a former Maoist bastion that is now emerging as a BJP hub.