Irony Of Chennai: In Land Ruled By ‘Two Leaves’, There Is No Scope For Others 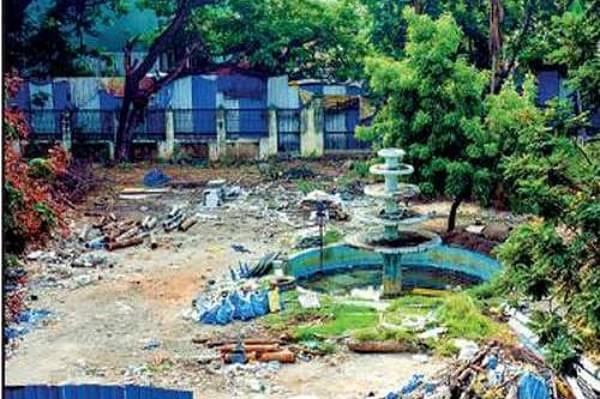 Lone Square Park in Broadway, Chennai, is in shambles.

The sealed Lone Square Park in Broadway, which was once used to store material for the metro rail work in North Chennai, is in shambles with extra material and garbage scattered all over, as reported by TOI.

Chennai Metro Rail Ltd (CMRL) has not yet restored the park despite the construction of metro stations in Mannady and Washermenpet almost being complete. Huts have come up along the frontier of the park, that used to be a welcome relief for residents living in the congested locality.

“When I moved to Chennai a decade ago, we went to the park for evening walks. It was the only escape from the concrete jungle we live in,” said Bhavana, a resident.

The debris left behind due to the construction has left the once evergreen park in tatters. The fountain where residents used to sit and catch up after a long day is now dry and soiled, leaving residents frustrated.

“Back in 2003, the proposal of converting this park into a parking lot for trucks was put off after then councillor, Krishnaswamy, moved a petition against it,” said Santhanam, a resident, adding that the metro rail had taken over the park five years ago. “Since then, trees have been cut, and huts have come up. No action has been taken to restore the park,” he said.

Officials from CMRL have said that the park would be restored by March 2019. “The work is at different stages of completion. It is not just CMRL, but several other departments that are involved. Work to restore the park will be taken up and is expected to be over by March 2019,” said an official.