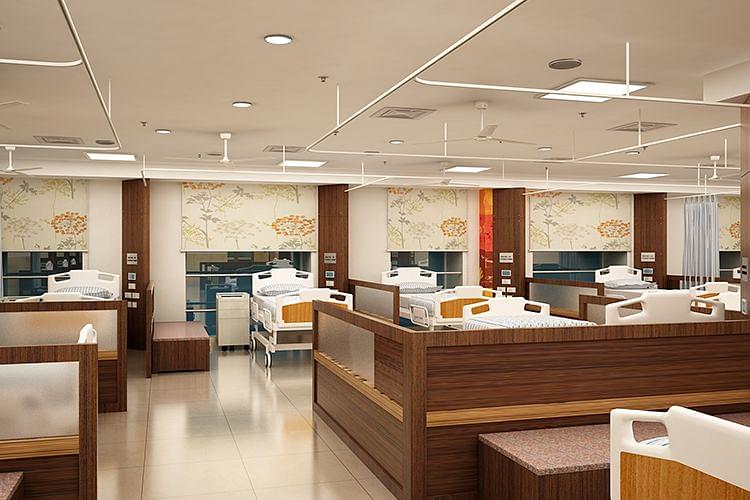 Built by Ahmedabad Municipal Corporation, the 78 m high, 1500-bed hospital is equipped with all the modern amenities, including an air ambulance.

During the inauguration, PM inspected the facilities at the hospital. He lauded the efforts of the Municipal Corporation for setting up a world class hospital and said, “Sardar Vallabhbhai Patel Institute of Medical Sciences and Research in Ahmedabad will prove to be a model for other government hospitals in the country.” He added that very few municipal corporations in the country have come forward with such a world class healthcare facility.

Built at a cost of Rs 750 crore, the the 18-storey state-of the-art super-speciality hospital will provide world class services at an affordable price and is linked with Ayushman Bharat.

Addressing a gathering on this occasion, Mr. Modi emphasised the importance of Ayushman Bharat saying, “It is because of Ayushaman Bharat that there is an increasing need for new hospitals even in smaller towns. New hospitals are opening faster, the demand for doctors and paramedic staff is increasing, thereby creating many employment opportunities for the  youth in the healthcare sector.”

According to the Prime Minister, the 1,500-bed hospital is “the first government hospital with a helipad for the air ambulance”. Billed as a completely paperless hospital, Prime Minister said it will serve the common man and support the overarching vision of Ayushman Bharat.

The Prime Minister said the country has seen a major expansion in healthcare facilities and medical education over the past four years which will be of great help in meeting the health care needs of the citizens.

PM lauded Sardar Patel’s role as the mayor of Ahmedabad, who led by example with his drive for health, hygiene and cleanliness in the city. “The country knows Patel Saheb as a visionary leader and a messiah for the farmers, but along with that, he was very enthusiastic about cleanliness and health. When he was the mayor of Ahmedabad, cleanliness and health were his top priorities. Today, wherever his soul is, will be greatly satisfied to see his city flourish in this way.”

The Prime Minister also added, “Earlier, the poor would hesitate to even enter a big hospital. Now, over 50 crore poor have faith that even for critical illness, the government stands with them, and will provide them with medical facilities.”

In a lighter vein, the Prime Minister said, it is his first visit to Gujarat in the New Year, at a time when festival season is around and what better time would it have been to dedicate a big health care facility for the people of Ahmedabad .