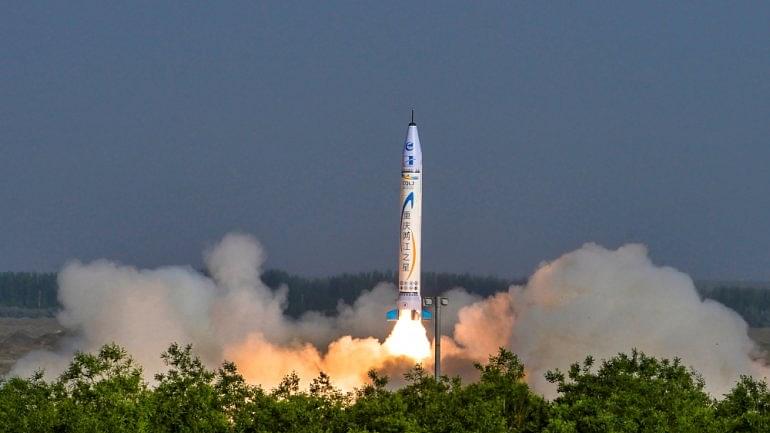 OneSpace’s OS-X rocket launched from an undisclosed location on Wednesday.

OneSpace, a startup based in Beijing, became China’s first private company to launch a rocket earlier this week, triggering a race in the country’s burgeoning commercial aeronautics and space industry.

The company hopes to become one of the biggest small-satellite launchers in the world and is planning perform as many as 10 major launches next year.

The founder and Chief Executive Officer of SpaceOne, Shu Chang, does not shy away from a comparison with Elon Musk's SpaceX.

"OneSpace's situation right now is very much like where SpaceX stood in its early years. SpaceX is the first in the US. We're the first in China," he told CNNMoney in an interview ahead of the launch.

However, the company is still a long way from matching SpaceX’s achievements. Its first rocket is just 30 feet tall and can only carry about 220 pounds into orbit. In comparison, SpaceX’s first rocket, the Falcon 1, is 230 feet tall and has a lift capacity of more than 50,000 pounds. But Shu contends that “this is the first rocket developed and built entirely with homegrown technology” and the company plans to build rockets capable of lifting larger satellites and humans into space.

The company appears to be emulating SpaceX by following the ‘privately-run and government-funded’ model. Musk’s SpaceX, in its initial journey, had benefited greatly from contracts given by the state-run National Aeronautics and Space Administration. SpaceOne too is said to have been funded by China’s State Administration for Science, Technology and Industry for National Defense. China’s state-owned Aviation Industry Corporation reportedly bore the cost of the first flight.

But even as private space firms in China get ready to snap at the heels of their dominant American rivals, it remains unclear if players in the US and Europe would ever be able to avail their services. The strict control in the west on export of satellites, which were until few years ago classified as weapons, could limit the access for Chines firms to the industry estimated to be worth about $339 billion.