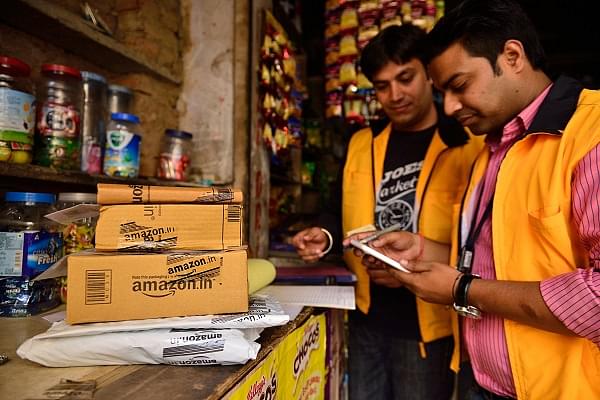 An Amazon pick up point in New Delhi. (Photo by Pradeep Gaur/Mint via Getty Images)

The year’s festive season has seen a 71 per cent rise in the number of online shoppers, thanks to an aggressive marketing campaign combined with steep discounts by e-tailers. The number of online customers from Tier-II cities more than doubled from five million in 2017 to 11 million this year during the pre-Diwali five-day sale period Mint, has reported.

Close to 24 million people shopped online in India during the festive season, mostly purchasing mobile phones and electronic goods, which made up 80 per cent of the Gross Merchandise Value (GMV). The figures are a huge jump from last year when only 14 million customers bought goods online during festival sales.

E-commerce giants like Flipkart and Amazon offer heavy discounts before Diwali, leading to a surge in online shopping during the period. GMV sold in this year’s festive season has risen to $4.3 billion compared to $3 billion in last year’s festive months. Although a vast majority of sales were in the mobiles and electronics category, which grew by 50 per cent, a significant proportion of sales were also in the large appliances (10 per cent) and fashion (11 per cent) categories.

Both Flipkart and Amazon reported record numbers during the festive period, together generating a total of $1.5 billion of GMV in the initial days of this year’s sale.