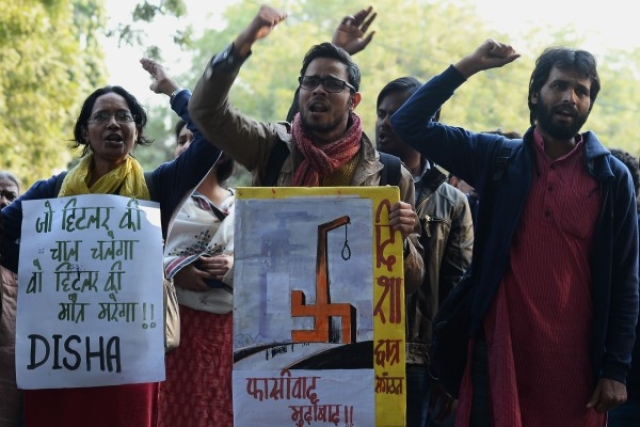 In a congregation against the historic verdict pronounced by the Supreme Court of India in the prolonged Ram Janmabhoomi-Babri masjid land dispute case yesterday (9 November), a group of students of the Jawaharlal Nehru University (JNU) in Delhi organised a protest meet, reports The Hindu.

With about 50 youth in attendance at the "protest" against the Supreme Court judgement that awarded the entire disputed land in Ayodhya to the Hindu side, speakers at the gathering made highly critical remarks against the judicial system, the authorities and the political parties of the country.

While the speakers at the "protest" targeted Hindus, they were repeatedly interrupted by another group of students celebrating the Ayodhya verdict right opposite to this gathering, with chants of "Jai Shri Ram".

Organiser of the protest which took place at the Sabarmati Dhaba within the campus of JNU, Sharjeel Imam asserted that the top court had failed the Muslims. He said, "We organised a meet to discuss the judgement. We had a copy of the judgement and discussed some crucial portions of it and how the judiciary has again failed us."

Imam further went on to claim that the much-awaited judgement by five of the senior most judges of the Supreme Court, including Chief Justice Ranjan Gogoi and the successive Chief Justice designate SA Bobde, would go on to have implications for research students and how they should study the Constitution of India.

Meanwhile, it should be noted that the all-powerful five-judge bench of the top court had delivered a unanimous verdict on the matter, quashing the claims of exclusive possession of the 2.77 acres plot made by both the Nirmohi Akhara and the Sunni Waqf Board.