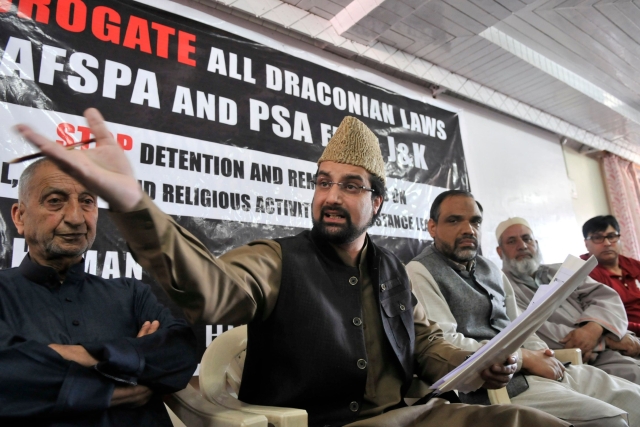 Mirwaiz Umer Farooq, chairman of the Kashmiri separatist outfit Hurriyat Conference, on Monday (8 April) appeared before the National Investigation Agency (NIA) in Delhi in connection with a case related to terror funding, The New Indian Express has reported.

According to the report, Farooq was summoned two times earlier by NIA on 11 and 18 March but had expressed his inability to join the investigation in Delhi, citing concerns about his security in view of “conditions of hostility”.

The separatist leader was provided security upon his arrival at the Indira Gandhi airport as promised by NIA in his third summon issued last week. He was accompanied by other separatists including Abdul Gani Bhat, Bilal Lone and Maulana Abbas Ansari.

The NIA is reportedly investigating the chain of players behind the financing of terror activities, stone pelting on security forces, burning down of schools and damaging government establishments.

Pakistan-based terrorist Hafiz Saeed, who heads Jamaat-ud-Dawah (JuD), a front of banned terror outfit Lashkar-e-Taiba’s (LeT), has been named as an accused in the case. Besides, organisations such as the Hurriyat Conference factions led by Syed Ali Shah Geelani and Mirwaiz, Hizbul Mujahideen and Dukhtaran-e-Millat have also been named.