Shooter Suspected Of Killing Three People At US Naval Base Was A Member Of Saudi Air Force: Florida Governor 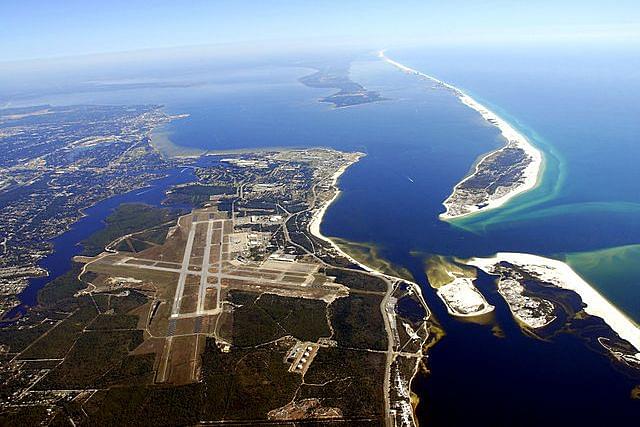 US Naval base at Pensacola, Florida ( Kevin King/Wikipedia)

The gunman suspected of killing three people and wounding seven others in a shooting attack Friday (7 December) morning at a United States Navy base in Pensacola, Florida, before being gunned down by a sheriff's deputy was a member of the Saudi Air Force, the state's governor confirmed.

DeSantis, who had tweeted about the incident earlier Friday, traveled to Pensacola and spoke with journalists upon his arrival.

In a press conference hours earlier at the naval base, which is still closed, Escambia County Sheriff David Morgan and representatives of the US Navy and the city of Pensacola said that four people had died, including the shooter, and that seven individuals wounded in the attack were hospitalized.

One of the gunman's victims died at Baptist Hospital in Pensacola and the other two perished at the scene, which Morgan compared to the "set of a movie."

The sheriff urged the media to be patient, saying an investigation is under way and that officials cannot provide all of the information about the case.

In response to reporters' questions, Morgan said the shooter was "neutralized" by a member of the sheriff's office but refused to speculate on whether the incident was an act of terrorism.

Although Morgan did not name the slain suspect, US military and law enforcement sources identified him as Mohammed Saeed Alshamrani.

The shooting occurred shortly before 7 am (local time) on two floors of a building where classrooms are located.

Two of the people hospitalized were sheriff's deputies who entered the building while shots were being fired. One was shot in the arm and the other in the knee, but their lives are not in danger, Morgan said.

US President Donald Trump said on Twitter after the Pensacola shooter was identified that King Salman of Saudi Arabia had called him to express his condolences.

"The King said that the Saudi people are greatly angered by the barbaric actions of the shooter, and that this person in no way shape or form represents the feelings of the Saudi people who love the American people," Trump tweeted.

The Naval Air Station Pensacola employs more than 16,000 military personnel and over 7,400 civilians.

The shooting in Pensacola came two days after a US Navy sailor, identified by the US Navy on Friday as Machinist's Mate Auxiliary Fireman Gabriel Antonio Romero of Texas, killed two shipyard workers and wounded another before fatally shooting himself at Joint Base Pearl Harbor-Hickam in Oahu, Hawaii.

All three of the shipyard workers were civilians employed by the US Defense Department. The two killed in the shooting were identified Friday by the Navy as Vincent Kapoi, Jr. and Roldan Aguinaldo Agustin, both of Hawaii.