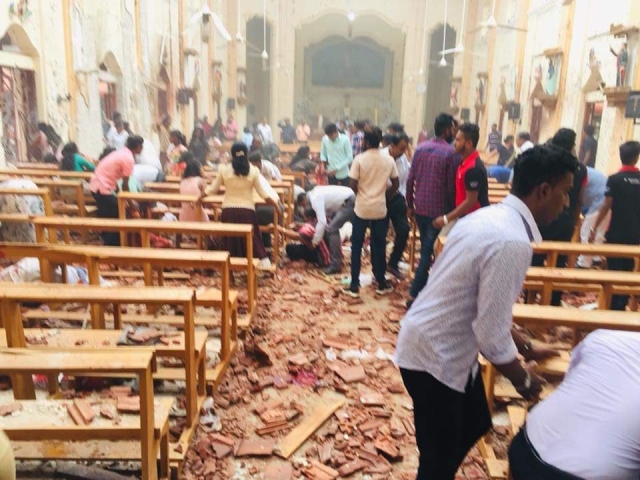 The embassy said in a statement that the four Chinese scientists were from the Chinese Academy of Sciences and the First Institute of Oceanopgraphy under the Ministry of Natural Resources of China, who arrived in Sri Lanka in the mid of April for research purposes. Their bodies had been found and identified by family members.

Among them, 38-year-old Li Jian and 35-year-old Pan Wenliang were senior engineer at the South China Sea Institute of Oceanology of the Chinese Academy of Sciences (SCSIO). Two others, Li Dawei, 30, and Wang Liwei, 26, were from the First Institute of Oceanography under the Ministry of Natural Resources, according to the institute's website.

Both institutes' website turned black and white on Tuesday to mourn the dead scientists.

Li Jian, along with four other scientists, arrived at the Kinsbury Hotel in Colombo on April 18 and 19, respectively. They were expected to participate in a joint scientific cooperation between China and Sri Lanka, the SCSIO said.

It said that when the hotel was bombed on April 21, Li Wei and the other three were immediately killed, and five others were injured. Another five scientists from the Chinese Academy of Sciences were also injured during the explosions, all of whom already went back to China for further treatments.

The Chinese embassy said earlier confirmed that two Chinese people were killed in the bombings and four others were feared dead.

The Chinese Embassy in Sri Lanka on Wednesday strongly condemned the terror acts, offered deep condolences for the death of the four scientists, and thanked the Sri Lankan government for its assistance.

A string of suicide bombings were conducted at hospitals and churches across Sri Lanka on April 21, killing more than 250 people. The Sri Lankan Foreign Ministry, said 42 foreign nationals were among the casualties.