Watch: Artist Walks On Bengaluru Road In Spacesuit To Protest Against Moon Crater Like Potholes 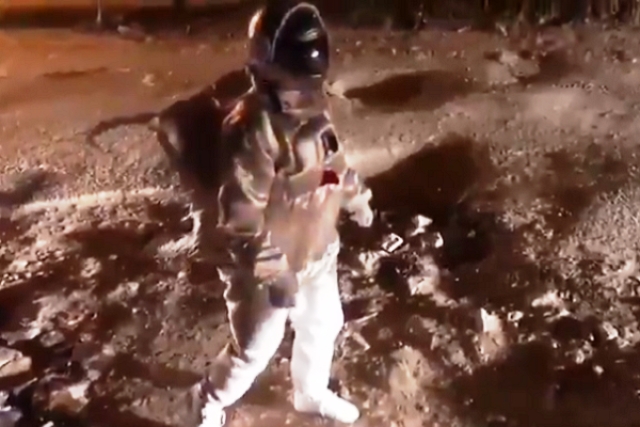 A Bengaluru artist named Badal Nanjundaswamy in a bid to protest against the pothole menace in the city decided to walk on a pothole riddled road in spacesuit to give an impression of a moonwalk.

Here is the video released by Nanjundaswamy which was shot in the city’s Herohalli area.

As per a Bangalore Mirror report, the video was shot on Saturday night (31 August) and seeks to draw the BBMP’s attention to the pothole menace in the area.

Nanjundaswamy said that while the city has various pothole ridden roads, the condition of this particular stretch was especially shocking. He thus along with this team and the cooperation of local residents gave the potholes a touch-up to make them look like a lunar surface.

Residents claim that they have been persistently urging the local corporator to fix the road but their requests have fallen on deaf ears for the past two years. The BBMP has also been accused of not repairing non-functional street lights which are leaving various roads accident prone.