‘You Blessed Us With 300 Seats, We Scrapped Off Article 370 From Jammu And Kashmir’ Says Home Minister Amit Shah 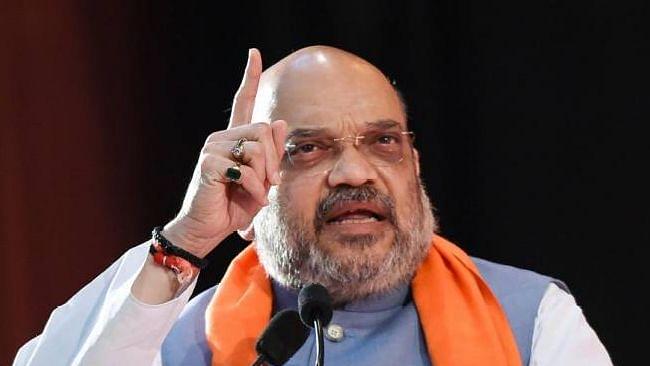 "You blessed us with 300 seats (in Lok Sabha), we have scrapped the Article 370 in Jammu & Kashmir and brought the Kashmiris into the national mainstream," Shah boomed.

He lashed out at the opponents of the move and urged the gathering to "question" such people, and propagate the glorious achievement of striking down Article 370 in each and every home in their villages.

"Now, we have initiated several measures for the upliftment, progress and prosperity of the backward and downtrodden classes. We will ensure that justice is done to all our brethren who have been suffering since 70 years," Shah said.

Recalling the contributions of the great saint revered by the Vanjari community, the BJP chief said it was the blessings of saint Bhagwanbaba that his first engagement after elections were announced in Maharashtra, was in Bhagwangad for the auspicious occasion of Dassehra.

On his second visit to Bhagwangad since 2014, Shah said he would not make any political speeches but extended his warm greetings to the people on the occasion of Dassehra, symbolising the victory of good over evil.

Earlier, Shah was accorded a rousing reception in Sawargaon - the birthplace of Bhagwanbaba - where he arrived to lend muscle to a show of strength organised by the Munde sisters, here on Tuesday.

Shah was received by Maharashtra state minister Pankaja Munde, her sister and Beed MP Pritam Munde and others, with a procession of vehicles with people waving 370 tricolours, symbolising the recent abrogation of Article 370 in Jammu & Kashmir.

On the dais, he performed an 'aarti' before an image of Bhagwanbaba and later smiled as a party activist offered a traditional Maharashtrian 'pheta' (headgear) to him amidst huge applause in the presence of Speaker Haribhau Bagade and other dignitaries.

Shah specially arrived in Beed to attend the annual Dassehra rally organised by the Munde sisters, in the district which is the stronghold of the family of late Union minister Gopinath Munde.

The BJP chief's visit has parked off intense political speculation, coming at the height of campaign for the October 21 Assembly election in which the BJP-Shiv Sena alliance led by Chief Minister Devendra Fadnavis is hoping to make a grand return.