Cabinet Reshuffle: These Are Seven Women Leaders Sworn Into The Council Of Ministers Today 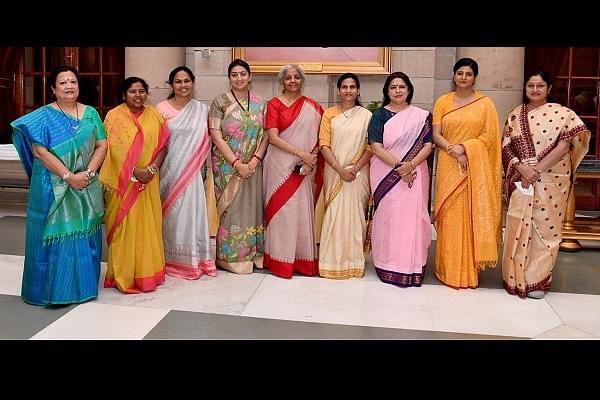 In the Cabinet reshuffle today, seven more women have found a place in Narendra Modi's Council of Ministers, taking the total number to eleven.

At the beginning of Modi's second term, there were six women ministers, but Harsimrat Kaur resigned after Akali Dal snapped ties with the BJP-led NDA.

Here are the seven new women members of the union council of ministers.

Shobha Karandlaje is a Lok Sabha MP (BJP) for Udupi, Chikmagalur in Karnataka, serving her second term as MP. The 54-year-old has served as Cabinet Minister in Government of Karnataka, holding a range of portfolios across Food and Civil Supplies, Power, Rural Development and Panchayati Raj System.

A known loyalist of CM Yediyurappa, she is known as a firebrand leader for being vocal on contemporary issues, including attacks on right-wing workers and Hindu communities in coastal Karnataka. She is also BJP’s state Vice-President in Karnataka.

Meenakshi Lekhi, a prominent Supreme Court lawyer and a social worker is a Lok Sabha MP (BJP) for New Delhi. Known for her oratory skills, she has served as spokesperson for BJP in the past. As an advocate, Lekhi has taken up women's issues especially domestic violence, family disputes and Permanent Commission for Women in the Armed Forces in the court. In 2019, Lekhi had filed a criminal case of contempt against Congress leader Rahul Gandhi over the Rafale deal.

Darshana Vikram Jardosh is a Lok Sabha MP for Surat in Gujarat, serving her third term as MP. She is Director of ‘Sanskruti’, an art and cultural organization. The 60-year-old has also been a Corporator of Surat Municipal Corporation and Member of the Gujarat Social Welfare Board in the past.

Annpurna Devi Yadav is a Lok Sabha MP for Kodarma in Jharkhand, serving her first term as MP. The 51-year-old has also been a four-time MLA from Jharkhand and Bihar. She has served as a member of council of ministers in both the states, and has an MA in History from Ranchi University.

Pratima Bhoumik is a Lok Sabha MP for Tripura West in Tripura, serving her first term as MP. The 52-year-old comes from a humble background, and practices farming. She holds a Graduate degree in Bio-Science from Women's College, Tripura University. She is known to be a close confidante of Tripura Chief Minister Biplab Deb.

She was the BJP's women cell chief of Tripura when the saffron party trounced left heavyweight Manik Sarkar in the tiny state in Northeast. She is seen as replacing Debasree Chaudhuri, the only Bengali woman in Modi cabinet. The fact that Tripura will go to polls in 2023 and that the BJP lost Bengal worked in Bhoumik's favour.

Bharati Pravin Pawar is a Lok Sabha MP for Dindori in Maharashtra, serving her first term as MP. She holds a MBBS degree in Surgery from NDMVPS Medical College, Nashik. She is the second daughter-in-law of eight-time MLA and ex-minister AT Pawar. She reportedly left Rashtrawadi Congress due to internal conflicts and became a prominent member of the BJP. She is the only woman from Maharashtra MP in Modi’s new Cabinet.

Anupriya Patel, the national president of Apna Dal (Sonelal), was also inducted into the new council of ministers. She is one of the seven women to take oath today. An MP from Uttar Pradesh’s Mirzapur, Patel’s party is in alliance with BJP. She had previously served as Minister of State for Health during the first term of the NDA government.

Apna Dal claims to enjoy the support of Kurmis as well as non-Yadav OBC groups such as Kushwaha, Maurya, Nishad, Pal and Saini in UP which is due for assembly elections next year.

While the Minister of State Debasree Chaudhuri representing West Bengal's Raiganj was dropped this time, others like Nirmala Sitharaman, Smriti Irani, Renuka Singh and Sadhvi Niranjan Jyoti retained their place.

Also read: All About 15 Union Cabinet Ministers Sworn In Today