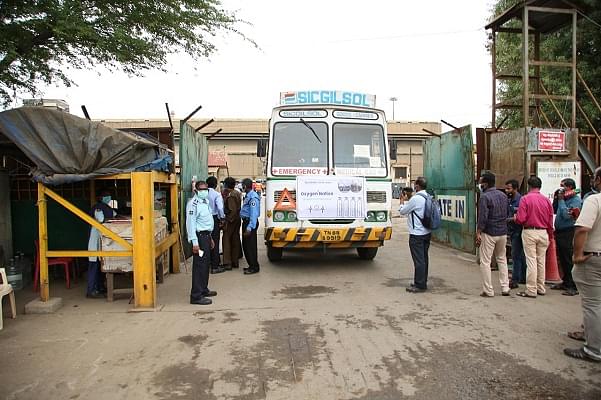 Vedanta’s Sterlite Copper has commenced generation of liquid oxygen from its Thoothukudi plant on Wednesday (12 May) with the first tanker carrying 4.8 tons of liquid oxygen.

Two more oxygen tankers will be dispatched on a daily basis and the production of oxygen at the plant will be scaled up in a gradual manner.

The oxygen supplied is of 98.6 per cent purity and has received the necessary medical-grade certifications. The company is now working to resolve the logistics involved in transporting the oxygen produced in their facility to the required locations, and are coordinating with the authorized nodal agencies in this regard.

“In view of the crisis, our focus was on commencing the production of liquid oxygen at the earliest which has been implemented immediately,” the company said in a statement.

“It gives us great satisfaction to be part of the united effort to stem the pandemic, and are especially grateful to the Hon’ble Supreme Court, State government, Central government and local administration for making every effort to provide the necessary approvals in an expedited manner,” the company added.

“My team members and I are honored that our facility and efforts are being directly put into helping save lives. We promise to make every possible effort to ensure that there is continuous production of oxygen from our plant to mitigate this crisis,” said Pankaj Kumar, CEO, Sterlite Copper.

In April, Tamil Nadu government gave permission for the reopening of Sterlite Copper plant in Thoothukudi for the production of oxygen for a period of four months.

This decision was a result of a meeting chaired by the then Tamil Nadu Chief Minister K Palaniswami, after Vedanta moved the Supreme Court to permit the opening of plant to manufacture oxygen.

The Tamil Nadu government had ordered the closure of copper smelter plant in 2018 following a violent protest that led to the death of 13 persons.

The 400,000 tonne Sterlite copper smelter plant operated in Thoothukudi for over 25 years with a cumulative investment of about Rs 3,000 crore.