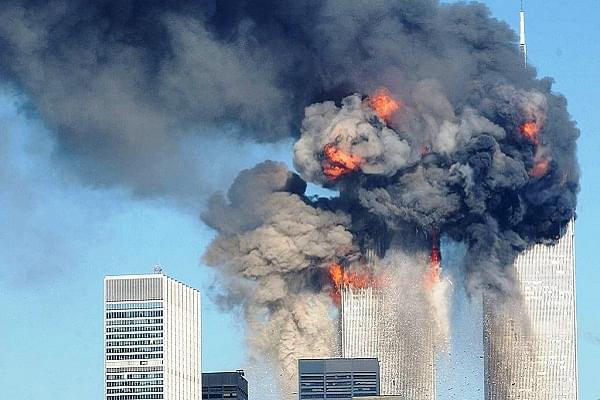 The World Trade Center buildings on fire after being hit by two planes on 11 September 2001, in New York. Photo: Spencer Platt/GettyImages.

A Federal Bureau of Investigation (FBI) official accidentally revealed the name of a Saudi diplomat who is suspected of aiding two Al-Qaeda terrorists who perpetrated the dastardly 9/11 terror attack, WION has reported.

This episode has raised renewed questions of Saudi Arabian government’s involvement in the terror attack.

The name of the diplomat, Mussaed Ahmed al-Jarrah was accidentally revealed in a declaration filed by Jill Sanborn who serves as FBI’s Counter-terrorism Assistant Director, during a lawsuit filed by the 9/11 victims’ families who have accused the Saudi government of involvement in the terror attack.

The 40 page declaration by Sanborn had blanked out the Saudi diplomat’s name in all instances but one which resulted in his name being revealed in the court.

As per Yahoo News journalist Michael Isikoff who first reported the story, both Attorney General William Barr and the Acting Director of the National Intelligence Richard Grennell had filed motions saying that, “any information relating to the Saudi embassy official and all internal FBI documents about this matter were so sensitive; they were state secrets, that means if revealed they could cause damage to the national security”.

The declaration which was unsealed last month was ultimately withdrawn by the court officials as it was “incorrectly” filed.

The families who filed the lawsuit have called it a major breakthrough and an apparent confirmation of a link between the Al Qaeda hijackers and the Saudi embassy in Washington.

The spokesperson for the families has alleged a complete cover-up on part of the United States government over Saudi role in 9/11.

“It demonstrates there was a hierarchy of command that’s coming from the Saudi Embassy to the Ministry of Islamic Affairs (in Los Angeles) to the hijackers”, the spokesperson Brett Eagleson was quoted as saying. Eagleson’s father had died in the 9/11 terror attacks.

The Saudi Arabian government has over the years repeatedly denied any role in the terror attack while calling itself a critical ally in US’ fight against terror.

The declaration referred to a partially declassified FBI report covering an investigation into possible links between Al-Qaeda terrorists and Saudi officials. The investigation had initially focused on a radical Imam at a Los Angeles mosque Fahad al-Thumairy and suspected Saudi agent Omar al-Bayoumi.

Bayoumi was believed to have lent money and found an apartment for two Al Qaeda terroris Khalid al-Mihdhar and Nawaf al-Hazmi in 2000. The two terrorists flew a plane into Pentagon on 9/11.

During the course of the investigation FBI agents also reportedly uncovered evidence that Bayoumi and Thumairy had been asked to aid the terrorists by a third individual now suspected to be the Saudi diplomat Mussaed Ahmed al-Jarrah.

Jarrah back then was a mid-level Foreign Ministry official who was tasked with supervising the activities of Islamic Affairs Ministry employees at Saudi-funded mosques and Islamic centres. He is recently believed to have served in Malaysia and Morocco.

As per a former FBI official, the bureau’s investigation had revealed that Jarrah, Thumairy and Bayoumi had discussed that assistance to the Al-Qaeda hijackers but ultimately failed to prove whether the trio knew their terrorist identities.