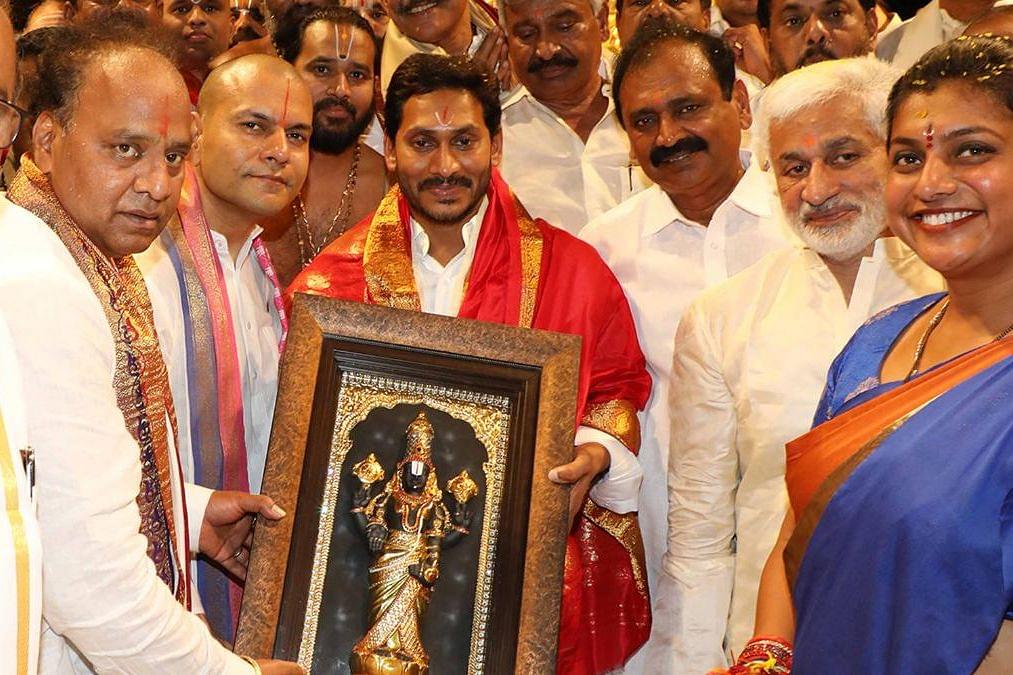 Reddy during his earlier visit to the temple.

It is a tradition for Andhra Pradesh chief ministers to visit the Tirumala temple during the Brahmotsavam festival for a special darshan and offer vastram (silk cloth) to the presiding deity on behalf of the state and its people.

This year, a controversy has erupted over the Chief Minister’s visit mainly since he happens to be a Christian. People of other faiths are allowed into the temple only after they sign a declaration affirming their faith in the presiding deity of the temple.

According to rules 136 and 137 of the TTD Board guidelines, non-Hindus wishing to have darshan at the shrine should declare their religion, on a form, and express their faith in the deity to the chief priest.

In 2014, the Union government issued a memo stating that anyone identified as a non-Hindu (based on name or surname) can be asked by the TTD authorities to make such a declaration.

The issue became controversial after Y V Subba Reddy, chairman of the Tirumala Tirupati Devasthanam Trust Board, which administers the temple, told the media last week that the Chief Minister need not sign any declaration to prove his faith in Lord Venkateswara.

He also said that devotees from various religions come to Tirumala to have darshan and it is logistically impossible to collect faith declarations from everyone.

There are reports that said that the TTD chairman has ruled out the need for non-Hindus to give such a declaration to enter the temple.

However, following a hue and cry being raised the TTD chairman clarified his statement: “Thousands of devotees come from all over the world every day to Tirumala with belief in Lord Balaji. Between 80,000 and one lakh people visit the temple during festivals and auspicious days. There will be many people from other religions in such pilgrims. What I said was that we cannot ask all such people for declaration.”

Former chief minister and opposition Telugu Desam Party (TDP) leader N Chandrababu Naidu said that allowing Reddy without such a declaration would be a “spiritual breach” that could bring a curse on the state and its people.

“The established traditions at the Tirumala temple should not be changed for the sake of a non-believer,” he said.

State Minister for Civil Supplies and Consumer Affairs Kodali Nani added more fuel, insisting that as the Chief Minister, Reddy had the right to visit any place of worship, irrespective of the faith he belongs to.

The minister said that the declaration norm should be revoked.

"When the late YS Rajashekhara Reddy (chief minister’s father) visited Tirupati as an MP and an MLA, Naidu did not seek any declaration. Jaganmohan Reddy visited the temple before and after the padayatra (before the 2019 assembly elections) and then too, Naidu did not ask for a declaration. What is the need for the Chief Minister to declare his faith and beliefs when he is coming to offer cotton clothes to Lord Venkateshwara?” Kodali wondered.

The Bhartiya Janata Party (BJP), too, has joined the chorus charging the Reddy government with intentionally hurting the sentiments of the Hindus.

It has lodged a complaint at the Machavaram Police Station in Vijayawada against Kodali, alleging he had abused Hindu gods.

If the Andhra Chief Minister enters the temple without making any declaration, it would be a repeat of what he did in November last year. Then, he bypassed the declaration formality and entered the temple.

Former prime minister Manmohan Singh, a Sikh, and Congress president Sonia Gandhi, too, have entered the temple without giving such a declaration, it is reported.

The TTD chairman is on record saying that Sonia Gandhi did not sign the declaration before entering the temple as also Y S Rajasekhara Reddy.

However, the late A P J Abdul Kalam signed the declaration voluntarily before he entered the temple when he was the president.

The controversy comes amidst allegation of the Reddy government being anti-Hindu with some mysterious incidents taking places in temples in coastal Andhra Pradesh.