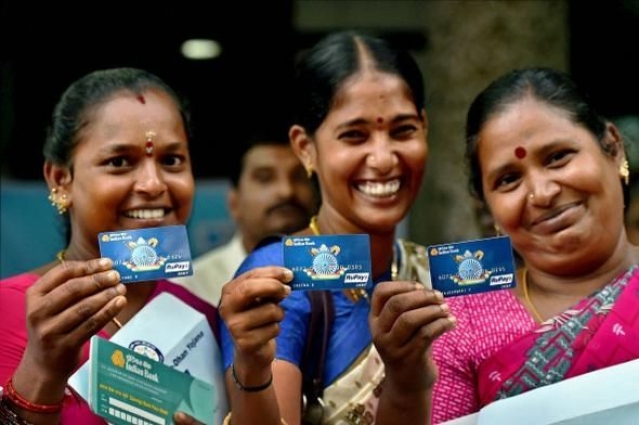 The system of sending money directly to beneficiaries through the Jan Dhan account, Aadhaar and mobile has saved more than Rs 1.70 lakh crore rupees from falling into the hands of middlemen. This was made possible by the Modi government's direct benefit transfer (DBT) facility implemented in 351 schemes of 51 ministries.

The 'JAM Trinity' of the Jan Dhan-Aadhaar-Mobile, made it easier to identify bogus beneficiaries and preventing leakages in government schemes.

In the last six years, Rs 12,95,468 crore have been disbursed to beneficiaries' accounts under the DBT plan. In 2020-21, Rs 2,10,244 crore were sent directly to the accounts as part of schemes such as MGNREGA,PDS, Pradhan Mantri Awas Yojana, among others.

In MGNREGA for instance, since job cards and accounts of the labourers were linked to Aadhaar, a large number of bogus beneficiaries were caught. Till December 2019, 5.55 lakh bogus labourers had been weeded out from the scheme. This ensured that Rs 24,162 crores was not misused. Otherwise, this money would have reached the accounts of bogus labourers. Similarly, due to the DBT scheme, 98.8 lakh bogus beneficiaries were caught in schemes under the Ministry of Women and Child Development. The deletion of fake beneficiaries prevented a possible scam to the tune of Rs 1,523.75 crore.

Making the linking of Aadhaar and mobile mandatory saved more than Rs 66,000 crore in government ration distribution from going into wrong hands. According to food and public distribution authorities, a total of Rs 66,896.87 crore was saved due to the removal of a total of 2.98 crore bogus beneficiaries from the system with the help of technology. According to data available on the website of the Direct Benefit Transfer Scheme, 51 ministries prevented a total of Rs 1,70,377.11 crore from going into the wrong hands till December 31, 2019.

An official who closely monitored the direct benefit transfer scheme in the central government told IANS, "The JAM Trinity (Jan Dhan-Aadhaar-mobile) has eliminated the web of middlemen. This is a successful example of preventing corruption through technology. Earlier in the absence of Aadhaar linkage, money had been swindled in the name of bogus labourers. Similarly, from PDS to fertilizers, the misuse of government funds in all the schemes connected with the petroleum ministry has been stopped."

What is DBT scheme?
Direct benefit transfer scheme transfers money directly to the account of the beneficiary in social assistance schemes such as LPG subsidy, MGNREGA , old age pension and scholarships. The Direct Benefit Transfer (DBT) scheme commenced from January 2013. But during his tenure, PM Modi has emphasised upon its implementation in mission mode. The Modi government implemented the DBT scheme in MGNREGA through the electronic payment framework. More than 38 crore Jan Dhan accounts, 100 crore Aadhaar, 100 crore mobiles have come in handy for direct transfers to beneficiaries on the ground.