A Month On, The Matter Of Bhim Army Chief’s Twitter Account Abusing Women Is All But Buried 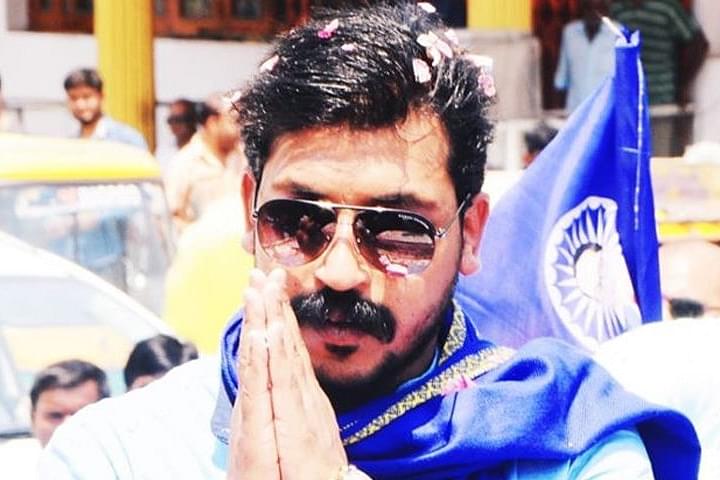 In these times when abuse of women on social media stirs massive controversies and gets prompt attention of the women commission and the police in many cases, can leader of a political outfit get away with publicly calling his ideological rivals "prostitutes who survive by giving BJP men blow job and warming their beds"?

Looks like he can, if he is Chandrashekhar ‘Azad’, chief of Bhim Army, a Dalit outfit.

Azad, a resident of Uttar Pradesh’s Saharanpur district, has been a controversial figure and is accused of inciting violence on more than one occasion. He has also been named in a chargesheet prepared by the Delhi Police regarding the communal riots that took place in the capital city in February.

It’s been more than a month since a series of highly abusive posts from Azad’s verified Twitter handle directed at women came in public attention.

The tweets, from the handle ‘@BhimArmyChief’, were made in 2018.

In one of the tweets posted as a reply to a Twitter user named Kajal Shingala, the handle wrote (translated from Hindi), “Kajal Brahmin, you are nationalistic, you have two sons, marry one of those sons to a Dalit and send another to join the Army, stop brokering for Bharatiya Janata Party, everyone knows whose bed you warm in the night.”

These are only a few of several such tweets made to Shingala, a political commentator who is popular on Twitter and Instagram for her views.

The ‘@BhimArmyChief’ handle replied in similar manner to several women that the user perceived as leaning towards the BJP. In a reply to one Jagrati Shukla, the handle wrote that she earned a living by giving BJP men blow jobs.

In a tweet accompanied by photographs of AajTak news anchor Anjana Om Kashyap, the handle said that journalists were indulging in prostitution.

All this was happening in run up to the 2019 Lok Sabha elections, where the BJP returned to power at Centre with a thumping majority.

Shingala told Swarajya that Azad’s handle was not verified at that time and posts from his handle were part of “a torrent of abuse” heaped on her account by “the Mewani-Hardik Patel-Bhim Army gang combined”.

“Supporters of these political leaders would say the filthiest things to me in comments. As I live in Gujarat, I was quite familiar with Mewani and Patel, but not so much with Chandrashekhar,” she says. “No amount of reporting of the abusive tweets helped. You bring down one, ten other handles would show up. At one point, I began to take this abuse in my stride. I had no option. The only option was to become silent.”

Shingala says the “gang” found out that she was born in a Brahmin family (Trivedi) and repeatedly used it as a slur against her. “I am not married to a man from the Brahmin caste, but they dug out my personal information and used it to abuse me. I had to drop even Shingala from my name after the abuse became too much to handle, and changed my account name to Kajal Hindustani,” she says.

Last month, some users spotted the old tweets by Azad and raised the matter on the social media. Shingala says she learnt about it when she was mass-tagged in those posts.

As the controversy picked up, she took to Twitter to appeal for action against Azad, and tagged the handles of Uttar Pradesh Police, UP Chief Minister Yogi Adityanath and chairperson of National Commission for Women (NCW) Rekha Sharma.

On 18 June, Rekha Sharma responded to similar appeals on Twitter and said that she would “take care of this man” who was “disgracing the name of great hero”, referring to Babasaheb Bhimrao Ambedkar.

I will take care of this man who is disgracing the name of the name of great hero. https://t.co/tiI92z6twt

The same day, Azad posted an explanation. Distancing himself from them, he said that the tweets were posted not by him but a worker of the party while he was in prison. He said that after his release, the worker handed him the Twitter account for personal use.

“I am a soldier of Babasaheb, and respect for sisters-daughters is paramount. The tweets are very wrong. I am making improvements in the account. Jai Bhim, Jai Bharat,” he wrote in Hindi.

The next day, the NCW chief wrote to UP DGP H C Awasthy that the commission had taken cognisance of Azad’s tweets “wherein it was seen that derogatory and defamatory statements have been made against women by him” and requested for action against the culprit.

No response from the UP police was reported in the media.

“Chandrashekhar Azad calls [himself] a Dalit leader and representative of the Dalit community. This abusive tweets, lies and violence misrepresented my entire community (sic),” she wrote.

Thiruvaipati said that she was writing in context of the abusive tweets by Azad’s account to Kajal. She wrote she fears that, as a Dalit activist herself who recently complained against Azad to AIIMS-Delhi, Azad might begin abusing her too on social media.

In May, Thiruvaipati wrote to AIIMS asking about details of a blood donation drive at the hospital where Azad, too, had donated blood. Azad, as per his statement to the court, suffers from a blood disorder called Polycythemia Vera. In reply, AIIMS wrote to Thiruvaipati on 12 June that probe has revealed that Azad and his doctor, Harjit Singh Bhatti, had hidden his condition from the hospital before donating blood and, after the staff learnt about it on social media, they discarded the sample.

“I am a resident of Hyderabad which is notorious stronghold of Bheem-Meem Army (AIMIM supports Raaven) I fear for my own safety, as well,” Thiruvaipati’s complaint to cyber police said.

Based on the complaint, the Hyderabad cyber police registered an FIR under Section 67a of the IT Act (publishing obscene material in electronic form) and Section 509 of the IPC (intending to insult the modesty of any woman) against Azad.

Attached is a copy of the FIR filed today pic.twitter.com/gFi8lyztAP

Nearly a month later, the issue is all but buried. Out of the public eye, the matter seems to have not moved an inch.

“Nothing has happened after that NCW notice and FIR. There has been no follow up. I wonder if all that had any meaning at all,” Shingala told Swarajya on 13 July.

Shingala says she is upset that the zeal shown by police in detaining the accused in the Agrima Joshua case has not been shown in hers.

Agrima Joshua is a stand-up comic who was recently trolled for a year-old video where she cracked some jokes on the upcoming statue of Chhatrapati Shivaji in Arabian Sea. After the video created a storm on the social media, a Shiv Sena MLA wrote to the state home minister demanding her arrest, and a Maharashtra Navnirmnan Sena worker vandalised her workplace, forcing her to give a written apology.

A ‘social media influencer’ with three lakh subscribers on YouTube, 26-year-old Shubham Mishra, then posted a highly abusive rant against Joshua, even threatening to rape her.

A resident of Vadodara in Gujarat, Mishra was detained on 12 July by Vadodara police, who took suo moto cognisance under Section 67 of IT Act (transmission of electronic material which is lascivious or tends to deprave or corrupt people).

Vadodara City Police took suo moto action in respect of an abusive, threatening video which was uploaded and shared on Social media by Shubham Mishra.

We have detained him and initiated legal process for registration of FIR against him under relevent section of IPC and IT act. pic.twitter.com/XM6J8y4nDx

The police have also filed an FIR against him under IPC sections 294 (obscenity), 354 (A), 504 (intentionally insults to break public peace) 505 (statements conducing to public mischief), 506 (criminal intimidation), 509 (intending to insult modesty of a woman).

Shingala says, “In my case too, the NCW intervened, but the UP police did not file an FIR. The Hyderabad police did, on complaint by Prerna, but nothing has been done so far. Why is Shubham Mishra in police net but Chandrashekhar, or whoever tweeted from his handle, is not?”