Assam Elections: How The BJP Scores Big By Listing Out Flood Control And Other Welfare Measures In Manifesto 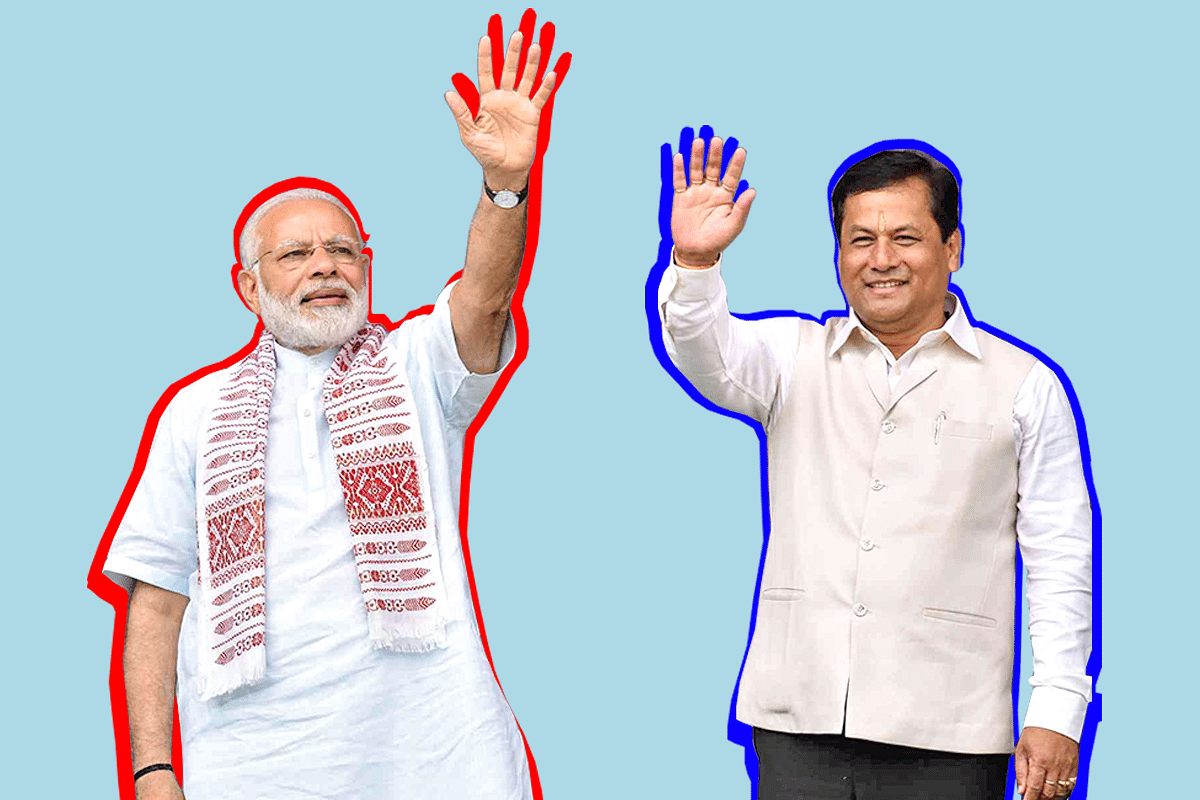 The high-voltage campaign for the assembly elections in Assam has witnessed a welcome first with Bharatiya Janata Party (BJP) detailing measures it will undertake to mitigate the perennial sufferings of millions in the state due to recurring floods.

Till now, the devastation caused by the Brahmaputra — also the lifeline of Assam — when it overflows its banks at least twice every year have never been an election issue.

This time, however, the BJP has pitchforked it into a prime issue with Prime Minister Narendra Modi, Home Minister Amit Shah and BJP national president J P Nadda, besides all other campaigners and state leaders, promising an end to Assam’s enormous sufferings caused by the floods.

Also, ‘Mission Brahmaputra’ — a list of concrete measures that the BJP will undertake to control floods — finds place in the top slot of the party’s 10-point Sankalp Patra.

“We shall, right after forming the next government once again in the state, use advanced satellite imagery and latest mapping technology to identify areas where huge reservoirs can be constructed. These reservoirs will hold the excess water of the Brahmaputra when it swells during the monsoons,” state Finance Minister Himanta Biswa Sarma told Swarajya.

The measures also include eviction of all squatters on the banks of the Brahmaputra and its tributaries and extensive land surveys of all chars (islands formed by alluvial deposits), including the new ones, to prevent further encroachments.

The entire stretch of the river from Sadiya (in Upper Assam) to Dhubri (from where the river enters Bangladesh) will be dredged extensively to increase its capacity, promises the manifesto.

BJP national vice-president and former Lok Sabha MP from Kendrapara in Odisha, Baijayant Panda, who is the prabhari (in-charge) of Assam, took the example of measures taken by his state in the past to control the floods of the Mahanadi.

“My constituency (Kendrapara) lies at the tail end of the river as it flows into the Bay of Bengal and, thus, used to bear the brunt of the floods every two or three years. The flood waters of the Mahanadi used to kill thousands of humans and animals every year. However, determined and scientific flood control measures taken over the years have eliminated the floods and the sufferings they used to cause,” Panda told Swarajya.

Panda also cited the example of Chhattisgarh which had eliminated floods in the upper reaches of the Mahanadi. “The earlier BJP government led by Raman Singh constructed a series of check-dams to hold excess water and also dredged the river extensively. Floods are a thing of the past in that state now,” said Panda.

Stating that the human ingenuity has shown that natural disasters can be controlled through a combination of measures, Panda said that there is no reason to hold the fatalistic view that Assam has to live with floods.

Nearly every year, and often as many as twice or even thrice a year, the Brahmaputra breaches its banks and inundates vast areas, thus destroying standing crops and habitations, causing deaths of hundreds of humans and animals and displacing people.

River experts say that due to heavy siltation, the carrying capacity of the river has decreased sharply and, hence, the river overflows in banks when it swells during the monsoons. Human interference in the form of settlements on the river banks and the chars also contribute to the floods.

“This is the first time that a political party has listed out concrete measures it proposes to address the grave issue of floods in Assam. In the past, political parties would just mention a line in their manifestos very perfunctorily that the problem of floods would be addressed,” said political analyst Dhirendranath Saikia.

Saikia said the BJP’s manifesto shows that the party has done its homework and is serious about addressing this issue which brings immense suffering to the people of the state every year.

Other Promises In The Manifesto

While addressing the issue of floods is the first point in the Sankalp Patra, the other nine are also important.

The manifesto addresses the emotive and important issue of protecting and promoting the indigenous culture and beliefs of the people of the state.

An extensive delimitation exercise to protect the political rights of the Assamese and other indigenous communities of the state is another important measure proposed in the manifesto.

Due to unnatural growth in the population of Bangladeshi-origin Muslims (mostly due to high birth rates among them), many constituencies in Assam have turned into Muslim-majority constituencies.

That has placed the Assamese and other indigenous communities at a severe disadvantage and robbed them of their political rights by making them minorities in their own homeland. A proper delimitation exercise can correct this.

The BJP has promised that all landless Indian citizens in the state will be given land pattas (possession certificates).

Providing ST status to Tai Ahom, Koch Rajbongshi, Chutia, tea tribes, Moran and Matak communities, setting up development councils for all tribes and the formulation of a comprehensive policy to deradicalise the hardline Muslims (of Bangladeshi origin) are the other highlights of the measures dedicated to ‘protection of civilisation in Assam’.

The India-Bangladesh border will be made infiltration-proof with modern technology and the menace of child and human trafficking as well as cattle smuggling will be addressed by setting up specific task forces and strengthening legislative measures.

Free scooties to college-going girls and motorcycles to boys, providing one lakh government jobs within a year and creating eight lakh employment opportunities every year, facilitating entrepreneurship through Swami Vivekananda Assam Youth Employment Yojana (SVAYEM), skill development, creating marquee incubators and co-working spaces all over the state and enabling start-ups, besides implementing a number of measures to make state capital Guwahati the sports hub of the country are other measures listed in the manifesto for the youth of the state.

“This manifesto is completely different from that of all other parties and is a vast improvement on our 2016 manifesto. We have taken the help of experts from various fields while drafting the manifesto and a lot of effort has gone in to list concrete measures that we will take for the all-round development of the state,” said Himanta Biswa Sarma.