Assam Staring At Upheaval After Passage Of Citizenship Bill 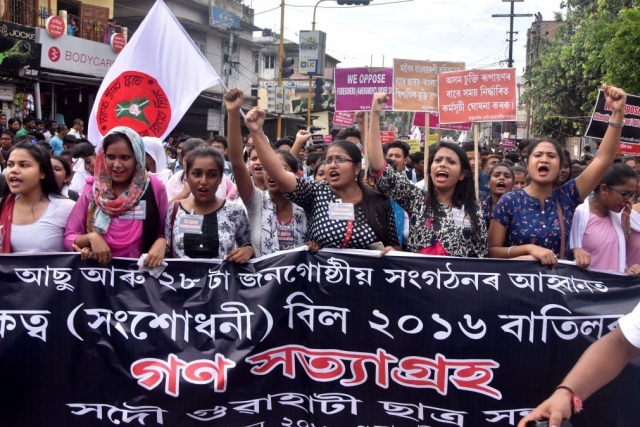 AASU activists along with 28 ethnic organisations take part in a procession to protest against the Citizenship (Amendment) Bill 2016. (Rajib Jyoti Sarma/Hindustan Times via GettyImages)

Assam is headed for stormy times after the expected passage of the Citizenship (Amendment) Bill, 2016 in the Lok Sabha early next week. The decks have been cleared for the bill to become a law with the Joint Parliamentary Committee (JPC), to which the bill was referred, approving its draft. The bill is likely to be tabled in the Lok Sabha on Monday.

The bill, which proposes to confer citizenship on Hindus, Sikhs, Buddhists, Jains, Parsis and Christians who have fled persecution in Bangladesh, Pakistan and Afghanistan, is being vehemently opposed by the Assamese and indigenous people of Assam. That’s because there are tens of lakhs of (Bengali) Hindus who have migrated to Assam illegally through the porous Indo-Bangla border since 1971 (the cut-off year for detection and deportation of illegal migrants under the Assam Accord) and the bill would make them Indian citizens, thus allowing them to stay on in Assam. The Assamese and other indigenous people, including tribal groups in the state, fear that if these Hindus are granted Indian citizenship, the indigenous people would become a minority in Assam.

The Asom Gana Parishad (AGP), an alliance partner of the ruling Bharatiya Janata Party (BJP) in the state, the influential All Assam Students Union (AASU), and a host of other organisations representing all the indigenous people of the state have been vociferously opposing the bill. For the BJP, however, the bill sends a strong message to its core constituency (read this). But in Assam, the bill has created division and discord between Assamese and Bengali Hindus, or a Barak-Brahmaputra divide. Bengali Hindus are concentrated in the state’s southern Barak valley while Assamese Hindus populate the Brahmaputra Valley. While Bengali Hindus welcome the bill, the Assamese Hindus oppose it. The bill has triggered anger against the BJP-led government in the state and given a handle to the militant ULFA, which has seen a steady stream of recruits in recent months.

The Union government tried to sweeten the bitter pill (the bill) by announcing the constitution of a high-power committee to look into the implementation of Clause 6 of the Assam Accord. This clause reads: “Constitutional, legislative and administrative safeguards, as may be appropriate, shall be provided to protect, preserve and promote the cultural, social, linguistic identity and heritage of the Assamese people”.

This committee, after consultations with stakeholders, will decide on “the quantum of reservation of seats in Assam Legislative Assembly and local bodies for Assamese people….assess the requirement of measures to be taken to protect Assamese and other indigenous languages of Assam, quantum of reservation in employment under Government of Assam and other measures to protect, preserve and promote cultural, social, linguistic identity and heritage of Assamese people”.

But the AASU and other bodies have termed the constitution of the committee, announced by Union Home Minister Rajnath Singh on Wednesday, as an eyewash. The Assamese are skeptical about such committees since similar committees set up earlier have not yielded any results. In 1998, the Union government set up a committee headed by then MHA joint secretary (North East) G K Pillai for implementation of this clause. The Assam government set up a committee to lay down the definition of ‘Assamese’ people in 2006 and five years later, a sub-committee was again constituted by the state government for implementation of Clause 6.

At the heart of the matter is the definition of ‘Assamese’ people and also the fact that the proposed Citizenship Bill is positioned against the Assam Accord. As for the definition of Assamese people, the AGP, AASU and other bodies representing the indigenous people of Assam assert that the 1951 National Register of Citizens (NRC) should form the basis of the definition. That is, all those whose names are included in the 1951 NRC and their direct descendants would be taken to be Assamese people and would enjoy benefits of reservations (in jobs and in the legislature) for Assamese.

The Assam Accord lays down 24 March 1971 as the cutoff date for determination of citizenship. That is, all those who were present in the state on that date (and their direct descendants) would be deemed to be citizens and the rest are to be detected and deported. The AGP and AASU hold that while all those people, and their descendants, whose names figure in the 1951 NRC would be deemed to be Assamese and thus be entitled to reservations and other protections, all those who came to the state between 1951 and 1971 would be deemed to be Indian citizens but would not be entitled to reservations and other benefits under Clause 6 of the Assam Accord.

Taking the 1951 NRC as the basis of definition of ‘Assamese people’ was proposed by former Assam assembly speaker Pranab Gogoi. Gogoi, a four-time Congress legislator, had come up with the definition of ‘Assamese’ in a six-page ruling that he had tabled in the state assembly in 2015 (during the tenure of the last Congress government in the state led by Tarun Gogoi). Gogoi had consulted 53 organisations representing indigenous people of the state before he submitted his ruling. The ruling, however, was not accepted by the Tarun Gogoi government, though it was backed by the BJP. AGP, AASU and many other organisations.

Many feel that the JPC which examined the bill could have made some amendments to it. One that would have satisfied the Assamese and indigenous people of Assam would have been to exempt the entire northeast India from the purview of the bill. Or, a clause could have been included stating that all Hindus who entered Assam from Bangladesh after 24 March 1971, would be resettled in other states and then granted Indian citizenship.

The Union government would have been well-advised to constitute the committee to implement Clause 6 of the Assam Accord many months ago so that its recommendations on the quantum of reservations for the Assamese and indigenous people of the state could have been processed and been ready for implementation by now. That would have acted as a concrete reassurance to the Assamese and indigenous people of Assam that their interests and identity is being protected.

Another step that ought to have been taken was to include six indigenous communities of the state - Ahoms, Morans, Mataks, Adivasis (tea tribes), Chutias and Koch-Rajbongshis in the list of Scheduled Tribe (ST) communities of the state. Though a committee has been set up to examine the demand of these communities to be included in the ST list and the state has been urging the Centre to move fast on this, there has been little progress on this front. Former assembly speaker Pranab Gogoi says that had these six communities been labelled Scheduled Tribes, the ST population in Assam would have gone up to 52 per cent.

With Assam then becoming a tribal-majority state, political power would thus have remained with the indigenous Assamese people of the state. There would, thus, have been no fear of Assam’s indigenous identity being diluted by migrants.

But now, with the National Democratic Alliance (NDA) government in Delhi planning to table and pass the bill in the Lok Sabha in order to send a strong signal to its core constituency, Assam is sure to be plunged into turmoil. A number of organisations representing the indigenous people of the state have lined up a series of protests. The planned movement against the bill in Assam can gain critical mass if New Delhi does not move fast and convince the Assamese that their interests will be protected and also if the state government does not handle the protests with tact.

Is The ULFA On A Comeback Trail?