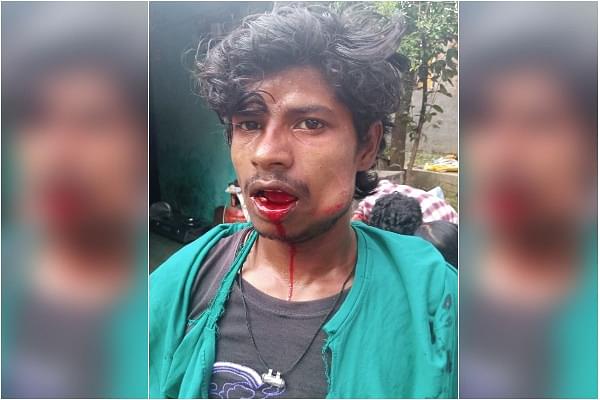 A family in Bihar’s Kishanganj district has accused members of the local Bhim Army unit of trying to desecrate a temple, objecting to their reverence for Hindu deities and saffron flag, and attacking them for their beliefs.

The accused too have filed a case against the family for assault. Both sides belong to a scheduled caste (SC).

Bhim Army is a Dalit outfit whose controversial chief Chandrashekhar Azad ‘Raavan’ launched his political party named ‘Azad Samaj Party’ in December. The same month, Azad was arrested by the Delhi police in connection with violence during anti-Citizenship (Amendment) Act protests in Daryaganj.

The outfit has been accused of violence on several occasions.

The latest violent scuffle in Bihar took place on 13 May.

Before we detail the allegations of the family on Bhim Army members, here is a look at the contents of the FIRs by both sides (the Bhim Army side and the temple side):

The Bhim Army side:

This FIR at Kishanganj police station (number 191/2020) was filed on the statement of 27-year-old Deepchand Ravidas, who has introduced himself as town president of ‘Bhim Army ekta mission’.

The statement says that around 3.30 pm on 13 May, a group of men attacked him with lathis, rods and a sword near a Shiva temple on Thakurbari road, when a cop (not named) was present in connection with an earlier complaint given by him.

The statement says the group attacked his sister too when she came to his rescue.

Of the eight men named, one Amit Tripathi alias ‘Chintu’ is from general caste while rest are dalits.

The accused include 55-year-old Gyani Ram and three of his four sons — Santosh Ram, Shyam Sundar Ram and Birendra Ram.

On the statement of 28-year-old Santosh Ram (named an accused in the above case), police filed an FIR against four men, including Deep Chand Ram, who is complainant in the first case.

Santosh’s statement says that around 4.30 pm on 13 May, a group of men entered the Shiva temple (that’s adjoining their house) and tried to desecrate it. The group entered the premises with iron rods, bricks and stones and demanded the temple be removed. They also tried to break the shivling.

Based on this statement, the police booked four named persons and other unidentified persons, under the same IPC sections as in the first FIR.

An additional charge, Section 295 (injuring or defiling place of worship), was also invoked.

Commenting on the case, investigating officer Arvind Kumar Yadav told this correspondent over the phone that two persons from each side have been arrested so far.

“You know how it is in such scuffles, both sides give complaints. The truth will come out only in probe. That is going on,” Yadav said and declined to speak more.

Birendra Ram is among the four members of his family named as accused by the Bhim Army side.

Two of his brothers, Santosh and Guddu, sustained major injuries. While Santosh was taken to jail after initial treatment, Guddu has his jaw broken (X-ray report attached below) and is recovering in a hospital.

He rejects the charges against him and says he and his family were the first to be attacked, but the other side managed to file the case earlier than them through their influence (the case is under investigation, as mentioned above).

He says the Bhim Army members often mock his and his family’s belief in Hindu gods.

“We are BJP voters. They don’t like this. They constantly tell us to join their outfit. They demand we stop worshipping Hindu deities and worship only Babasaheb [Bhimrao Ramji Ambedkar],” Birendra says.

“We tell them, we hold Babasaheb in deep reverence but he is our ‘kanooni bhagwan’ [legal god]. Our ‘sanskritic bhagwan’ [cultural gods] will always be Ram and Hanuman. They abuse us when we say this.”

Birendra says that on 10 May, the group entered the temple and told everyone to remove the saffron flag bearing an image of Bajrang Bali installed there.

He says that in the recent past, he would show support for the group in public thinking they are from same “samaaj” (community), but an incident made him wary of them.

“Once, during a discussion, they said that if I support them, I must break the shivling to show that I don’t support any false gods. I grew really angry and left the discussion. I said that if that was the condition, I would never support his group again,” he says.

He says the animosity that led to the recent violence began on Ambedkar’s birthday on 14 April, when the group celebrated it in a room adjoining the temple and with gathering of several Muslim men. “They had brought many Muslim men from outside. We suggested that they should shift the cerelebrations to the nearby community hall, but they in turn abused us and told us to replace the idols in the temple with that of Ambedkar,” Virendra says, and adds, “An ugly spat broke out.”

“All this has now culminated in violence. We have been thrashed for our religious beliefs,” he says.

About the recent police cases, Birendra says he feels particularly bad about the SC/ST Act slapped on Amit Tripathi.

“He was the one who took my injured brothers to the hospital. He had nothing to do with the scuffle,” says Birendra, and laments, “Why am I even blaming others for what has happened when my own has ditched me. The truth is that one of my maternal brothers is a key member of that organisation.”

This correspondent called up Sunil Ram, one of the accused named by Birendra‘s brother Santosh in his complaint several times but was unable to talk to him.

Each time, a woman answered the call and said that he was not available.