Dalit Heroism Against British Rule Is Well-Known, Yet The ‘Neo-Dalits’ Think Otherwise 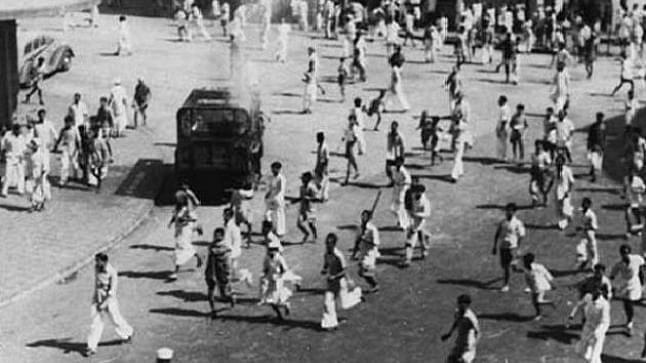 The pride of the British

You shattered to smithereens

- a Jawabi Kirtan in Bundelkhand

Ever since the recent clashes between Marathas and Mahars broke out at the Bhim-Koregaon, there is a lot of discussion about the Dalit memory and how Dalits view and celebrate their history. Even though the celebrations at the Bhim-Koregaon were never about celebrating the British imperialism, a bizarre twist is now being given to the belief that Dalits fought on the sides of the British because the foreign rulers ‘liberated’ them from the caste-order and ‘uplifted’ them by providing access to education and employment. It is, therefore, imperative to look at how the British conquest appears in the Dalit memory and what the Dalit folklores celebrate.

Unlike the present day, ‘neo-Dalit’ discourse increasingly infiltrated by the ultra-left, anarchists and Islamists, Dalit discourse has always remembered and celebrated their resistance to the British rule in India. We, therefore, visit some of the popular memories of the Dalit castes at the local levels of the Gangetic plains, which had turned into an inferno during the First War of Independence in 1857.

In the region, to this day, Dalits celebrate heroes like Chetram Jatav, Balluram Mehtar, Banke Chamar, Vira Pasi and others for their uncompromising struggle against the British. Chetram Jatav and Balluram Mehtar led the uprising in the district of Etahas as soon the news of the rebellion at Barrackpore reached the district. Similarly, Banke Chamar and his 18 associates became the local symbol of resistance in the Jaunpur district. Later, when the British succeeded in suppressing the uprising, Chetram and Balluram were tied to trees and shot dead while Banke Chamar was captured and hanged till death. Likewise, Vira Pasi is remembered for carrying forward the anti-British struggle after the arrest of Raja Beni Madhav Singh of Murar Mau in Rae Bareli who had sided with the uprising. Vira Pasi became a local legend after rescuing Raja Beni Madhav Singh from British captivity and escaping arrest despite carrying an award as high as Rs 50,000 on his head.

Not only memories of Dalit heroes are alive today, some of them have passed into myths and legends with shrines built for them. Like shrine for Shahid Baba in the Majhauwa village of Azamgarh district, or the shrine for Rajit Baba in the Shahapur village in the Arrah District of Bihar or the one for Raghu Chamar in the Janaidih village in Bihar, who was a soldier in the army of the Kunwar Singh. When Raghu died fighting, the legend says, that a guler tree grew on the exact spot of his death, a tree on which no flower blooms except a solitary one at the midnight on full moon nights - a flowerless tree, perhaps a metaphor for the oppressive British rule, which grew over the death of so many sons of the soil. These shrines continue to attract a large number of people as the folk religion, caste memories and local legends have mingled together to create a vibrant subaltern culture.

Similar semi-legendary story is that of the Gangu Baba in the villages of the Bithoor, UP. A man of extraordinary prowess, he joined the army of Nana Saheb Peshwa and wreaked havoc in the British ranks. He was captured and dragged to Kanpur, where he was hanged from a neem tree in Chunniganj. Today, a staute of Gangu Baba stands at the spot.

And who hasn’t heard of Udadevi and Makka Pasi, the warrior couple who died fighting in the defence of Awadh? Makka Pasi led an army of 200 Dalits at Chinhat near Lucknow and killed many British soldiers of the army led by Captain Henry Lawrence. Makka later fell in the battle, shot dead by Lawrence. On the other hand, his wife Udadevi was the commander of the women’s battalion of Awadh. It was at the Sikandar Bagh that General Colin Campbell came face to face with the mutineers including this women’s battalion consisting mainly of the women of Dalit and other subaltern castes. Sikandar Bagh was the scene of the great battle and great slaughter by the British. Even after the battle was lost, sharp shooter that Uda Devi was, she managed to kill more than two dozen British soldiers before being killed herself.

Then there is the famous Jhalkaribai Kori of Jhansi who was a soldier in the Durga Dal (women battalion) of Jhansi and a confidant of Rani Laxmibai. It was she who led the famous last charge of Jhansi against the British. Dressed as the Laxmibai, she drew the British army towards her, thus allowing the queen to escape to Kalpi. Jhalkaribai Kori remains to this date a powerful symbol of resistance and bravery in the local folklore and a focal point of the political and cultural assertion of the Dalits. Similarly, Mahabiri Devi of Muzaffarnagar is another woman hero of the 1857. She belonged to the Bhagi caste and is known for her efforts to organise Dalits to live a dignified life by rejecting the caste-ordained work. When the great rebellion broke out, she organised her own women’s battalion and attacked the British. She and all other women in the group were eventually killed.

In fact, far from the faux narrative, Dalit narrative remembers and celebrates the resistance against the British Empire. They remember how thousands of them fought against the British and thousands of them died for India. Be it at Magarwara at Unnao, or Bani on the banks of the river Sai or Dilkushabagh or SikandarBagh, the British conquest was fiercely resisted by the subalterns who paid for it in blood and fire. And this resistance continued even after the 1857. There are countless Dalits who are remembered as important leaders in the local Dalit memory in the nationalist struggle like Ram Chandra Bhangi in the anti-Rowlatt Act agitation, 1919 or Duli Dhobi, Mangal Mochi, Ramapati Chamar, Chhotu Pasi, Alghu Pasi and other hanged to death by the British in the Chauri Chaura incident of 1923.

Other instances are Baldev Prasad Kuril, Vindeshwari during the Civil Disobedience Movement and Hari and Shivdhan Chamar during the Quit India Movement of 1942 and many more like the famous Madari Pasi of the Eka movement of 1921centered in the districts of Hardoi, Bharaich and Sitapur. The movement was a peasant rebellion against the atrocious rents, oppression of the zamindars and British administration. It was the part of the several kisan movements sprouting in the region and led mainly by the subalterns from both Dalit and Shudra castes. The Eka movement stands out due to its intensity and not restricting itself to the non-violent means.

The memories of these Dalit heroes and movements are alive till date and continue to be propagated by the numerous Dalit-run publications. They serve as an anchor in history of the Dalit role in the story of India. They, especially the women, also serve as a source of inspiration in the modern day struggle against the caste oppression.They are an important aspect of not only the socio-cultural milieu but also in the political mobilisation of the Dalit communities. It was actually Kanshiram who actually pioneered the political use of these memories after failing to make any significant dent among the UP Dalits in the beginning due to his training in the Maharashtra style radical and often academic rhetorical politics in the Ambedkarite mould.

But, sadly, they never found mention in the ideologically tainted history writing of post-Independence India, where the mantra of ‘secularism and socialism’ became the defining template of the history writing under the patronage of the Congress to the neglect of the history of the people of India - one reason maybe that the much of the Dalit narrative stood in contrast to the Congress politics. For example, it is little known that the people arrested and sentenced to death in the Chauri Chaura incident were mostly Dalits. And it was on the pretext of this incident that Gandhi had recalled his Non-cooperation Movement. Dalits to this day see it as a great betrayal by the Gandhi and Congress who abandoned them.

Dalits believe that it was because Gandhi, a staunch supporter of the caste system, was actually frightened by the Dalit militancy in the Chauri Chaura incident, which even though then directed towards the British, could have easily turned against the feudal caste-order as well. Also, they remember how the Congress first supported and then sabotaged the peasant movements like Eka movement as they increasingly became militant against the zamindars and local power structures too. Congress claimed that it wanted to support a broad-class alliance which included zamindars and that these movements were often ‘violent’. But Dalits claim that zamindar class was the strongest pillar of the British rule and without attacking it all the radical claims of the Congress were not only hollow but also malevolent as it was more afraid of the subalterns and less concerned about eradicating the British rule.

In fact, the resistance faced by the British from the subalterns was so fierce and continuous that a large number of Dalit and Shudra castes and tribes were slammed under the infamous Criminal Tribes Act of 1871. It was designed specifically for the northern India. People of these castes could be arrested without warrant, their movements were highly restricted. Children of age 6-18 were snatched away from their parent and put in ‘reformatory’ schools. Whole communities were destroyed and mutilated to establish the British rule. Entire people were branded as ‘hereditary criminals’, driven away from their homes and villages, and their lands taken away and given to the zamindars and British loyalists.

A deluge had swept the north, which crushed the entire social fabric of the region beyond repair. Today, descendants of these castes and tribes constitute more than 60 millions of India’s population and remain at the bottom of the social order, vulnerable to every kind of social and administrative oppression imaginable. It is shameful that some people have started to present British rule as the emancipator of the Dalits by selectively picking up some unintended consequences of the colonial modernity. Such people do nothing but mock the resistance, the sacrifices and the suffering of the Dalits and subalterns under British rule; the two centuries of famine when tens of millions of people simply starved to death. Who were those people?