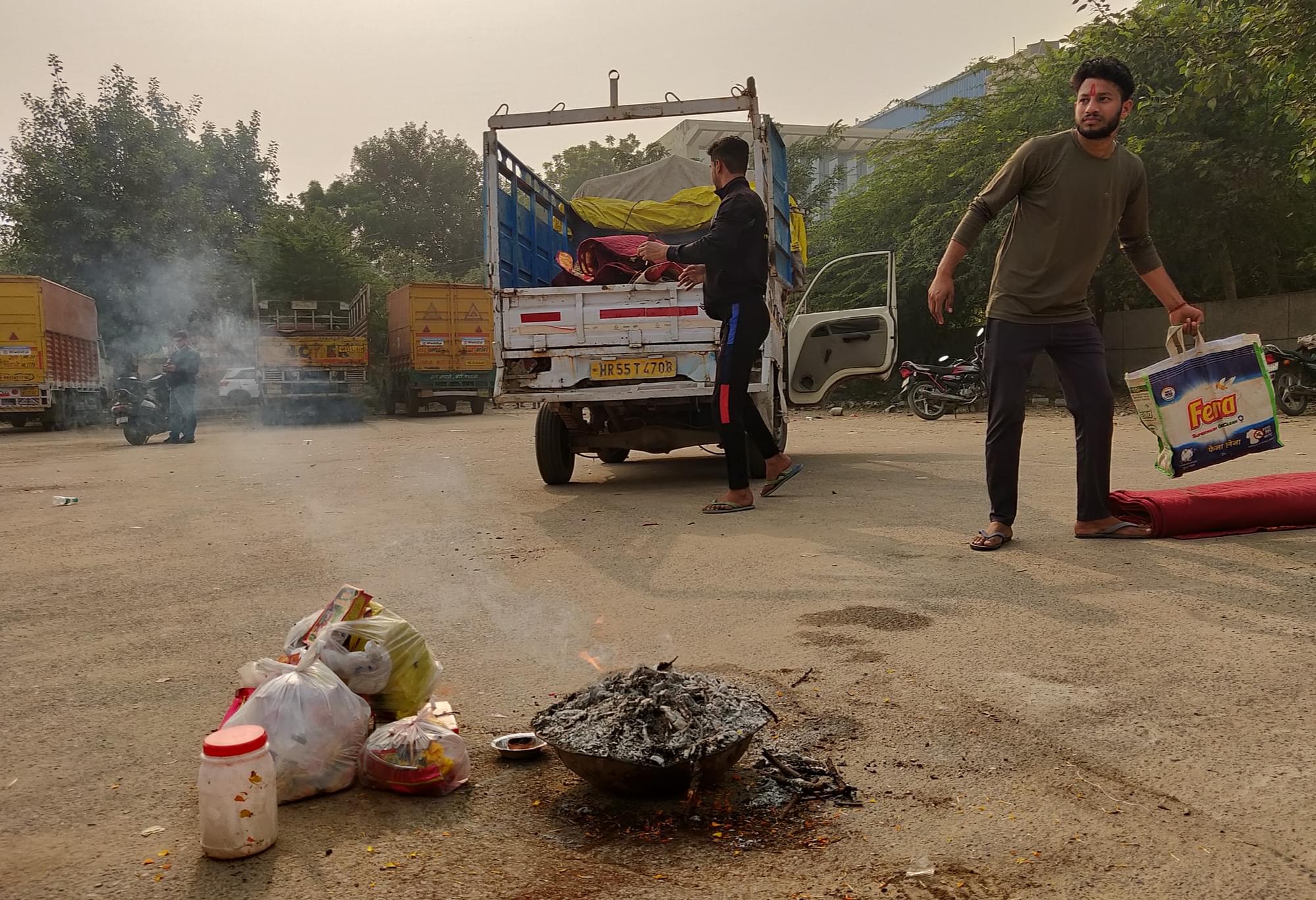 A group of men were rolling the carpets spread on the ground and loading them on a mini-truck. One of them dragged the still simmering havan kund to a corner.

“Madam, you are late,” one of them said.

This ground in Sector 37 of Gurugram district of Haryana was the site of a spat between Hindu and Muslim groups last week.

While Muslims wanted to use it to spread their carpets and read namaz in batches, Hindus wanted to play cricket.

The area falls under village Khandsa, which is entirely Hindu-populated.

The report quoted a resident, Sachin Yadav, as saying that when the villagers were playing cricket on the ground, “thousands” of namazis gathered with carpets and scared away the children. The police intervened, and told the namazis that they could read namaz at the site only after prior permission.

The report showed the namazis walking away, with residents telling them to read namaz inside mosques.

On Friday (26 November), Hindu residents organised a havan at the same spot.

They told me they were not interested in speaking to the media.

A few metres away, some men began raising slogans against news channel NDTV.

“All Muslims are sons-in-law of NDTV,” a man said. The crowd cheered.

A woman journalist who stood with a mike brandishing the logo of NDTV, walked away.

In Khandsa village of Gurugram where residents and Hindu activists did havan at an open land today (where namazis gather and where both sides entered into a scuffle last week), crowd raises chants against NDTV pic.twitter.com/VCxFAEk6vz

A few men turned to me.

One of them, who introduced himself as Sudhir, said, “We organised this havan in memory of the martyrs of Mumbai terror attacks which Pakistan orchestrated and the purpose of which was to label Hindus as terrorists.”

“We gave a letter to the Gurugram SP (superintendent of police) as well as to this [Sector 37] police station a few days ago.”

Asked if the real motive was to block the ground for namazis, a man accompanying Sudhir said, “We have said what we have to say. In any case, you will go and write lies.”

He whisked Sudhir away.

A man was seen screaming at three journalists.

“Where will the children of this village play? You tell us, where? People like you show the viewpoint of only those who fund you,” the man said angrily.

Others around him made gestures and noises in support.

Yesterday, saw a lot of hostility by Gurugram sector 37 residents towards the media. Including print, TV and certain websites. This is a peek into what happened. A resident angrily asked why last week's 'attack' on children playing cricket in the ground were not covered at all pic.twitter.com/kbszMOJOLB

The havan crowd began to disperse. Some sped off on motorcycles, others in cars.

“Don’t talk to the media, come with us,” a car occupant said, signalling to a man who had begun talking to me. He walked away.

A man approached me, introducing himself as Yogesh from Gurugram News. “I have been here since 11 am. I can tell you what all happened,” he said, kindly.

Yogesh said that Hindu and Muslims groups arrived almost simultaneously, one side with the havan paraphernalia and the other side with mats. There was a spat, but eventually the Muslims went away.

The ground is right outside Sector 37 police station.

“Shehzad Khan stayed here for some time. He also did namaz with a few men near the havan. He later told the media that Hindu groups may pretend that the havan marked the anniversary of the 2008 Mumbai terror attacks, but everyone knows the truth — it was to disrupt the namaz. He said it was a very shameful act,” said Yogesh.

“I have recorded the statement. Our channel will play it.”

Even as the crowd thinned, Dinesh Bharti, clad in a saffron kurta, stayed at the site. Bharti is president of a group called Bharat Vahini. A month ago, he was arrested by Gurugram police for supporting residents of Sector 47 in opposing Friday group namaz on a public ground.

(Watch the video of that protest and police taking away Bharti in the police van, here).

Bharti said he had been invited by the villagers to stand in support of them.

“We are against group namaz in the open anywhere in Gurugram. Let them go inside mosques, we have no problem with that,” he began, but asked to be excused as some men took him to a side saying it was something important.

Bharti did not return to continue his statement.

Before reaching Khandsa village, this correspondent spent some time at a site in Sector 10.

A piece of land amid shops, adjoining the main road, was covered with carpets and packed with namazis.

Clad in skull cap, face mask and white kurta pajama, a man who introduced himself as Khalid, said he had come from Mewat, which is 50 kilometres away.

Asked why he had travelled such a long distance, Khalid did not give a clear reply.

Met this gentleman in Gurgaon today who had come from 50-km away Mewat, especially for Friday group namaz in open pic.twitter.com/FvSjoJ4YdV

As he talked, others circled around us. One of them, Javed Khan, said he was a migrant to Gurugram and worked at a factory in Khandsa.

The namazis said there had been no protest at this site so far. A few policemen stood guard nearby.

Three men, who introduced themselves as Satish, Ravi and Rajesh, said they were guarding the pitchers.

“They [namazis] are barred from using these pitchers. These are for passers by only,” one of them said.

”It is because the namazis bring their lips to the pitcher and make it ‘jhootha’, unlike us who drink it from our palms,” he said as an explanation.

Asked if they objected to the namaz, the men said they did not.

By 1.30 pm, the ground was almost clear of all carpets. A few meters away, food thelas selling kebab and biryani were doing brisk business.

The controversy over namaz in Gurugram began in 2018. Residents of Wazirabad village under sector 53 opposed ‘encroachment’ of vacant public land when hundreds of Muslims allegedly began gathering at a spot on Fridays.

On one occasion, a group of half-a-dozen activists disrupted the prayers, demanding that namazis go to a mosque instead.

The police arrested the activists, who later got bail.

When Muslims gathered at the spot the next week amid police deployment, residents declared that they would begin organising havan at the spot from then on.

The Haryana government then put up a board that the property belonged to the government. The Friday prayers at the site then stopped.

Similar resident protests had begun in other parts of Gurugram as well.

After Wazirabad’s “success”, activists formed an outfit to stop all such Friday congregations on public land in Gurugram. They called themselves Samyukt Hindu Sangharsh Samiti.

The Friday prayer is one of the most important weekly ritual of Muslims around the world as it is believed that Quran has mentioned Friday as the ‘day of congregation’.

While women are prohibited from such congregations (a fatwa by Darul Uloom Deoband says “jamah is not for women” and “it is better for women to offer salah in their homes”), Muslim men gather in mosques or at their workplaces.

However, such congregations are often seen in public parks, roads and even on railway tracks.

Last week, president of a prominent gurudwara in Gurugram, Sherdil Singh Sandhu, declared in the media that namazis were welcome to use the gurudwara premises.

Sandhu said he was making the offer to “save the country”. Media, including global publications, hailed Sandhu’s offer and called it a "slap on the face of communal forces".

However, Sandhu retracted the offer when the D-day arrived, telling the media that “it is not possible in any way” and “we have clarified to Muslims that we cannot give them space“.

Sandhu’s U-turn came after opposition from Sikh groups and devotees, who argued that while anybody was free to enter the gurudwara irrespective of religion, caste and creed, gurudwara premises was meant for reading Gurbani only.

The Times of India reported that on 26 November, a Sikh Sangat from Delhi and Amritsar had reached the gurudwara to prevent namaz at the premises.