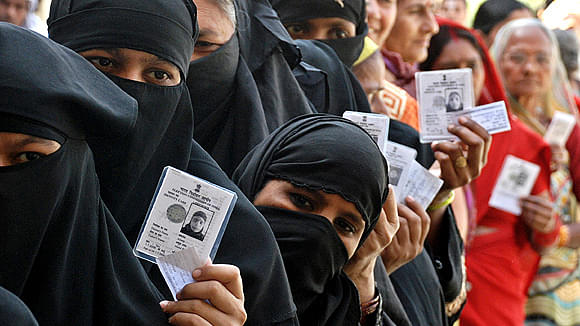 Muslim women outside a polling station in Ayodhya

Bharatiya Janata Party’s staggering victory in Uttar Pradesh (UP), the largest-ever majority by some accounts, has left people wondering if the saffron party has managed to attract the state’s Muslim voters with its call for sabka saath, sabka vikas.

On the one hand, the BJP’s victory in 31 of the 42 seats where Muslims form a third of the electorate has consolidated the view that a large section of the community has voted for the dominant party at the centre.

On the other hand, the absence of a landslide change in the vote shares of the Samajwadi Party (SP) and the Bahujan Samaj Party (BSP) has convinced some that the Muslims have actually voted for these parties.

Which of these claims is accurate?

The answer to this question lies hidden in election data. In the general election of 2014, consolidation of Hindu votes in favour of the BJP increased with a rise in the Muslim population. Consolidation was observed in constituencies where Muslims formed more than 20 to 30 per cent of the population.

A few observations can help us understand how this trend affected results in 2017.

First, of the 140 assembly constituencies where the Muslim population is 20 per cent or more, the BJP and its allies managed to win 111 seats. The SP, the BSP and the Congress could win only 23, two and three seats respectively. This is in line with what was observed in the 2014 general election and shows that constituencies with a large Muslim population see consolidation of Hindu votes in favour of the BJP.

Second, the BJP, the SP and the BSP attracted 39.4, 33.8 and 18.6 per cent votes in the 42 constituencies where Muslims form a third of the electorate.

With Hindu votes consolidating in favour of the BJP, it could be argued that the Muslim vote helped the SP and the BSP save face in these constituencies. The SP’s performance in areas with a higher Muslim population was better than in those where Muslims form a small minority. This indicates that Muslims voted for the SP in large numbers. As the BSP also managed to get a respectable share of votes in these constituencies, it seems the Muslim community did not vote en block for any party.

From these observations, it is feasible that the Muslims did not vote for the BJP. Also, the SP’s failure in these constituencies was guaranteed by a division of Muslim votes between the alliance and the BSP.

These conclusions hold ground in case of individual constituencies too. The BJP’s victory in Deoband, home to the Darul Uloom, has led to some believing that the Muslims voted for the saffron party. Statistics, however, do not support this claim.

Deoband’s 1.25 lakh-strong Muslim community constitutes 50 per cent of the total votes in the constituency. The assembly seat saw the consolidation of Hindu votes in favour of the BJP, as seen in other constitutions with a large Muslim population. Also, the SP and the BSP gained a respectable share of the total votes polled. Clearly, the disenchantment of the local population with Akhilesh Yadav following the 2013 Muzaffarnagar riots led to the division of Muslim votes between the SP and the BSP.

The BJP also managed to win in Meerapur constituency of Muzaffarnagar, the epicentre of the 2013 communal riots. The close fight here saw the BJP’s candidate win by a margin of just 193 votes. While the difference was negligible in this election, the SP had secured 33.6 per cent of the vote in 2012, compared to the BJP’s 15.22 per cent. Again, it was the consolidation of Hindu votes in favour of the BJP that worked for the party.

Other constituencies in the Muslim-dominated pockets of Shamli, Bareilly and Bijnor have also seen a similar equation emerging.