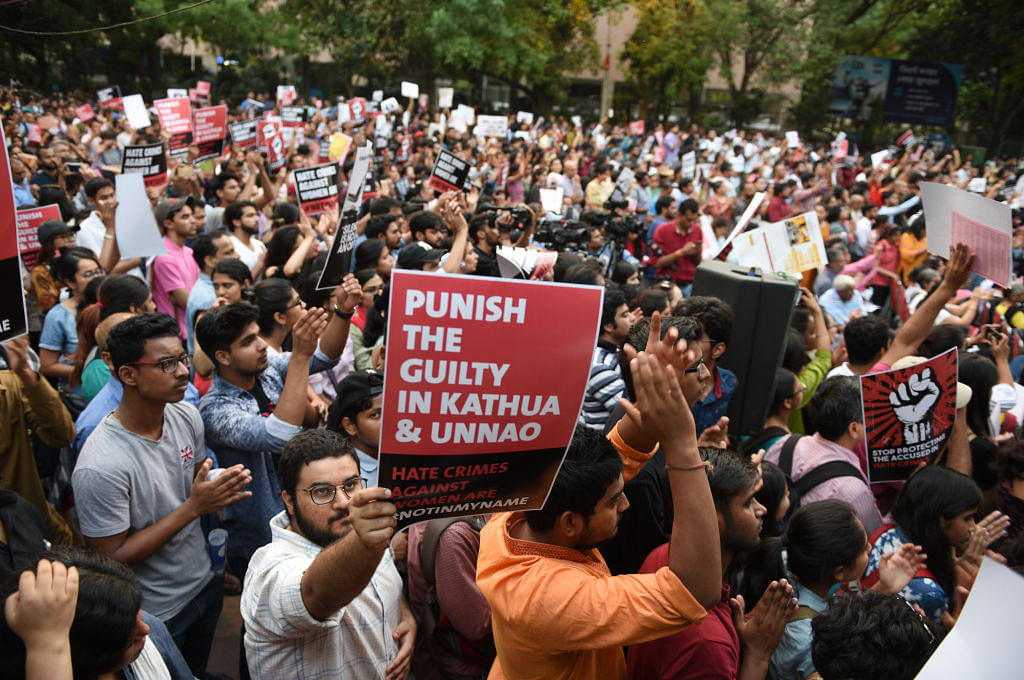 The usual suspects are at it again – a motley group of 49 civil servants (down from 65) has again written to the Prime Minister as it feels that the climate of majoritarian belligerence is responsible for incidents of rapes in Kathua and Unnao (hold your breath… no other case is even mentioned). For effect, it is said that they are demanding what they are demanding because Bharatiya Janata Party (BJP) governments are in power in these two states.

Besides the irony of raising the bogey of majoritarianism in Jammu and Kashmir (J&K), which is the only state in which minority Hindus were ethnically cleansed – a fact to which one of the signatories, is an eyewitness; what boggles the mind is the selective cherry-picking of incidents of heinous rapes. The heinous and barbaric crime of rape is a blot on the face of any society, but these sick worthies have now proceeded to divide rapes into good rapes and bad rapes. So a rape that suits their agenda is made to hog the limelight using the good offices of known leftist delinquents in their midst – the beneficiaries of an ecosystem in which their deracinated worldview flourished and prospered.

Majoritarian belligerence? Really? Aditi Mehta, one of the signatories was the Collector of Ajmer when the infamous Dargah serial rape scandal – India’s own Rotherham like grooming scandal – took place. The perpetrators were Muslims, the victims were mostly Hindus. I do not ever recall her saying that this was a minoritarian crime. That the scandal had to be broken through a news report in the third year of her tenure may lead to assumptions that I would leave the readers to figure out. I also do not recall that either she in a later posting as Ajmer Divisional Commissioner, or another signatory Umrao Salodia as Ajmer Divisional Commissioner even alluded to in passing. Salodia is a particularly interesting case. He was passed over for Chief Secretary because his senior batchmate got an extension, so he announced a change of religion to become Umrao Khan. That he is still signing his name as Salodia should make him disentitled to join this motley group for the crime of ghar wapsi.

These two instances of rank hypocrisy came readily to mind as they are from my own cadre – Rajasthan. The worst part is the crime of distinction that these worthies have committed – distinction of a crime into majoritarian or minoritarian. The inhuman crime of rape will now be condemned per the religion of the victim, or more likely, per the religion of the perpetrator. So if the accused is a Hindu, then it is bad rape, and it should be flagged. If the accused is a Hindu and the state is ruled by BJP, then it is worse rape. If the accused is a Hindu, state is BJP ruled and victim is a Muslim, then it is worst of the worst rapes. However, wherever the perpetrator is a Muslim, it is not a rape, or should we term it as a good rape? If the state is not ruled by BJP, then it is no rape and it is liable to be ignored. So you have a situation where the offence of rape is viewed from tinted glasses of ideology. Only three examples should suffice:

To say that I am ashamed of having these worthies as my senior colleagues would be an understatement. I am nauseated.

I also noticed two other little points. They also blame leaders of other political parties. That probably is a virtue-signaling plot. How dare our favoured political parties make a deviant course-correction? We should remember that social activist Harsh Mander lament in Indian Express – ‘Sonia, sadly’, where a small course correction by Congress party was dubbed by this author of that noxious piece of legislation – Targeted Communal Violence Bill – as abandonment of Muslims. We should also remember the chicanery that arrogant colonial slaves (who considers knowledge of English as the ultimate in intellectual accomplishment) like Jawahar Sircar lend to this sorry piece of prose. It is anybody’s guess as to who the author of this diatribe would be. It would definitely be one of those Leftist malcontents, who have made 'Breaking India' plots as their habit and who are well known for their intellectual bankruptcy. Even a lower division clerk would not make such silly mistakes of omission. Example:

‘And even then, while you have condemned the act and expressed a sense of shame, you have not condemned the communal pathology behind the act nor shown the resolve to change the social, political and administrative conditions under which such communal hate is bred. We have had enough.’ (Italics mine).

Communal pathology? Really? Clearly, their Queen’s English has worn out. Is merely demanding a Central Bureau of Investigation (CBI) enquiry a communal pathology? Do you know the fate of the CBI investigated Shopian rape case of last year in which the female doctor used her own vaginal swabs to frame the accused? Communal pathology requires the virus of a doctrine. This doctrine can be found without any effort in the Sharia, and in the Christian theology. Want to see pathology, just revisit Kashmir of 1989-90 – not that situation is much better today. Communal pathology is ruling the Kashmir Valley in the form of Jamat-e-Islami Kashmir, Al Qaeda and Islamic State (IS). Communal pathology makes IS, not a people who would accept a partition on a communal doctrine without insisting on exchange of population even as the Kashmiri Muslims refuse to integrate on the basis of their religious identity.

Christian and Islamic theology condemns non-believers to hell for merely existing, and you compare it with the doctrine of ‘Ishwar resides equally in all beings’ – all beings mind you, not just human beings. This is not like the doctrines of your favourite minorities, who do not even consider beings other than human beings of even having a soul. Communal pathology is when people of your ilk cannot tolerate Yogi Adityanath as the Chief Minister of Uttar Pradesh even though a trained maulana remained Union Education Minister for 11 years without anyone batting an eyelid. The pathology resides in this sick duplicity, dissimulation and dissembling.

For good measure, our worthies have thrown in a warning for their serving colleagues as well. The warning goes:

‘Our sense of shame is all the more acute because our younger colleagues who are still in service, especially those working in the districts and are required by law to care for and protect the weak and the vulnerable, also seem to have failed in their duty.’ (Italics mine).

This is nothing but a veiled warning to those working in the districts that can be easily understood by those well schooled in bureaucratese. It simply means – ‘better carry out our agenda or we will see you when we are in power’.

I am sorry, but my sense of shame is indeed very acute that all of you have lost all sense of proportion and you see crimes also from the prism of your ideological stance. There is no difference between you and the totalitarian communist regimes that do not brook any dissent or deviation from their dogmas. For the moment, I demand that all of you do the following:

Do please note that what you have written is a deliberate and malicious attempt to cause schism in the Indian society. As ex-civil servants, you would know what such acts entail.