If The Ram Mandir Comes, No One Can Grudge BJP Its Share Of Credit 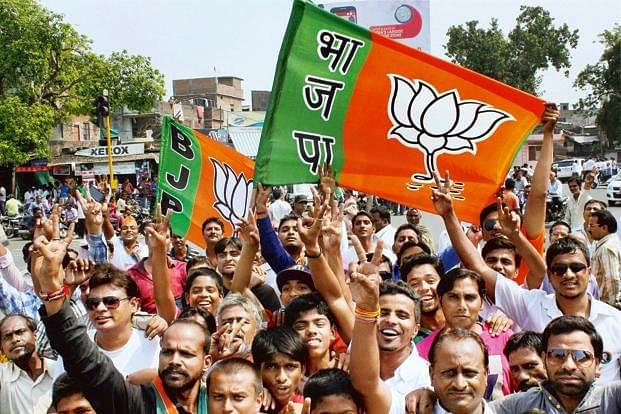 BJP supporters at a rally. (GettyImages)

A political commentator and journalist had recently written a piece on how the Bharatiya Janata Party (BJP) will take credit for a judgement that is in favour of Hindus in the Ram Janmabhoomi case, and whip up communal tension if otherwise.

While the author points out that a favourable verdict would give BJP the opportunity to “claim” credit, it is indeed the BJP that has shown the gall and gumption to commit itself to the cause in its manifesto.

Unlike other parties that have been noncommittal on the issue, played ‘safe’, and refrained from being politically honest to their constituency of voters, BJP has not minced its words on the issue.

The party has never denied the issue, or shifted its stance, or dissociated or distanced itself from the movement, or even attempted to couch its agenda. It is this political honesty that gives the BJP the ‘right’ to own and celebrate a probable favourable outcome.

And it would be specious to say that BJP will reap the benefits of a favourable outcome, without mentioning the cost it has paid for committing itself to the issue.

In 1990, in response to the clarion call given by L K Advani for a Ram Mandir at the Janmabhoomi, security personnel opened fire at kar sevaks who had gathered at Ayodhya. Fire was opened indiscriminately twice in a matter of 72 hours at unarmed citizens who could have otherwise been detained, if they posed a security threat at all.

The number of lives lost during the incident remains unknown, as several dead were cremated or buried discreetly.

In 1992, when the Babri Masjid was demolished, not only did Hindus face retaliatory violence in Pakistan and Bangladesh, but BJP state governments were dismissed in four states — Uttar Pradesh, Madhya Pradesh, Himachal Pradesh and Rajasthan.

Subsequently, the liberal cabal in India attacked the BJP with all possible ammunition, just to show the party in poor light and dilute the significance of the Ram Janmabhoomi.

Unfortunately, in their bid to settle political scores, these forces made abrasive commentary on the entire Hindu religion, questioned the veracity of its scriptures, and even deconstructed the very ‘maryaada’ that Ram personifies for millions of believers.

Hinduism has been addressed as ‘Militant Hinduism’, Ram Mandir is often dismissed as just an ‘emotive issue’, and Hindus asking for the temple are swiftly classified as ‘bad Hindus’.

As top leaders of the BJP including L K Advani, Uma Bharti and Kalyan Singh continue to face trial, it is notable that the party leadership, cadre and supporters are unwavering in their support for the cause.

Even when defeat was unavoidable in 2009 or victory was imminent in 2014, the BJP did not ditch the Ram Janmabhoomi issue.

It is once again superficial commentary that discounts the BJP’s record of adherence to constitutional means to pursue its agenda.

It is obvious that, like the Congress, which brought an ordinance to balance its scales of vote bank politics, the BJP too could have resorted to the ordinance route to resolve the Ram Janmabhoomi issue.

However, it is the pursuit sans coercion that gives the party the right to question the hypocrisy and duplicity of the Opposition.

The precision and firmness with which the situation has been handled in Kashmir post- abrogation of Article 370, despite international pressures from motivated forces, explains why the party is arguably the only outfit that has been able to align its politics with its ideology.

Be it abrogation of Article 370, delimitation of the State of Jammu and Kashmir, implementation of the National Register of Citizens (NRC), introduction of Citizenship Amendment Bill or Uniform Civil Code, the Constitutional Lakshman rekha has never been overstepped.

Ergo, if it is the BJP that has invested in the Ram Janmabhoomi, paid political demurrage, received virulent disapprobation from selectively secular intellectuals, it is acceptable if the party were to claim credit for a successful resolution of the Ram Mandir issue.

Like every dispute, this one too has more than possible outcomes i.e. one, ruling in favour of the Hindu side or two, that is seen as undesirable by the Hindu side.

As the final hearing for the 470-plus year-old dispute ended on 16 October 2019, the curtains were drawn in a rather dramatic way. It was a sight when Rajeev Dhawan shredded the papers handed to him from the Hindu side in the courtroom.

Moreover, the Sunni Waqf Board tried to offer a symbolic truce on the last day of the hearing, almost as if the defendants tried not to end up on the losing side.

Regardless of the direction in which the verdict is steered, concerted efforts are being made to ensure that the BJP is made to look like a demon which resorted to force, compulsion and intimidation.

The BJP would do well to ensure that its own sacrifices are not forgotten or besmirched.