In Alwar, A Meo Muslim Family Is Accused Of Molesting A Minor Hindu Girl And Killing Her Father. The Media Looks Away; The MLA Turns A Blind Eye 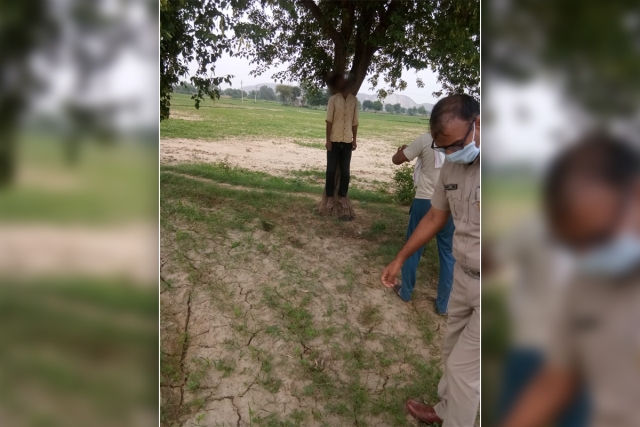 The body of Shravan that was found hanging from a tree on 24 June.

Merely ten days before her elder sister’s wedding, a minor girl jumps into a well in order to kill herself. Some neighbouring men have been molesting her for a year. Villagers manage to rescue her from the well, and take the matter to the police.

Instead of acting against the molesters, a cop, belonging to the same religion as them, shames the girl in front of her family. He calls the girl “loose”. The police drag the matter for two days before eventually filing a case under pressure.

On the morning of the day when the girl is scheduled to give her statement to the magistrate, her father is found hanging from a tree near the house.

This is a real incident, not a movie script. It happened three weeks ago, not in a remote corner where tragedies go unnoticed because of “tyranny of distance”, but merely hundred kilometres from the capital city.

In fact, the area where it happened – Ramgarh tehsil of Rajasthan’s Alwar district – is all too familiar to the Delhi-based national media.

Two years ago, a Muslim man was caught in the same Ramgarh tehsil by villagers when he was dragging two cows through a field in the dead of the night. He was thrashed and handed to the police. Rakbar Khan, who was a chargesheeted cattle thief, died in the police station. The police pinned the blame of his “murder” on villagers.

The Delhi media camped in the area for days, citing the case to paint Alwar as a hub for lynchings of Muslims by Hindus. The case spawned several Muslim agitations.

The case of the poor father, however, has not even made it to inside pages of prominent Delhi publications. The reason is all too familiar – the victim in this case was a Hindu while his daughter’s molesters are Muslims.

Forget the media, not even the local MLA Shafia Khan has bothered to contact the aggrieved family.

Shafia, from the Congress Party, is wife of Zubair Khan, a three-time MLA from the Ramgarh Assembly constituency, which comprises around 38 per cent Muslims. The last MLA from the seat was Bharatiya Janata Party’s Gyan Dev Ahuja, who was not given a ticket in the 2019 elections owing to his rising unpopularity among Hindu voters.

The residential colony where the 46-year-old man was found hanging, called Balot Nagar, has around 80 per cent Muslim population. It is less than two kilometres from village Lalawandi where Rakbar Khan was caught.

This correspondent spoke in detail to Pankaj Kumar Shravan, elder son of the deceased man, over the phone.

On the afternoon of 18 June, Pankaj’s 16-year-old sister jumped into a well. Thankfully, she was rescued. She told the family that she did not want to live anymore as she had become a reason for their stress and loss of reputation.

The same day, the family gave a written complaint to the Ramgarh Police Station (a copy of which is with Swarajya).

The complaint said that after her rescue, the girl revealed that a neighbouring man, Mohammad Anis from Meo community, has been harassing her physically and mentally for a year. He follows her when she goes to school, and also molests her at times. He has told her that she must talk to him over the phone regularly else he would malign her image in the village. He constantly asks her to get physical with him.

Fed up of such a life, the girl had decided to end her life, the complaint said.

The local police did not register a first information report (FIR) as mandated. Instead, they arrested Anis under Section 151 of the Code of Criminal Procedure (arrest to prevent the commission of cognisable offences).

Pankaj, 27, told this correspondent that a cop named Kamaaldin at Ramgarh thana insulted his sister, calling her “loose”.

“Kamaaldin said it was my sister who needed to be controlled. He said flat on my face – why have you come to me? Your family is dirty. You sister is loose,” says Pankaj, and adds, “if he were not in police uniform, I would have raised my hand on him.”

It is pertinent to mention here that Kamaaldin is one of the four cops whose role has come under the scanner of higher officers. On 30 June, the four cops were sent to district lines. Hindu organisations however deem the action as unsatisfactory and continue to demand their suspension.

Over the next two days, some Hindu organisations and local BJP workers joined the family in staging an agitation outside the Ramgarh thana.

In his statement, Pankaj had also said that when he confronted Anis, he, along with his brothers Anjum and Mehoob and one Taufiq, attacked him with weapons.

The police told Pankaj to take the girl to the Alwar district court on 24 June to record her statement in front of judicial magistrate. Her medical examination was also scheduled that day in Alwar district hospital.

Amid this, the Shravan family was preparing for the wedding of their eldest daughter on 29 June.

Pankaj has four siblings – one younger brother and three sisters. He is a murtikar, and works at a marble workshop in Ramgarh.

On the morning of 24 June, he saw his father Shravan hanging from a tree, some 500 metres from the house.

On the statement of Pankaj’s younger brother Anil, the Ramgarh police registered another FIR (number 236/2020) against Anis’s father Sumaruddin, his brothers Mehboob and Anjum, and Taufiq. They were booked for murder.

The statement recorded in the FIR says that Anis’s family had been putting a lot of pressure on his family for “compromise” in the molestation case.

It further says that the four men strangled his father to death and hanged him from a tree when he was in a field for his morning ritual. It also says that the accused have a criminal history and gone to jail in the past, and enjoy local political patronage.

Pankaj told this correspondent, “my father works on a field as a labourer some 500 metres from our house. He leaves for the field at dawn for his morning ablutions and field work. My niece told me that around 4.30 am, she heard voices of some men saying ‘aa raha hai, aa raha hai’ (he is coming, he is coming), but did not make much of it and continued to sleep.”

“We are not only suspecting but are sure that my father has been murdered and hung from a tree by Anis’s brothers. They had been after us to take the case back, which I had simply refused to do.”

Pankaj narrates a background to the entire episode. He says that the girl first told them about harassment by Anis and his brothers about a year ago.

Pankaj confronted their father Samaruddin at that time, who expressed helplessness at his sons’ conduct and told the Shravan family they were free to beat up his sons and even break their bones.

“I said I don’t want to go jail on charges of assaulting your sons. It’s your duty to bring them on track. Samaruddin said he cannot do much,” says Pankaj.

About six months ago, the family found that the girl had consumed several sleeping pills. She survived, but told the family that it was Anis who had given her the tablets.

“She told us that Anis wanted her to give the medicines to all of us so we could fall asleep and she could elope with him,” says Pankaj. “She said she did not want to do so and to get out of the whole thing, she consumed the tablets herself.”

Pankaj says that once again, he confronted Samaruddin who continued to toe the same line.

“He told me yet again to deal with his sons myself. Ma’am, we are the only Brahmin family in the colony. How can we dare to take on them alone? They are criminals. And the law is such that the moment we touch them, the police would book us for mob lynching,” he says.

A similar spat between the families broke out in mid-June. It was out of this stress that the girl, says Pankaj, tried to commit suicide by jumping into the well.

After his father’s body was found, several Hindu activists and BJP workers agitated outside the Ramgarh thana, said Gaurav Soni, a BJP Yuva Morcha leader from Ramgarh. A slew of political leaders from the BJP also visited the family in the coming days, including Alwar MP Mahant Balaknath and Gyan Dev Ahuja, he informed.

The leaders pooled in some money and gave it to Pankaj’s family.

“At least they gave something. Our MLA has not even bothered to give me a call, let alone visit me. She openly sides with her co-religionists,” he says.

A local BJP volunteer, however, is open in his criticism of the visiting BJP leaders. “They came in a Mercedes. Is this is all the amount that they could offer to the poor family? It makes us feel utterly lonely and helpless.”

He also informed that the case is now being handled by higher officers in Alwar police, and charges of gangrape have been added in the FIR filed for molestation after the girl’s Section 164 statement.

This correspondent called up the SP of Alwar and left text messages, but he has not responded yet.

Amid all this, the family was able to marry off the elder sister as planned. “That event brought some smiles in the family. Otherwise, our life has turned upside down,” says Pankaj.

More than the loss, it is the shame that is killing them, he says. The shame of being helpless and weak.

“Ramgarh is no place for Hindus anymore, especially if you are not living amid your own people,” he says, and adds that the family has been wanting to sell the house and shift to a “Hindu area” for years, but not getting a suitable buyer.

“No Hindu wants to buy the house anymore and Muslims offer peanuts. We have not been able to strike a deal in many years,” he says.

Pankaj says they bought the plot 10 years ago for about Rs 4 lakh and spent another Rs 10 lakh on construction. He estimates the price today to be “at least Rs 18-20 lakh”.

The last he was offered was Rs 5 lakh. “He was a Meo. They very well understand our helplessness. We know the house won’t sell for more, but we have been dragging our feet on the matter, hoping against hope that we would get a fair deal,” he says. “This is all the asset that we have.”

The family’s troubles have only mounted with this case. Pankaj says that the neighbouring Meos have been giving them feelers that the Samaruddin family has vowed “revenge” once they are out on bail.

“It is a very real possibility,” says Pankaj.

His younger sister, meanwhile, continues to be depressed and quiet, as she holds herself responsible for the entire thing, he says. “We have to keep a watch on her too. We fear she might harm herself again.”