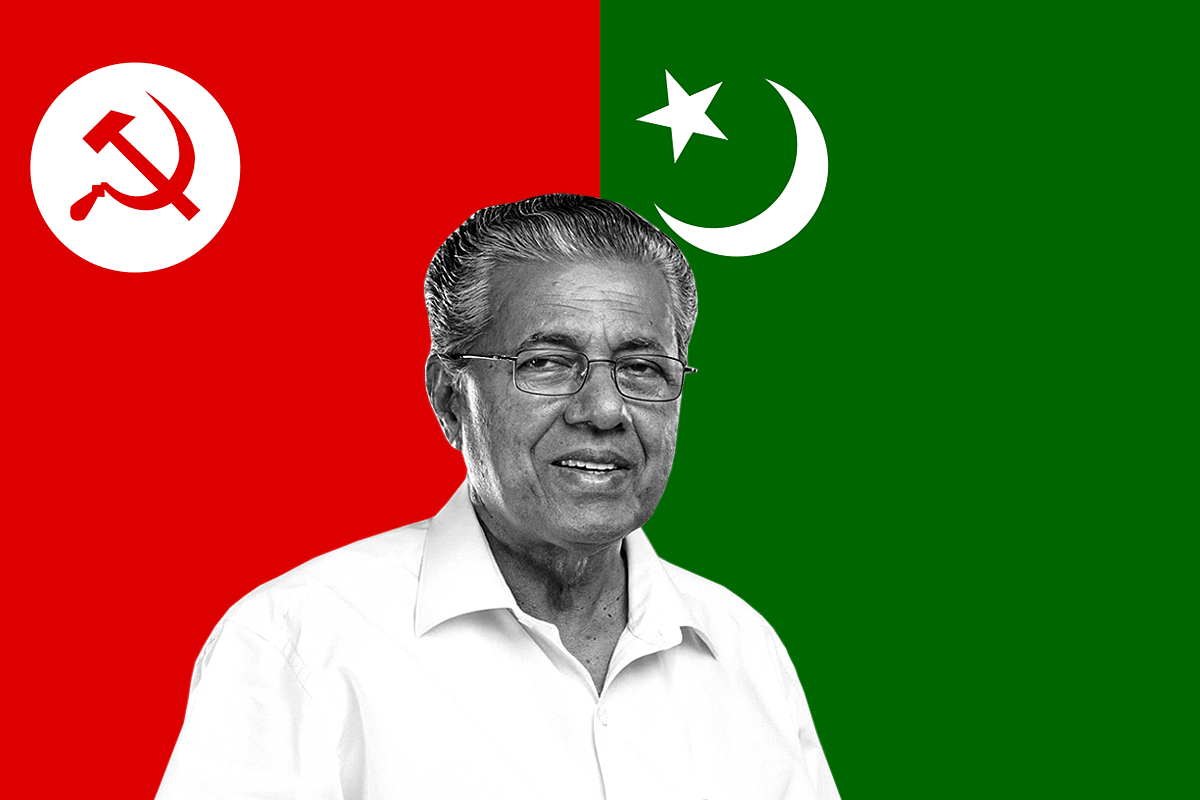 In 1985, the Communist Party of India (Marxist), the CPM, was strongly divided over a singular issue in Kerala – on whether to enter into an electoral alliance with the Indian Union Muslim League (IUML), or not.

The plan was called ‘Badal Rekha’ and was mooted by a senior Malayalee Marxist named MV Raghavan. As identity politics goes, it was a pragmatic move, and as the results of the 1984 general elections showed, a desperate one, since the Left had been almost wiped out in Kerala.

They managed only a solitary win, in Kottayam, in the face of a gigantic sympathy wave for the Congress, following the assassination of Indira Gandhi in October 1984. As it is, the Communists were already a disheartened lot, after having lost the 1982 assembly elections fair and square to a Congress-led coalition. So, with fresh elections looming in 1987, the Left needed to take a call soon, if it was to recover.

Unfortunately, ideology trumped pragmatism, there was terrible bad blood amongst the Communists, the plan was junked, and Raghavan was unceremoniously booted out. According to political observers of the day, Raghavan was set up for his fall from two sides – from above, by EK Nayanar, and from below, by a young, ambitious, and upcoming party functionary named Pinarayi Vijayan.

In the end, though, the Left won well in 1987, not least because of serial bungling by Congress Chief Minister, K Karunakaran, and the Muslim League stayed on with the Congress-led United Democratic Front (UDF).

37 years later, when an older, but no less ambitious Pinarayi Vijayan is Chief Minister, a new, improved ‘Badal Rekha’ is afoot in Kerala. Speaking to the press earlier in the week, in his capacity as convener of the Left Democratic Front (LDF), senior Marxist EP Jayarajan openly invited the Muslim League, and a former ally, the Revolutionary Socialist Party (RSP), to join the Left’s fold.

As expected, the Muslim League politely declined the offer, the RSP managed a “no comment’, and Jayarajan was ‘forced’ to go back on his offer publicly. But the point was made; after a long hiatus, the Communists were casting their nets once more, this time in zealous earnest.

So, what’s going on? Why would the Communists make such an open offer to Islamists and Socialists, just a year into their term, and still two years away from the next round of elections?

In a way, this offer is a logical progression, since it seeks to consolidate the identity vote in Kerala under a single banner. It follows upon a veritable coup which Pinarayi Vijayan managed to swing in 2020, when he got the Kerala Congress, a party of the Christians, to break an age-old alliance with the Congress and join the Left. This shattered the back of the Congress, and helped the Left win both the local body polls of December 2020, and the May 2021 assembly elections, in style.

Second, is the timing: readers will note that the offer comes in the same week when the internet is flooded with convenient leaks of political strategist Prashant Kishor’s grandiose plan to revive the Congress.

As it is, the Congress is down to just one large state where it can truthfully claim to be the natural party of governance – Chhattisgarh. They’ve just lost The Punjab, probably for good, and Rajasthan hangs by a thread.

In the rest, they are either the rump of a rickety coalition, or nowhere. Kerala should have been theirs to govern, but the exit of the Christian Kerala Congress put paid to that surety. Ironically, the situation is broadly the same for the Communists. All they have left is Parashurama’s axe-hewn sliver of land.

Imagine, therefore, the severe heartburn in Congress circles, and imagine how much value they would now give to Kishor’s ‘master strategy’, if it comes apart at the seams in the very week of its unveiling? The Congress would score a duck in Kerala if the Muslim League and the RSP went with the Left.

Third, is the broader intent: the Communists sense that they could be a grain around which a pearl of a new opposition structure might be fashioned. Readers may note two points here: one, Tamil Nadu Chief Minister, MK Stalin, recently addressed the Left in Kerala, in Malayalam; and two, the only prominent face to defend the Muslims of East Delhi, when the bulldozers and JCBs arrived to demolish their illegal constructions in Jahangirpuri after the Hanuman Jayanti riots, was veteran Communist Brinda Karat.

So, the Marxists’ offer of alliance to the Muslim League and the RSP are, equally, a consolidation of the identity vote, a timely counter to Kishor’s plans for reviving the Congress, and a step towards trying to build a pan-Indian, non-Congress opposition grouping which might take on the Bharatiya Janata Party (BJP).

To avoid any doubt, EP Jayarajan backtracked on his backtracking (par for the course in Kerala!) to reiterate his party’s intentions, in an interview with Janam TV. This means that the offers to the League and the RSP are extremely serious, and still very much open, no matter who says what.

Can it work? Might the Muslim League and the RSP join the Left, and if yes, why?

Taking the Muslim League first, they command the decisive vote in about a third of the 140 assembly seats in Kerala. But in the past decade, they have come to realize that no matter how loyal they, and their flock, remain to the Congress, their chances of being part of a government are dwindling year upon year.

This is because the Congress lost the bulk of its traditional Nair vote base to the BJP, as a result of which, the winnability of the Congress’s Hindu candidates has fallen like a stone; barely a handful are able to win on their own steam. The balance few win only because of the minority-identity vote.

As a result, the Muslim League knows that the longer is sticks with the Congress, the longer it will stay out of power; and in the process, it will be further increasingly vilified as proponents of a cultural separatism which is inimical, and intrinsically alien, to India. Who wants that?

Now, the League and the Communists coming together is not a new phenomenon; they’ve been allies before in Kerala. Further, as numerous designer protests and riots over the past few years have shown us (from the protest meet at JNU on Afzal Guru, to Shaheen Bagh, the on-demand Delhi riots of 2020, to the Karnataka Hijab hubbub of this year), Islamists and Leftists have now become natural bedfellows.

This affinity also offers a symbiotic self-preservation, and more electoral opportunities, particularly at a time when the Congress is progressively unable to perform its primary duty – of being the “victimized minorities’ valiant protector from the big bad BJP”.

A well-played volley could even re-position the Communists as a ‘secular’ bulwark, or at the very least, ahead of the other aspirants presently in the race, like Arvind Kejriwal or Mamata Banerjee. The Muslim vote has much value in some areas.

The RSP, on the other hand, has no such pan-Indian, or even pan-Kerala ambitions. It is a small, sub-regional outfit which, for decades, used to consistently win a handful of assembly seats under the late Baby John – a socialist who derived his ideological roots from the Anushilan Marxists, who broke away from Jai Prakash Narayan, Ram Manohar Lohia, and the Congress Socialist Party in the 1940s.

On date, the RSP has no seats in the Kerala legislature, and only a solitary MP – NK Premachandran from Kollam – whose success is partly on account of the identity vote supplied by the Muslim League, and partly because of the regard locals yet retain for the late Baby John.

Nonetheless, the RSP does retain some residual influence of the identity vote in about a dozen assembly seats, mainly in the Kollam region of South Travancore. The Communists would be pleased if the RSP returned to the Left fold, because Kollam region is also where the BJP has now started consistently polling 10-15 per cent of the vote. Indeed, the BJP came a firm second in Chathannur assembly seat with 31 per cent vote share, in 2021.

What does this assiduous wooing of Islamists and Socialists by the Marxists mean?

If the Congress-led coalition disintegrates in Kerala, that would ironically make the BJP the state’s de facto opposition – without a seat in the house! It would be precisely the fillip the BJP needs, to break out of a Nair echo chamber it is presently stuck in.

Now, if the Congress loses the minority vote, Rahul Gandhi will not get re-elected from Wayanad in 2024, because the Muslim League has a commanding presence in three of the seven assembly segments, and roughly 60 per cent of the voters are either Muslims or Christians. And this writer’s 2016 prediction, of Ommen Chandy being the last Congress Chief Minister of Kerala, will stay true.

Will the Congress allow matters to descend to that sorry state, or do they have it in them to retain their flock? The cleft-stick situation is that they can thwart the Marxists’ courting of Congress allies, but only by raising their ‘secular’ rhetoric; and in this day and age, in Kerala, that would inevitably result in the remaining Hindu Congress vote (a sizeable segment of which are Nairs) shifting to the BJP.

It is still early days in this new ‘Badal Rekha’, and the Left’s EP Jayarajan has thus far only backtracked twice, but pound to a penny, it appears that the Muslim League and the RSP will eventually realise that their electoral fortunes are better served by joining the Communists.