Modi Versus Mamata: Why Nandigram May Decide The Future Path Of Indian Politics 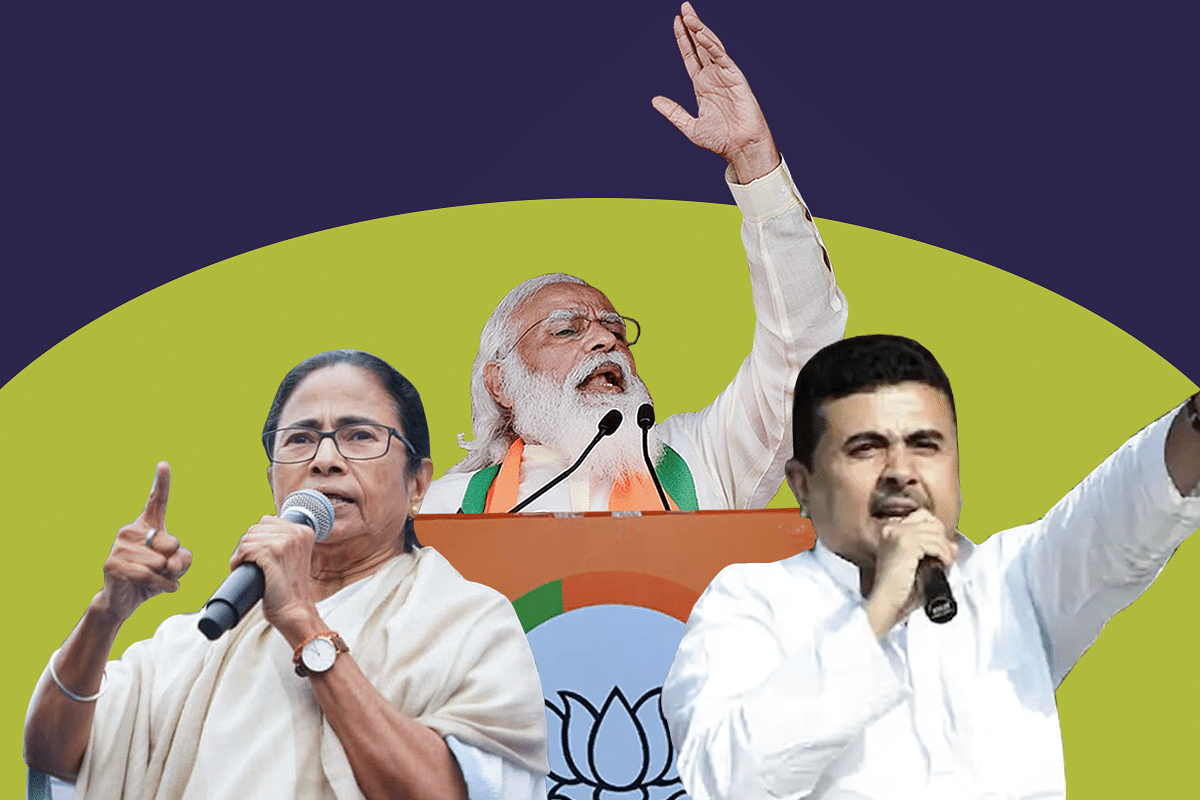 This could be Mamata Banerjee’s last stand. If the West Bengal Chief Minister loses her make-or-break battle in Nandigram against Suvendu Adhikari, her political career will be over.

If she wins, Banerjee could create the centripetal force around which the Opposition will coalesce ahead of the 2024 Lok Sabha election. The real contest in West Bengal therefore is between Prime Minister Narendra Modi and a fractured national Opposition looking for a chink in Modi’s electoral armour. Bengal may provide a glimpse of one.

Mamata’s injury could not have come at a more opportune time for her. The momentum in Bengal was shifting against the Trinamool Congress (TMC). The BJP’s star campaigners, led by Modi, were in the ascendant.

That has changed. Will it mark a turning point for the TMC?

In the 2016 assembly election, Adhikari, then the TMC’s star performer, won 67 per cent vote share. It was part of TMC’s landslide victory. Communal polarisation had set in.

Banerjee, benefiting from the BJP’s counter-polarisation, has a lock on the 34 per cent Muslim electorate in Nandigram. The Left-Congress-ISF alliance is unlikely to make a significant impact on what is effectively a binary BJP-TMC contest. To ensure victory in Nandigram, Banerjee needs virtually all the Muslim votes and a slice of the Hindu vote.

Adhikari is a formidable competitor. Banerjee made her reputation as a political street fighter in Nandigram in 2007 but it was Adhikari who did the ground work and nurtured the assembly constituency

The BJP knows that, in order to beat Banerjee, Adhikari will need over 50 per cent vote share in a straight fight with the West Bengal Chief Minister. He will get a negligible vote share from the 34 per cent Muslim electorate. Adhikari will therefore need to win nearly three quarters of the 66 per cent Hindu vote in this appallingly communal election.

That’s a tall order. Banerjee has considerable pan-Bengal appeal. She knows that if she garners just over a quarter of the Hindu vote, she can stop Adhikari in his tracks.

The joker in the electoral pack is the Left-Congress-ISF alliance. Both the Trinamool Congress and the BJP hope the alliance will cut into the other's vote share.

The presence of the Islamist ISF in the alliance could put off fence-sitting Hindus. But who will they gravitate towards?

Possibly an even split between the BJP and TMC.

That leaves both Banerjee and Adhikari with the tantalising prospect of edging past the finishing line in a contest with razor-thin margins.

By campaigning in a wheelchair following her injury, Banerjee is counting on a sympathy vote. It could prove crucial.

The BJP still doesn’t have a chief ministerial face. Modi, Home Minister Amit Shah and a retinue of Union ministers have had to compensate with extra rallies.

The TMC has a record of political violence for which Banerjee as a party leader must be held to account. But to her credit, West Bengal’s financial performance over the past 10 years has been surprisingly good.

The best decision she made as Chief Minister was to appoint a technocrat, Amit Mitra, as Finance Minister and let him do his work without interference for 10 years.

Mitra has stabilised the state’s finances. Bengal’s gross domestic product (GDP) has grown from under Rs 5 lakh crore in 2010-11 to an estimated Rs 15 lakh crore in 2019-20. The fiscal deficit has been brought down to 2.18 per cent. Mitra has been Finance Minister for the TMC’s full tenure, helping the state pursue long-term fiscal policies.

Because of the TMC’s brand of violent politics, Mitra – a former secretary-general of FICCI – has, however, been unable to attract industry to the state.

At 66, Banerjee knows that even if the TMC wins the 2021 assembly election, it could be her last election. Nephew Abhishek Banerjee is set to take over her mantle. He could be the TMC’s Achilles heel. Widely disliked for his arrogance, Abhishek Banerjee works closely with political consultant Prashant Kishor.

West Bengal has been unlucky to suffer 34 years of privations under the Left and now 10 more of political violence and corruption under the TMC.

The BJP is hoping that its 41 per cent vote share in the 2019 Lok Sabha poll can be replicated – and increased – in the 2021 assembly election. But it knows that the 2019 general election was fought under a pro-Modi wave following the Balakot air strike. All BJP boats rose electorally in its wake, including in West Bengal.

Balakot shifted the momentum from the BJP’s triple state defeats in Rajasthan, Madhya Pradesh and Chhattisgarh in December 2018. In early February 2019, opinion polls were projecting an average of less than 250 Lok Sabha seats for the BJP. Balakot lifted it to 303 seats.

Elections can turn on such events. Banerjee’s injury (and the theatrics that followed) have struck an emotional chord. In a closely fought election, it could well prove a turning point.