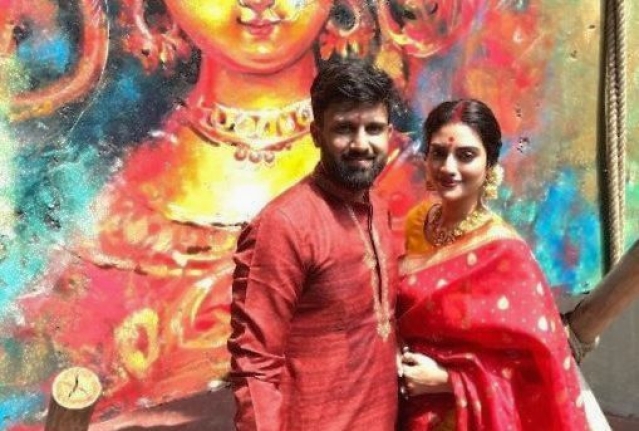 Bengali movie actor turned politician and Member of Parliament from Basirhat, Nusrat Jahan Ruhi Jain is finding herself again in the crosshairs of mullahs.

As if marrying a Hindu Jain was not bad enough, she caused a lot of heartburn among them by wearing a sari and mangalsutra as well as sporting a big bindi and sindoor while taking oath as a Parliamentarian back in July.

This time, her participation in the Durga Puja celebrations has put her in their firing line again. In the videos of the event, she is seen completely immersed in puja with folded hands, closed eyes and lips moving quietly repeating shlokas as chanted by the priest.

As expected, this got the goat of mullahs. Mufti Asad Qasmi, vice-president of Ittehad Ulema-i-Hind, termed her act as ‘haram’ and said that she was bringing a bad name to Islam by her actions and defaming Muslims and Islam.

The media quoted the Mufti as saying:

It is clearly mentioned in Islam that a Muslim can worship only one God and no other entity. By flouting this fundamental tenet, Nusrat Jahan has brought a bad name to Islam. It is better if she changes her name and religion. This is not the first time she has celebrated puja. She has done it in the past too. Her act is ‘haram’ in the eyes of Islam. I reiterate she must change her name when she is doing everything against the tenets of Islam.

This Mufti is not alone. Earlier too, some mullahs, who have appeared on TV debates on the controversy surrounding Nusrat Jahan, have also broadcast similar views. According to these Muftis — the good and learned Muslims — Nusrat Jahan is a bad Muslim. They are right.

As scientist and author Anand Ranganathan put it succinctly, “The fact remains that a practicing Muslim who believes in the Sharia and every single word that there is in the Holy Koran, is a good Muslim, while a practising Muslim who sings, dances, plays sports, drinks, fornicates, supports Muslim women who reject the burqa or the Hijab, can draw a portrait of whosoever he wishes to, is gay, and is fine with all his fellow Muslims being all of the above, is a bad Muslim.”

There is no doubt that if we go by Islamic scriptures, Nusrat Jahan’s Hindu way of life is clearly un-Islamic. Mullahs are therefore right. She is a bad Muslim.

Do not marry idolatresses (al mushrikāt) till they believe; and certainly a believing maid is better than an idolatress even though she would please you; and do not marry idolaters (al Mushrikīn) till they believe (hata yūminū), and certainly a believing slave is better than an idolater, even though he would please you. These invite to the Fire, and Allah invites to the Garden and to forgiveness by His grace, and makes clear His revelations to mankind so that they may remember.

However, Muslim men are allowed to marry non-Muslim women of the book.

Second, Nusrat wears saris and a mangalsutra, sports a bindi and sindoor, all of which are also un-Islamic. Fatwas are clear on this.

Maulana Maududi, founder of Jamaat-e-Islami and an architect of Pakistan’s full-blown Islamisation and who is considered an authority par excellence on Islamic law, says that ‘the dress of each people is the qaumi-tongue through which it manifests its qaumiyat and acquaints the world with it’. That it is ‘part of the culture of a people like its language and script. If these are given up, the qaum melts away into the general mass.’

He writes in his book, Libaas ka masla, that Islam ‘requires that things which polytheism and idolatry have made their symbols be banished from your dress — for instance, the (sacred) thread, the cross, pictures, or similar things which are customary with non-Muslims.’ He then tells a Muslim living in a land where most of the people are non-Muslim to ‘incorporate some such insignia which sets him apart.’

‘...that there must be something in the dress of Muslims by which they can be distinguished and recognized, something which keeps them from getting lost among non-Muslims, something by which Muslims can recognize one of their own so that social life among them is strengthened.’

According to the Fatawa-i-Rizvia, wearing a tilak is also kufr. By extension of the same principle, so is sindoor. ‘To acquiesce in kufr even for a second is as much kufr as it is to consent to kufr for a hundred years,” it says.

Not just for a second, Nusrat Jahan has sported sindoor many times. Clearly, she has committed a sin. By wearing a sari, a Hindu traditional dress, she is acting like a kufr and is thus guilty of kufr.

As far as her participating in Durga Puja is concerned, fatwas declare it as haram.

Mufti Kifayatullah, Islamic scholar in the first half of the 20th century, who was a founder member of Jamia Millia Islamia (Delhi) and who is considered a moderate, declares in his fatwa that:

“It is haram to participate in the religious gatherings of kafirs and polytheists in which there are manifestations of kufr and polytheism, in which idols are worshipped or honoured.

“To go to such gatherings even with the intention of amusement, even for sair-tamasha, even to establish unity with them, or to add to the raunaq, or for any work which comes within the definition of kufr, and to contribute towards the expenses of such gatherings is haram.”

According to the Fatawa-i-Rizvia, ‘the places of worship of the kafirs are places of the Devil.’ It also declares joining in the prayers of kafirs, going to their places of worship, participating in Dussehra, placing flowers on idols, and blowing the conch, among numerous other things, as kufr.

Nusrat Jahan is thus guilty of shirk — the sin of practicing polytheism — which instantly throws her out of Islam and punishment prescribed for this sin is nothing short of burning in hell (fire).

Of course, one can blame the fatwa-churning Mullahs and term them outdated, conservative and orthodox, and deride them as bigots.

But these Mullahs are not issuing such fatwas or directives out of thin air. These are based on the Quran and Hadith, the sacred inviolable word of Allah himself.

When Maulanas say that participating in religious gatherings of polytheists is haram, they are only relying on Islamic fundamentals. It is the Quran that says:

Verily you, (Unbelievers), And the (false) gods that You worship besides Allah, Are (but) fuel for Hell! To it will you (surely) come! If these had been gods, They would not have got there! But each one will abide therein. There, sobbing will be Their lot, nor will they There hear (aught else)

For polytheists and their religious deeds, Allah declares:

The works of such bear no fruit; In Fire shall they dwell

We wonder why these Mullahs think so lowly of women and get so worked up, especially when a woman like Nusrat Jahan indulges in ‘un-Islamic’ acts but is it not the Prophet who says, "After me I have not left any affliction more harmful to men than women?”

It is the Quran that declares:

Your wives are As a tilth unto you; So approach your tilth When or how you will…

Why do Mullahs have problems with Nusrat Jahan wearing a sari or mangalsutra or sporting sindoor and bindi?

Is it any wonder then that Muslims do exactly the opposite of what Hindus do? Even the way Muslims wear dhoti is opposite of Hindus apart from numerous other practices.

In the Hadith, when the Prophet sees one of his followers wearing saffron clothes, he mocks him. “These are the clothes (usually worn by) the non-believers, so do not wear them,” he says and directs the follower to burn the clothes.

“Do not slice meat with a knife because that is what the Ajamis (Iranians) do, instead bite it with your teeth—that is very pleasant,” the Prophet orders.

At one place he tells his people that because the Jews and the Christians ‘do not dye their hair, you do the opposite’.

The Prophet reasons: “Opposing the kafirs is necessary for doing better things. A Muslim should always act according to this rule. He should accept the better and wiser course. If that is opposed to the way of the kafirs, it is all the better.”

Then why do we blame the Mullahs? Aren’t they merely and faithfully following the word of Allah and his Prophet?

One, thus, sadly must resign to the fundamental reality that the Mullahs are indeed right when they say Nusrat Jahan’s ‘Hindu way of life’ is un-Islamic. She is free to practice her faith as she likes because the Indian constitution gives her that right but if we go by the fundamentals of Islam, she has clearly committed shirk.

But shirk is good. The more the Muslims indulge in it, the better for them and society. Hence, Nusrat Jahan’s defiance is praiseworthy for it is the beginning of the normalisation of kufriya. Godspeed!

Postscriptum: Quotes from the Quran, Hadith and fatwas are sourced from Arun Shourie’s seminal work, The Land Of Fatwas: Sharia In Action.