No Stranger To Bombs: This Has Been One Of Few Thriving Enterprises In Bengal Since The Communist Era 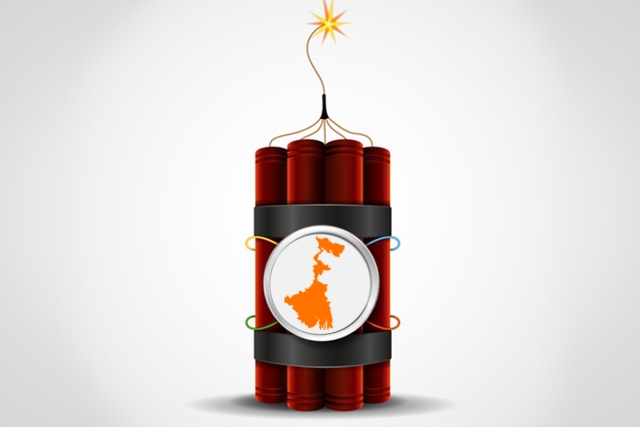 In post-Independence Bengal, it was the red radicals (Naxals) who revived the manufacture of bombs and their use.

Early last week, a powerful blast ripped off a portion of a club in Beleghata in north-central Kolkata.

Explosives kept inside the club, whose members are reportedly close to the Trinamool, are said to have triggered the blast. Forensic experts say they recovered traces of sulphur and ammonium nitrate from the blast site.

This explosion has, once again, exposed an ugly fact about Bengal’s infamous crude bomb-making units patronised by ruling politicians.

Crude bombs are routinely hurled against political opponents and have claimed many lives in the state.

It all started when the Communists had become a force to reckon with in Bengal. The Congress, which injected the culture of political violence into Bengal’s body politic, had started the practice of using crude bombs against the Communists since the early 1970s.

Even in that era, however, Bengal was no stranger to bombs. The revolutionaries of Bengal often used bombs against the British and many have gone to the gallows for that.

Khudiram Bose, one of the youngest martyrs of the Independence movement, was executed for hurling a bomb at a carriage carrying two British women.

Aurobindo Ghosh, who became an ascetic and founded the Sri Aurobindo Ashram in Pondicherry, was an accused in the famous Alipore Bomb Case. Many other celebrated Bengali revolutionaries and nationalists were involved in making and hurling bombs at the British.

After Independence, however, Bengal turned its back on bomb-making and remained peaceful till the beginning of the violent Naxal movement in the late 1960s.

In post-Independence Bengal, it was the red radicals (Naxals) who revived the manufacture of bombs and their use.

The spread of red terror in Bengal also coincided with the gradual and violent spread of Marxist tentacles across the state.

And the Congress, which was in power most of those turbulent years, responded in kind. Since then, the culture of hurling bombs at opposition (Communist) politicians, political rallies and gatherings and Communist party offices gained currency.

But it was under the Communists, who came to power in 1977, that bomb-making became a thriving cottage industry in Bengal. That’s because the Communists realised that terror was a powerful weapon to subjugate and silence political opponents.

With nothing to show in terms of governance, and with the state’s economic downslide that they had triggered through their short-sighted politics only accelerating under their rule, the Communists became increasingly reliant on terror as a means to strengthen their grip on power.

It became very common under the 34 years of Marxist rule over Bengal for bombs to be hurled at political rallies or gatherings of opposition parties--the Congress and then the Trinamool.

Rarely did any opposition rally pass off peacefully without being attacked with bombs by the harmads.

Bengal is perhaps the only state (with perhaps the dishonourable exception of Tripura which also came under Communist rule) in India where many criminals and history-sheeters can be seen without their limbs. All are casualties of bombs going off accidentally while being made or transported!

As the political fight with the Trinamool intensified in the first decade of this century, so did bomb-making and the use of bombs in clashes.

Trinamool leaders claim to have recorded at least 239 bomb attacks on their rallies, meetings and on their offices during the eight year period from 2003 to 2011.

In a state which became an industrial graveyard during the dark years of Communist rule, bomb-making units were perhaps one of the few thriving enterprises in Bengal. Thousands were gainfully employed at such units.

But all those bombs could not keep the Marxists in power permanently as they had expected. They lost power to the Trinamool, which kept up the inglorious bomb-making tradition alive even though it had been a victim of it.

Not only did the Trinamool keep this tradition alive, it encouraged it.

There has been little development in the state and the Trinamool’s doles have not been able to put a lid on public anger over its non-performance on many fronts.

Thus, the Trinamool now finds itself relying increasingly on terror tactics to contain the rise of the BJP in Bengal. There have been countless bomb attacks on BJP leaders, workers, offices, gatherings and rallies.

To meet the renewed demand for bombs, a large number of bomb-manufacturing units have reportedly come up all over the state.

But it is only when a mishap occurs in one of them that people get to know about their existence. Last week’s explosion was one such mishap.

But it won’t be the last. As Assembly elections draw near and the BJP mounts a determined bid to dislodge the Trinamool from power, bomb attacks on BJP functionaries, supporters, offices and rallies will only increase.

However, like the Marxists, the Trinamool also won’t be able to hold on to power with bombs.