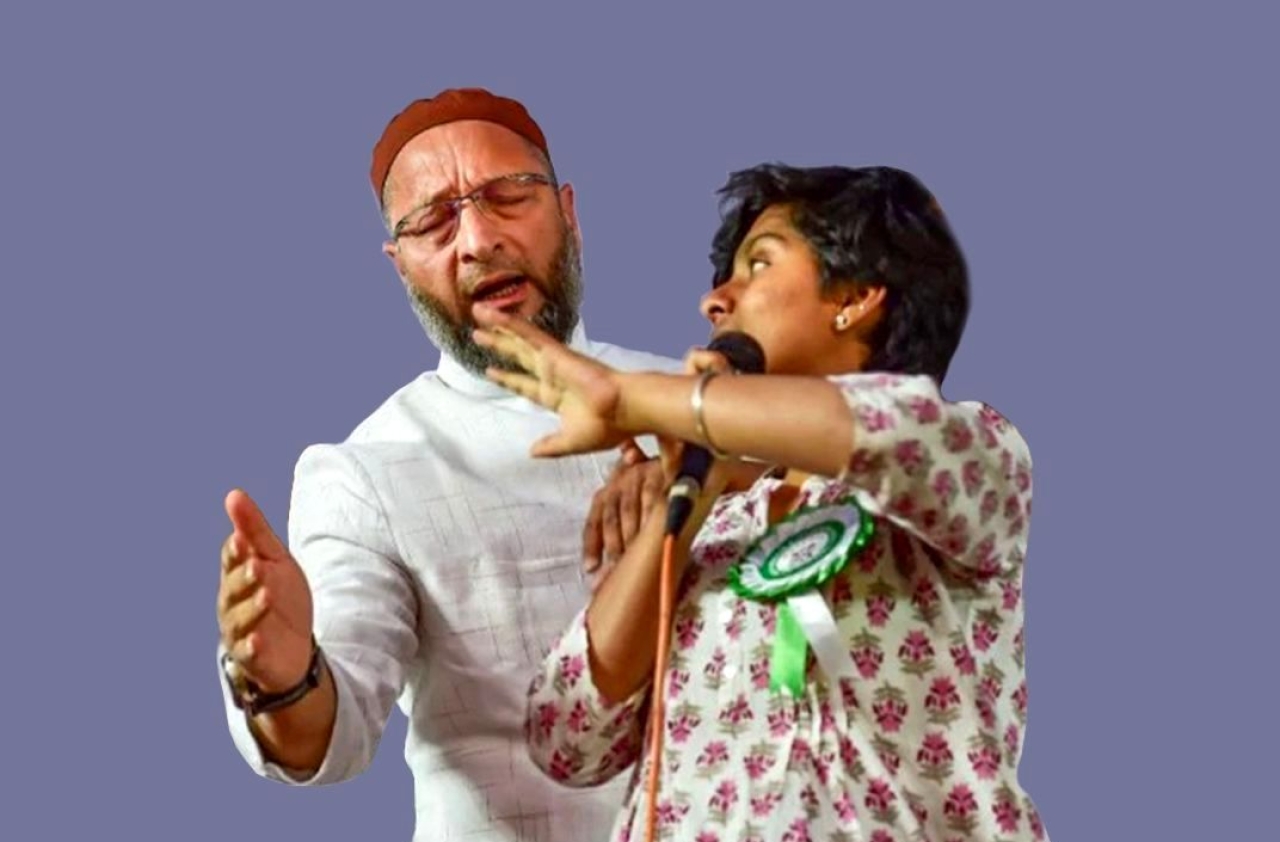 Amulya, the girl who raised ‘Pakistan Zindabad’ slogans at a rally.

It is amusing that people who show ardent enthusiasm for chanting ‘Pakistan Zindabad’ are also the ones to take grave offence at casual banter suggesting them to move to Pakistan.

Interestingly, the same set of people also keep raking the fear of India turning into Pakistan.

And whenever a comparison is made between India and Pakistan on any ground, the sanctimonious lot strikes back to suggest that ‘patriots’ must raise the bar and challenge the West.

So if Pakistan is offensive as a suggestion for a future home and a nation far from being emulation-worthy, what is there to hail about Pakistan?

The sham argument that it is about pacifism is given away by the situations in which the slogan is raised. Whether in Bengaluru or in Meerut, the sloganeering wasn't part of some bilateral student exchange programme or an art and culture fest.

These slogans have been part of highly communal and fanatically surcharged protests, where barely concealed secessionism reverberated in the air.

The toxic environment surrounding the CAA protests is a repeat, albeit on a smaller scale, of the darkest chapter of Indian history, namely the creation of Pakistan.

Those who try to make light of ‘Pakistan Zindabad’ as a harmless slogan, want the wounded civilisation to be playful with its most painful memory and ugliest scar. The creation of Pakistan is marred with so much blood that all the water drawn from Ganga, a thousand times over, will lighten the shade of the tragedy to not even crimson but only carmine.

The country which was insisted upon had neither geographical contiguity nor a historical backdrop. Born amidst a monstrous carnage, if the expanse called Pakistan was bound by a single common feature, it was hate; seething, blinding, unremitting hate.

Condemned to live with the curse of violence which it solicited with abandon to seek it's fruition, the country has failed on every other count. But the hate survives because it is its primary character.

Pakistan is not even a bygone tragedy one would try to get over. It continues to cause the same pain and anguish as at the time of its creation.

Not only does Pakistan seek to expand its hate territory in India, it takes revenge on its own minorities to satisfy its collective sadism. Not a week passes without girls of all ages being abducted, raped, married and forcibly converted. Some of them also die. Police and courts look the other way and ringleader Maulvis are feted by politicians.

The sword of blasphemy law hangs over the minorities all the time. Schools teach that Hindus are second-grade human beings and unworthy of trust. If there is a Hindu child in the class, the teacher ensures this humiliating part is recited by the Kafir child himself. While the constitution bars non-Muslims from occupying top posts, armed forces ensure that barbers, cobblers, water carriers, sanitary workers and other menial workers are only non-Muslims.

This is the Pakistan that is coveted on the streets of Meerut and this is the Pakistan, liberals want no objection against being applauded as ‘Zindabad’. Not to be forgotten, it is the same liberals who keep tilting at windmills to fight fascism and Nazism every hour of the day and every day of the year.

Neither of the two groups are ignorant of the reality of Pakistan. While the twenty something youngsters at Lisari Gate look forward to extending Pakistan in Meerut one day;  Professors, journalists and activists of Left persuasion cheerfully defend the former's right to demand so.

Which brings us back to an important point analysts like Tarek Fateh keep making, that Pakistan is as much a political entity in our neighbourhood as a vicious state of mind. Opposed to polytheistic and pluralistic idea of tolerant India, a residual tumour which survived the creation of Pakistan continues to risk the national health.

Pakistan Zindabad, therefore, is not even a salute to a country, however ugly and repugnant, it is a toast to Islamist totalitarianism. If an analogy were to be made, the Zindabad business is not about hailing a random country, say Germany, but rather cheering Nazism.

The epicentre of world terror and a horror for its minorities, the Islamist state of Pakistan, likewise, continues to be a threat to the civilised world.

Get Swarajya in your inbox everyday. Subscribe here.
Tags:
446 Shares