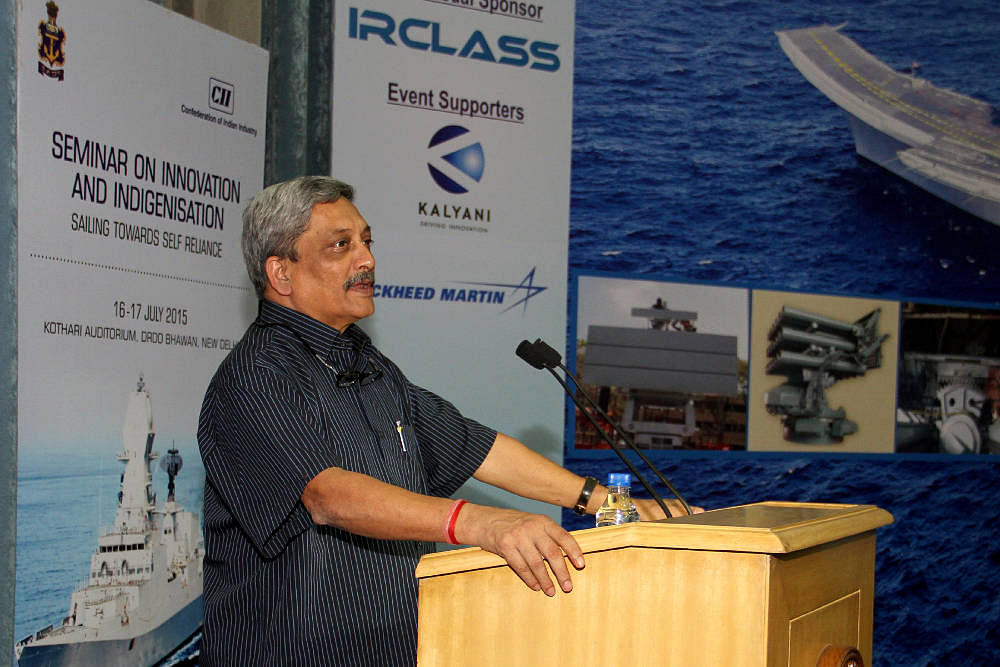 The Independence Day broadcast by Defence Minister Manohar Parrikar mentioned about the near and dear ones of those who had laid down their lives for protecting the nation. There were compliments for successful CI operations, disaster and humanitarian relief undertaken at home and abroad.

It talked about the Defence Ministry’s constant endeavour to work for the welfare and well-being of serving and ex-service men (ESM) – including highest priority for OROP; concern for a huge number of cases on service matters pending in different courts and formation of a high-level panel to suggest steps to lessen the number of such cases; computerized pension enquiry project Suvigya for ESM to know pension entitlement and Married Accommodation Project.

ARPAN 3.0 or Army Record Officers Process Automation has been launched as part of military digitization, and proposals worth over Rs 1,60,000 crore have been approved. Over 800 x 155mm artillery guns worth nearly Rs 16,000 crore and more ammunition are being purchased.

Indigenous Akash Air Defence missile system has been handed over to IAF. The contract for 36 Rafale aircraft is being negotiated. Apart from these, he spoke about the recent undocking of indigenous aircraft carrier in the making, INS Vikrant, first of Scorpene submarine, commissioning of marine police stations, naval bases and new Coast Guard Air Enclave at Bhubaneswar. Of course, there were compliments for DRDO and other defence-related establishments.

The first glance will tell you that the script was perhaps prepared by an MoD babu who had helped Antony churn out such messages during the past decade. One wonders whether Parrikar was reading out the paper for the first time given to him just before the broadcast.

Had he given a little bit of thought to what he eventually spoke, he would have realized that his  exhortations ‘about constant endeavour to work towards the welfare and well-being of serving and ESM’ plus ‘thoughts with near and dear ones of those who laid down their lives for protecting the nation’ rang completely hollow.

If he is so concerned about ESM, how come he did not even care to mention the brutal police assault on the peacefully protesting ESM just the previous day? Does he understand what this has done to the psyche of the ESM and the military? Does he understand what it means to an 82-year-old veteran to have his medals taken off his chest by a thug of a policeman unleashed by his government?

Had Parrikar bothered to find out who this 82-year-old veteran is, he would have discovered that he is Bishamber Singh of 5 Grenadiers who fought in 1962, 1965 and 1971 wars and was decorated with a Sena Medal for gallantry.

Bishamber Singh still has the strength to snatch the baton from the cop attacking him, but Parrikar would not understand why this decorated veteran did not do so. Committees and panels are all fine, but why is the Supreme Court saying that military personnel should be dragged to the apex court? Does that indicate anything to Mr Parrikar?

Surely, not fighting wars every few years is not why the military is losing respect. Has Parrikar bothered to examine how systematically the military’s prestige, pays and perks have been undone, even denigrated right from the 3rd CPC?

What about the stated concern for war widows sitting at Jantar Mantar with the Defence Minister attending the Kargil Diwas banquet? Why are the war widows being subjected to continuing legal battles for their dues? Why can’t these cases be withdrawn? The bureaucrats of MoD don’t have the guts to face the veterans. But, why can’t the MoS (Defence) speak to the veterans and widows at Jantar Mantar instead of addressing colonies and condominiums by the dozens at the time of seeking votes?

How come the Defence Minister had the Army Chief at his side when he called the ESM representatives to his residence? Why a Service Chief at all and, if at all support was needed, why not all the Service Chiefs?

Surely, the Defence Minister realizes that Suvigya and ARPAN are a far cry from what digitization of the military requires. With Arpan 3.0, all Junior Commissioned Officer (JCOs) and below will be able to access their records.

It will take another year to automate all the 45 Record Offices. It is a joint venture between the Army and Tech Mahindra, the project cost being Rs 1.9 crores. Obviously, MoD had timed the launch of Arpan 3.0 with the launch of Digital India Week by the PM. But then, Arpan 3.0 is an exclusive Army initiative. But this apart, what exactly has the MoD done for digitization of the military?

What is the status of the digitization of the MoD, Services HQ, intra-service and inter-service linkages, digitization process to integrate procedures between the MoD and Services through HQ IDS, procurements processing, digital link with the IFAs and the like? The Defence Communications Network should be coming out in the next 2-3 years, but common software development is yet to take off. Common standard protocols for the three Services have not been developed yet. Common security solutions are yet to be evolved.  Issues like big data handling, data storage and use of cloud require much thought.

Services cannot exchange operational pictures, and separate screens are used even in the Interim National Command Post. Information systems have come about in a disparate manner in the three services, but that too mostly bottom up.

Their integration and the process of ‘pulling together’ existing systems and those under development require more thought. The military can be hardly integrated at the required level without a CDS. The Army’s operational information systems are likely to be fully fielded only around 2022-2024.

The Tactical Communication System (TCS), which should have been fielded a decade back, is a couple of years away.

E-learning has not taken off because of lack of digitized secure line pan-military. Army Strategic Operational Information Dissemination System (ASTROIDS), a GIS-based application, was sanctioned in 1995 (Rs 10.75 crores allotted for Phase 1).

But, DRDO could not deliver the requisite software. A second sanction in 2003 for upgraded software for a network to be extended to all Commands and Corps by December 2012 was a fiasco as well. Hopefully, the political hierarchy will understand that the solution lies with the private sector, not DRDO.

It is atrocious in this age to distribute CD-ROMs of maps instead of GIS flowing on digitized networks.  Geospatial data and its exploitation, central to battlefield management, requires developing common geographic reference framework in conjunction with agencies responsible for the production of geospatial data.

The Services are using maps based on different datums and projections. Unless these aspects are addressed collectively, results from the application developed for C4I2 Systems will remain unpredictable.

The Defence Intelligence Agency (DIA) is the central repository of all intelligence inputs pertaining to the three Services, including IMINT and ELINT, but we are yet to integrate the aspects of topography with the DIA.

Adequate resources in terms of remote sensing, ELINT payloads and cartography are not available to produce high-quality fused data. In terms of cyber security, the US Military and PLA are spearheading the cyber projects in US and China respectively, while our military is a bystander.

Now that the Defence Minister has inaugurated Arpan 3.0, will he find time for more serious issues as mentioned here?

PM Modi announced Make in India on 15th August 2014, but then Parrikar admitted during the Aero India show this year that the current Defence Procurement Procedure (DPP) does not facilitate Make in India in the defence sector.

The new DPP, which should not have taken more than 3-4 months to define, is still a few months away. The private industry is still apprehensive that the ‘through-DRDO’ trick will continue to be played. In spite of all the hype around the relaxing of FDI in defence, does the Defence Minister understand why we have received offers for only a measly Rs 48 lakhs?

The Ministry of Commerce and Industry website admits that 50 percent of equipment held by the military is obsolete. CAG reports of past six years show the rot in DRDO, including the rampant corruption, and the fact that 30 percent of military equipment produced indigenously is sub-standard and costlier.

Late Dr Abdul Kalam headed a committee in 1993, which reviewed the appalling state of 70 percent military equipment being imported. It gave directions, which were approved by the government, that we should meet 70 percent of defence needs indigenously by 2014.

But in 2014, it was discovered we still were importing 70 percent of defence equipment. Although the joint secretaries of MoD were on all the boards of DRDO, DPSUs and OF, no heads rolled.

The bright spots in indigenization are ISRO and missiles. The Akash system mentioned by Parrikar was to replace the obsolete Kvadrat system of Army Air Defence (AAD) to provide AD cover to mechanized formations during fast manoeuvres. The project commenced in the early 1980s.

When the trials were conducted in 2006, it was found poor in mobility and in acquiring even slow moving helicopters. When the Army did not accept the system, it was dumped.

The IAF was given a brief to beef up other AD systems in a static role. Now, the Army is being given the Akash with the publicized “improved” version, but this too for being used in a static role. The replacement for the Kvadrat will probably be by an Indo-Israeli joint development of a missile system, which may take 15-20 years. Similarly, the 36 Rafale are probably years away and will only fill up a small part of the gaping voids in the IAF.

The Defence Minister must understand that Make in India is just one part of the defence. There is a crying need for the military to be part of strategic policy formulation and part of the higher defence set of the country, specifically to fill up the void of a National Security Strategy  Comprehensive Defence Review policy to establish credible deterrence to Pakistan’s and China’s asymmetric wars that we have been fighting for decades. The MoD must be reorganised, and HQ IDS must be fully merged with the MoD.

Military, being users, must be at levels of design, policy formulation and decision making in the official defence industrial complex; the DRDO, DPSU and OF. Presently, the military is being deliberately kept away even from the cyber security field. In USA and China, on the other hand, the US Military and PLA are leading the cyber warfare programs. Unfortunately, the Defence Minister addressed no such vital issues discussed here.