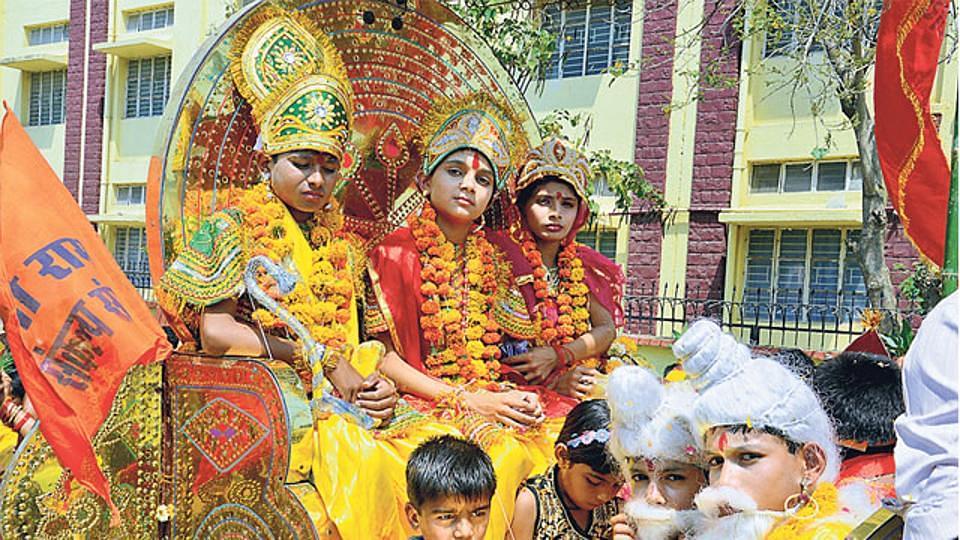 Over the last few days, the predominant colour in many public places in Bengal has been saffron. Jai Shree Ram, Jai Hanuman and Jai Bajrangbali slogans and chants of Har Har Mahadev have rent the air, and sent a chill down the collective spine of the Trinamool Congress, the Congress and the Communists of the state.

Ram Navami has never been celebrated in Bengal in a manner it is being this year. Despite the Mamata Banerjee administration’s covert and not-so-covert opposition to such public displays of piety by Hindus, rallies, Pujas in public places, processions and other events celebrating Ram Navami have been taking place since the past one week all over the state. The ongoing celebrations will culminate in a massive rally in the heart of state capital Kolkata on Hanuman Jayanti (11 April).

The upsurge in Ram Navami celebrations all over the state has taken everyone by surprise. Till just last year, Ram Navami used to be celebrated by only North Indian and some South Indian communities in the state. But this year, a large section of Bengalis have also joined in the celebrations. Social media is awash with Ram Navami greetings in Bengali and posters bearing images of Bhagwan Ram, Devi Sita and Bhagwan Lakshman have been plastered all over the state.

The exciting and sudden sweep of Ram Navami celebrations is nothing but early signs of a saffron surge in Bengal. Because there has been a distinct undertone of defiance, and assertion of one’s religious identity, in the Jai Shree Ram slogans that are reverberating across Bengal. Defiance at the state government’s failed attempts to discourage and put a lid on Ram Navami celebrations, and assertion of one’s Hindu identity because such assertion has been, till now, frowned upon by Communists, the Congress and the Trinamool Congress.

Sociologists interpret this year’s Ram Navami celebrations as a show of opposition by Hindus to Banerjee’s blatant minority-appeasement and defiance of attempts by her government to restrict and curtail the religious freedom of Hindus. The latest such attempt was the denial of permission by the Trinamool Congress-run South Dum Dum Municipality (Dum Dum is part of greater Kolkata) to hold public Ram Navami celebrations in an area under its jurisdiction. The Calcutta High Court on Tuesday ordered the civic body to grant permission for the celebrations.

The ruling Trinamool Congress’ shameful attempts to curtail religious freedom of Hindus has a long history. From disallowing a Durga Puja in a village due to objections from Muslims, giving stipends to muezzins and imams of mosques, thrashing school kids wanting to worship Devi Saraswati to imposing restrictions on immersion of murtis of Goddess Durga (which was struck down by the Calcutta High Court), diverting a major share of the state’s scarce resources for Muslims and condoning widespread attacks on homes and temples of Hindus by Muslims across the state, the hijab-clad Banerjee stands accused of being anti-Hindu simply to appease hardline Islamists. Six years of blatant minority appeasement (which also made her act against Hindus) has led to a build-up of rage among Hindus and this rage is now finding expression in Hindus of Bengal taking to celebrating Hindu festivals with such fervour.

True, many leaders of the Bharatiya Janata Party, Vishwa Hindu Parsihad, Rashtriya Swayamsewak Sangh and affiliated organisations have taken the lead in organising Ram Navami celebrations at many places or are closely associated with the celebrations. But the spontaneous and overwhelming response to the celebrations from Hindus cutting through all classes, castes and age groups is unprecedented. Had Hindus of Bengal not felt suffocated under Banerjee’s minority appeasement and had they not been angered by her shameful encouragement of hardline Islamists and dangerous Salafi preachers in Bengal, the public calls for Ram Navami celebrations may not have perhaps evoked such enthusiastic response.

Worried over this trend, many so-called liberals and intellectuals owing allegiance to the Trinamool, the Congress and the Left floated a false narrative that Ram Navami has never been celebrated in Bengal and Bengali Hindus do not worship Lord Ram. But scholars emphatically dispute this. Bhagwan Ram has always found pride of place in the pantheon of Hindu Gods in Bengali households. Till a generation ago, many Bengali Hindus had ‘Ram’ and ‘Sita’ as their names or as part of their names. Ram Navami celebrations were, during the days of the British Raj, occasions for kindling nationalistic sentiments and organising wrestling, dagger-play and other competitions with the objective to fostering a martial spirit among Bengalis. Even when Bengal was being ruled by Muslim nawabs, say scholars, Ram Navami and Hanuman Jayanti were occasions to rally Hindus and rekindle a collective Hindu consciousness in order to resist the onslaught of Islam and build up resistance against the nawabs.

The clock, it seems, has turned a full circle in Bengal. And Ram Navami has, once again, become the lighting rod for oppressed Hindus in Bengal to rally and not only assert their religious identity, but also to fight for a dignified existence as equal citizens in the state. The Hanuman Jayanti celebrations across the state next Tuesday, with a massive rally in the heart of Kolkata being its centerpiece, will no doubt serve as a ringing assertion of their religious identity by Hindus of Bengal.