Remembering 1971: When Pakistan Army Made Priest Of Kali Temple Near Dhaka Recite Qalma Before Shooting Him Dead 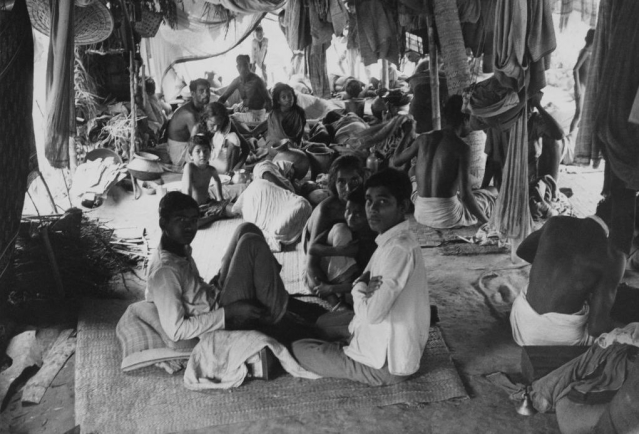 Refugees in a makeshift camp at Bongaon, fleeing fighting on the border between India and Pakistan during the Bangladesh Liberation War, in 1971. (Mark Edwards/Keystone Features/Getty Images)

One of the holiest places for the worshippers of goddess Kali, the Ramna Kali temple was targeted by the Pakistani occupation army in 1971.

The report on the destruction prepared by eminent Bangladeshi historian Prof Muntashir Mamun along with Saharia Kabir, Basudeb Dhar and Dwipen Chatterjee, gives a graphic account of the destruction:

When evening curfew was in effect, Pakistani forces, along with their supporters, encircle the Ramna Kali Temple and Ma Anandamoyee Ashram at 2:00 a.m. in the night of March 27th 1971. The whole Ramna area was well lit by the searchlights of Pakistani forces. Firing of the cannons started in the meantime.

...As a result the deity and the back portion of the Temple wall were completely blown away. Subsequently, the Temple and the Ashram were destroyed. ... People sleeping inside the campus started running around in fear for their lives when the Pakistani army attacked. Everybody started shouting the slogan ‘Pakistan Jindabad’ (Long live Pakistan) in panic, the women broke the bangles made of conch shell and worn on forearms, and wiped out the vermilion dot. Some went into hiding at different corners of the Temple and the Ashram.

Pakistani soldiers searched them out at the point of bayonet and made them to stand in line in front of the Temple. Men were made to stand in one line and the women with children stood in another line. In front of all the people, the Pakistani soldiers forced Paramananda Giri, the temple priest to recite ‘Kalema’ and immediately afterwards killed him by piercing the bayonet into his stomach and shooting. Subsequently many people were forced to recite ‘Kalema’ and then killed in the same way.

Pakistani soldiers would explode in devilish laughter and say that this was the consequence for voting on ‘boat’ marked ballot. The remaining men folks were gunned down in hail of bullets. ...The women were beaten by guns when they started screaming after seeing this horrible carnage. Many of them turned senseless. Pakistanis heaped the dead bodies together and set them on fire with gasoline. Those who were wounded also perished in fire. Witnesses mentioned that some women and children were burned to death in the fire. Pakistani soldiers forced them to shout ‘Jai Bangla’ when they were shot in the mouth and killed.

However, the climax of the destruction came when Bangladesh was liberated.

The destroyed temple for the goddess worshiping pagan Hindus, was neither rebuilt, nor turned into a monument in the memory of the massacred Hindus.

Supposedly secular, Sheikh Mujibur Rahman confiscated the land of the temple from the Hindu board under the Enemy Property Act and handed it over to the Department of Public Works.

The remains which survived the Pakistani carnage were bulldozed.

In 1972, after finishing what the Pakistanis did, the Bangladesh government handed the land over to the Dhaka Club, an elite entertainment body.