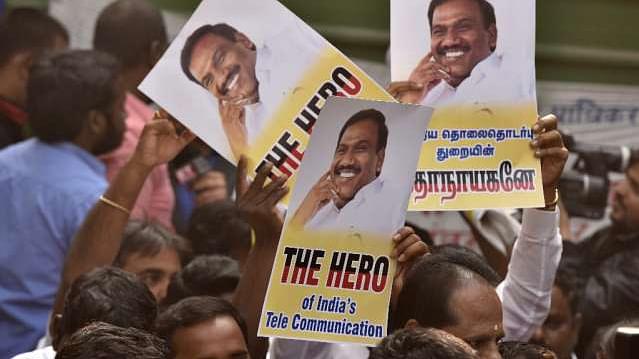 This is the fourth part in the multi-part series analysing Justice O P Saini’s court judgement on the 2G spectrum scam case. (Read part one, part two and part three).

Charge: The Letters of Intent (LOIs) should’ve been distributed on ‘first- come first ­served’ basis. However, to benefit Swan Telecom Private Limited (STPL) and Unitech group of companies, A Raja’s personal secretary R K Chandolia designed a curious method of distribution of LOIs through four counters to the various applicants and also asked the Department of Telecom (DoT) officers to implement it. When officers of DoT hesitated, Secretary (Technology) Siddhartha Behura, a bureaucrat said to be close to Raja, directed them to implement it and even approved the same in the file.

This method subverted the ‘first­-come first ­served’ policy as it resulted in disorderly manner of priority of applicants for signing licence agreements and in reshuffling of the priority of the applicants from date of application to time of compliance. When this method was implemented, different companies had difference of minutes in compliance and even seconds and this ended up benefiting STPL, which got first priority in Delhi where spectrum for one licensee only was available and Unitech Wireless group of companies also got priority in circles where sufficient spectrum was not available to accommodate the last applicant.

Evidence: The defence’s case is that everything was designed and implemented by A K Srivastava, DDG (Access Services (AS)) and the officers under him. Surprisingly again (not really), Raja had no knowledge of the procedure being undertaken in his own ministry. The defence has further said that bureaucrats known to be close to Raja, Chandolia and Siddhartha Behura are innocent.

Judge Saini notes that, “There is absolutely no written record indicating when it was decided as to when and how LOIs were to be distributed.”

The first official record which mentions the method of “four counters” was written on 10 January 2008 by a junior officer R K Gupta who was ADG in AS section. Srivastava was his immediate senior. He writes in his note: “The matter was discussed with DDG (AS), following four counters are proposed to issue the LOIs/response of DOT to various applicant companies/group of companies simultaneously, in first­ come ­first serve order...”

Why did Srivastava come up with “four counters” method? He told the court that he was simply following orders. He explained that he was deliberating in his office about modalities for issuance of LOIs when Raja’s private secretary Chandolia came and conveyed to him that LOIs had to be issued on that day itself (10 January 2008) as desired by Raja and also suggested to go about it by opening four counters to which they disagreed. To this, Chandolia asked Srivastava to come to Behura’s office. Behura also told him the same and when Srivastava objected, “He (Behura) asked me that it had to be done and I should telephonically inform all the UASL applicant companies, who applied up to 25.09.2007, and dual technology applicants to collect the LOIs at 3:30 PM from Sanchar Bhawan on that day itself. He also asked me to issue another press release immediately informing all the applicant companies, who applied up to 25.09.2007, and the dual technology applicants to collect the LOIs/responses from Sanchar Bhawan between 3:30 PM and 4:30 PM.”

Fact Check: This is exactly how the events transpired. The press release was issued in the afternoon. All the applicants were informed via telephone and four counters were set up.

But Chandolia in his deposition said he never ever went to Srivastava’s room. On being asked where he was on 10 January 2008, Chandolia said, “I was in my office in Electronics Niketan on 10.01.2008 throughout the day. I did not visit Sanchar Bhawan on this date. The office of Sh. A. K. Srivastava was at Sanchar Bhawan, but I do not know where he used to sit in Sanchar Bhawan as I never visited his office. I had no meeting with Sh. A. K. Srivastava or Secretary (T) Sh. Sidharath Behura, or both of them together on this date. I had no role or knowledge of issuance of LOIs on 10.01.2008 and setting up of four counters for that purpose.......”

But it turns out Chandolia was blatantly lying. Fortunately, Srivastava wasn’t alone in the room when Chandolia came to meet him. There were other directors of AS section present who were discussing the modalities of issuance of licences.

Here’s What All Of Them Testified Before The Court

Nitin Jain, Director (AS-1) when asked what transpired that day (10.01.2008), he told that, “We were going through the files, as some of the files were approved and some were not. In the mean time, Sh. R. K. Chandolia came to the chamber of DDG (AS) and met him and after a short while he left. After that DDG (AS) Sh. A. K. Srivastava discussed with us that LOIs were to be distributed through four counters, as told by Sh. R. K. Chandolia. This was not the practice and we were not comfortable with this.”

Madan Chaurasia, deposed as follows: “When I was sitting in the room of Sh. A. K. Srivastava, one more person had come to the room, who was not known to me at that time. I had not seen that person earlier. I was working at the computer in the room of Sh. A. K. Srivastava and when that person left I asked my ADG Sh. R. K. Gupta as to who was that person. He told me that he was private secretary to the Minister (RK Chandolia). Normally, he must have spoken to DDG as I was focusing on the computer. I cannot specifically say so.”

AS Verma, Director, told the court in his deposition, “......On 10.01.2008, a meeting was called by Sh. A. K. Srivastava in which officers including myself were present. We were told that all the files pertaining to grant of LOIs had been approved by the MOC&IT and we had to issue the LOIs. The scheme regarding distribution of LOIs was not discussed in my presence.” When asked if any other person also come over in the meeting, Verma replied, “Mr. R. K. Chandolia had come.”

Five people who were present in the room have testified that they saw Chandolia visit Srivastava in his room/chamber. It’s clear that Chandolia lied to the court with a straight face. However, not even once Judge Saini took Chandolia to account on this. Instead, he focused on that none of these knew exactly what Chandolia talked about. But the accounts of five people reveal one thing, i.e. they were discussing how to go about issuance of LOIs but after Chandolia paid visit to Srivastava, they were told to issue LOIs on that day itself and that too through the method of four counters. All circumstantial evidence points to wrongdoing on the part of Chandolia but probably the court was looking at a tape recording of conversation between him and Srivastava.

The most glaring part that has been missed in this whole saga was how first come first served policy was distorted by following the method of opening four counters. When it was asked of Srivastava if the department stuck to first come first served policy when they adopted the scheme of distribution of LOIs/responses by opening four counters, he testified that the scheme “approved by Sh. Sidharath Behura, did not conform to first ­come first ­served issuance....as the distribution was neither on simultaneous basis nor on first­ come first ­served basis. For simultaneous issuance, fourteen counters were required to be opened, whereas for distribution on first­ come first- served basis, only one counter was sufficient to issue the LOIs/responses, sequentially based on date of receipt of applications in DoT.”

Chandolia, in his deposition had said that, “The allegation that I had any role in setting up of four counters for issuance of LOIs is false since as per the record the four counters were set up based on the four directors available in the AS Division.” And this the court went with - the official record, contrary to all circumstantial evidence.

But can anyone take this statement seriously? The truth is the four directors had no incentive to be in such a hurry to resolve LOIs on that day itself. They were just going about processing LOIs at normal speed. Only after Chandolia visited Srivastava, the department fastracked process, moving at lightening speed, issuing press release, calling all applicants and inviting them to the ministry and issuing LOIs through four counters - all in matter of six hours! It is unfortunate that the whole blame was laid at steps of low level bureaucrats.