The Chinese Hand Is Behind Recent Unrest In Northeast India 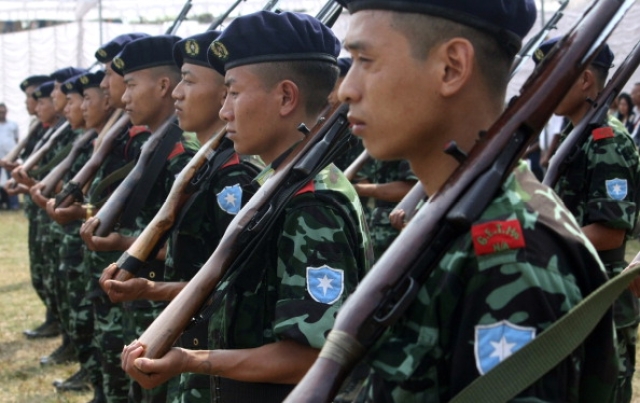 A rebel group in the northeast

North East India has, over the past few months, turned restive over a few identity-based issues. The Citizenship (Amendment) Bill 2016, which has now lapsed, sparked massive protests all over the region. Tribals of some states have launched agitations demanding ‘protection’ from ‘outsiders’. The Nagas are angry over the alleged delay in arriving at a solution to end the long-festering insurgency in the state. Arunachal Pradesh was rocked by unprecedented violence last week.

Agitations, occasionally violent, on myriad issues have suddenly erupted all over the region. But these agitations were anything but spontaneous. They seem to be a part of a larger game-plan hatched by Beijing to destabilise northeast India and foment unrest in the region to divert New Delhi’s attention from the western front. This distraction will also result in pushing at least a substantial part of India’s security forces in the region to quell the unrest.

China has a long history of fuelling unrest in northeast India, starting with the support (in terms of shelter, financial and military aid and arms training) given to the Naga insurgents in the 1960s. Top NSCN leaders were provided shelter and a lot of financial and military aid and then the outfit’s cadres were provided arms training by China. Beijing kept up its support to not only the Naga insurgents through the next few decades, but also helped some other militant outfits of the region.

Of late, the radical faction of the United Liberation Front of Asom (ULFA) headed by Paresh Barua is being provided substantial help by China. Barua had travelled to China last year and received help and assurances of support from Beijing. Barua is now hiding in the jungles of northwestern Myanmar which are controlled by Chinese-backed Myanmarese insurgent outfits like the Kachin Liberation Army (KLA). Through Barua, China is also helping the National Democratic Front of Bodoland (Songbijit faction) as well as some Manipuri outfits. All these rebel groups have their cadres stationed in Myanmar and enjoy Beijing’s patronage.

In the 1980s and till the mid-1990s, insurgent outfits of the northeast were provided shelter in Bangladesh. Bangladesh at that time was ruled by successive military regimes and then the Bangladesh Nationalist Party (BNP) which were all pro-Pakistan and anti-Indian. China, and its proxy Pakistan, had enjoyed a lot of leverage over Bangladesh during those years. However, the northeast militants were ousted from Bangladesh and many of them were handed over to India after the Awami League headed by Sheikh Hasina came to power in the country more than a decade ago.

While many of the northeast rebels have shifted base to Myanmar, the recent crackdown on them by the Myanmarese army has upset China’s plans. However, many of these outfits have migrated deeper into northeastern Myanmar which is controlled by Chinese-backed Myanmarese insurgents. But China is now content with aiding only the militants of the northeast. According to central intelligence agencies, China has started covertly funding some non-political organisations and undercover NGOs in the northeast to foment trouble in the sensitive region.

According to senior officers of the Intelligence Bureau (IB), China is implementing its policy of destabilising the northeast and keeping it on the boil through its assets in Nepal. China has, in recent years, increased its footprint in and influence over Nepal. “Nepal is very easy to access from the North East and the open Indo-Nepal border facilitates easy contacts between subversive elements in the North East and Chinese agents in Nepal. We have uncovered evidence of some political and social activists from Assam and other northeastern states journeying to Nepal to meet Chinese nationals or their agents in Nepal. These very activists have been active in the recent agitations against the Citizenship Bill in the northeast,” said an IB officer.

What aroused the suspicions of intelligence agencies was the sudden eruption of unrest in the North East. “It was almost simultaneous or in quick succession. We also detected a sinister pattern in them. All of them were well organised and seemed to be well-funded. Though they appeared to spontaneous mass protests (like those against the Citizenship Bill), they were actually premeditated and well-planned protests triggered by mainly social media posts and even whisper campaigns. The social media was used intelligently by some activists, who took a lot of precautions to stay under the radar and remain anonymous, to organise these mass protests and agitations,” said a senior IB officer.

What gave the game away was, perhaps, the bold banners held up by people protesting the Citizenship Amendment Bill in Mizoram. The ‘Bye Bye India, Welcome China’ banners sent alarm bells ringing in India’s security-intelligence establishment and a massive investigation was launched. “Our suspicions about a Chinese hand behind recent protests and unrest in the region are turning out to be true as the multiple investigations that we have launched progress. A definitive pattern behind the unrest is emerging and we are also uncovering money trails. A lot of money has been pumped in by China to fuel these unrest,” said the IB officer.

A restive northeast with ethnic strife, militancy and disruptive mass movements is what China wants. “There are many factors that are driving the policy of China. One is that it desperately wants to avenge the loss of face at Doklam and wants to teach India a lesson. The assertive stance taken by India during the Doklam crisis unsettled China and it does not want a repeat of that.

China also wants to punish India for not supporting its Belt & Road Initiative (BRI). Beijing also wants to provide a breather to its ‘all-weather friend’, Pakistan, by diverting New Delhi’s undivided attention on the western front to the northeast. Trouble in the northeast would also force us to tie down our security forces to this region and thus prevent us from concentrating solely on the western frontier,” said a senior officer posted at the army’s eastern command headquarters in Kolkata.

Last weekend’s sudden violence that rocked Arunachal Pradesh was also part of this overall Chinese sinister game-plan in the region. IB officers say that more such unrest will be witnessed in the region over the next couple of months. What is also common to all these protests is that they had transformed into anti-BJP movements.

IB officers suspect that China is doing its bit to damage the Bharatiya Janata Party’s prospects in the run-up to the crucial Lok Sabha polls. China scholar Shantanu Mittal who is associated with a leading New Delhi-based think-tank believes that the resentment of China for the BJP is because of the muscular policy towards Beijing in place of the accommodative and weak stance by the earlier governments. China is not very uncomfortable with this and would prefer to have a weak government in New Delhi.