Emergence Of Non-Heroes In The War of Nationalism 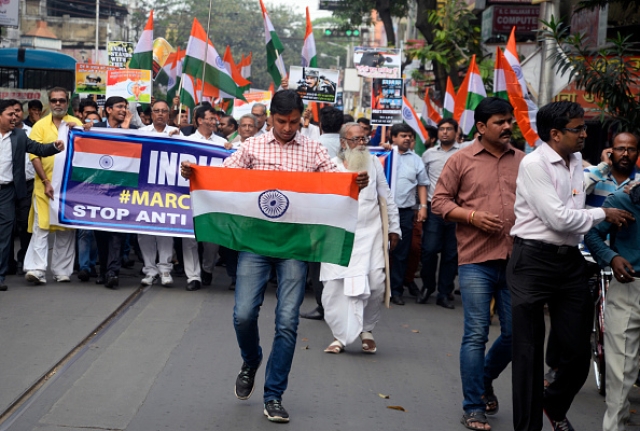 A March against the the ‘Anti-Nationals’ / Getty Images

What is Nationalism? How can you define patriotism, or identify a Nationalist? What are the parameters to judge nationalistic behaviour? Deceptively general and apparently simple questions, aren’t they? But when one tries to conclusively answer these – no definition or no explanation can justly explain them.

The curious irony of current political discourse is that different sections of political and intellectual communities are engrossed in defining and compartmentalising these concepts. These attempts, however, are not purely academic exchanges but have their own political ambitions.

Being true to their convention, the Left has engaged itself in discourse primarily to oppose the government, and this process actively involves branding anybody who doesn’t confirm with their approach as fascist. Of course they present their arguments with a veneer of intellectualism (which sort of makes it more appealing at first), but the core of it is just opposing everything that doesn’t fit in their scheme of thinking.

The other extreme sees any threat to their concept ‘nation’ potentially devastating and believes ‘any’ way to stop such tendency is a ‘just’ way. Trapped between the two colliding approaches is the political discourse that ideally should have been the focus but unfortunately has become the casualty. Though the debate of ‘national v/s anti-national’ is an old one, the recent one has its genesis in the 9 February JNU incident. The attempt of this article is to trace the pattern of these two competing strands and look at the issues that could have occasioned the whole debate.

Kanhaiya Kumar today has become a household name, and you cannot escape any political discussion without his mention. The empty seat of ‘credible opposition to government’ suddenly seems to have got a worthy candidate and all those who want to oppose the government are clamouring to show how close they are to Kanhaiya and his politics.

But ask this simple question – what has he done to become so important suddenly – and it’s difficult to get a substantive answer. Of course, there are always those redundant rhetoric – that he stood against the might of the government, that despite being from a humble background he’s fighting against the fascist government, that he is unfortunate victim of the excess of state and it’s important to join him in saving the democracy. But going beyond the rhetoric, there is hardly anything which he has done to be anointed as hero of our times.

So what explains Kanhaiya’s journey to heroism – it’s the government’s mishandling of the entire JNU row. Before the 9 February incident, hardly anybody cared about Kanhaiya.

Whether he shouted anti-India slogans or not is the matter of sub-judice, but there is no doubt that he was present there and made no attempts to either stop sloganeering or reducing the tempers of confrontation. His new-found conviction to constitution and judiciary, as well as his tactics of diverting the issue from anti-India slogans to criminalising of dissent appears to be well planned and rehearsed (as was his 11 February speech calling for azaadi from poverty).

There is a victim-hood narrative. The prominent ones include the kind of personalized attacks on him (including the ‘chappal-throw’ show) and branding of all those who are ‘blindly’ supporting Kanhaiya - as anti-national. The kind of nationalism that takes continuous recourse to unprovoked violence or intimidation always stands on feeble grounds. And worse, it gives a sense of legitimacy to the opponents. That precisely has happened with Kanhaiya.

The unremitting personal attacks, including threats (the recent one includes a threat not to let Kanhaiya in Pune) has made look Kanhaiya taller than what his own comrades could have ever imagined. Instead, had the government given straight messages that it will allow the fair trial for him and would have acted against the lawyers who abused him, it would have saved them a lot of embarrassment.

What happened however was the opposite – the government was seen entirely incapacitated and the fringe was allowed to define the idea of nationalism that stood to benefit the Kanhaiya camp. Kanhaiya’s histrionics on the other hand obviously have worked but what has happened simultaneously is that everybody is now involved is showing how their version of nationalism is holier than others. This process actively includes the setting parameters and litmus tests which have to be passed in order to be judged as nationalists.

Member of Parliament Assaduddin Owaisi’s refusal to chant Bharat Mata Ki Jai ‘even if a knife is put to his throat’ has triggered an unnecessary controversy. At the outset, let me categorically make it clear that I find no resonance to sanity, indeed no substance at all in Owaisi’s opportunistic and flagrantly divisive politics. It will be politically naïve to assume that Owaisi was making a case for freedom to remain ‘silent’ as guaranteed by the constitution. It’s obvious that he was sporting a political stunt that would appeal to the constituency from where he attracts his maximum support.

But one of the inadvertent outcome of Owaisi’s remarks and subsequent suspension of Waris Pathan from Maharashtra Legislative Assembly has put to test the political maturity of our political class. Evidently – most of them seem to have failed. While I agree that there should not be any problem in chanting Bharat Mata Ki Jai, its equally true that mere chanting of Bharat Mata Ki Jai is by no stretch of imagination a measure of anybody’s patriotism. And therefore it should not be made a litmus test to judge anybody’s commitment to the country.

Forcing anybody to chant the slogan or punitive action against the one refusing to do so is, from where I see, an imperious and rather self-defeating way to express one’s patriotism. It’s imperious because no one can be beaten into loyalty. Neither can anybody be forced to be nationalist. It can only be done through power of attraction and by setting worthy examples. It is self-defeating because attitudes like this requisites conformity to one particular idea/form of nationalism which is in stark contrast with the plurality of the Indian approach. But, Owaisi’s kind of politics will soon make him irrelevant, for India has shown limited tolerance for such theatrics.

While it’s true that it’s difficult to define or identify nationalistic – equally is true that a blatantly anti-national activity can be easily identified. What happened on 9 February is obviously one of those. Rather than discrediting the perpetrators, the intellectual class of a certain kind made all the attempts to cover those who were guilty of incident again by the unwarranted comparisons to emergency, fascism etc. Indeed, a section of media became the mouthpiece for those who wanted an excuse to be apologetic to the whole incident.

The results were twofold – it contributed in making a hero out of an individual whose politics and moral approach a suspect is detrimental to any constructive approaches to build the nation. And second, is that of surrendering the discourse on nationalism to the whims of a class, who under the garb of ‘freedom of expression’ and ‘democracy’ want to install their ‘ideological software’ which doesn’t have any resemblance to Indian realities.

Once is a mistake. Twice the same thing is a blunder. But repetition of the same mistake is no less than a crime and the government and some of its supporters are guilty of committing a crime of remaining indifferent to the fringe in their camp. They are falling in trap of competitive rigidity – the same ideological rigidity which has become hallmark of the left in the recent past. What could have been an opportunity to discuss crucial issues like sedition, freedom of expression, discourse on nationalism was lost in this mindless competition on ‘versions of nationalism’ and it doesn’t seem to halt.

One thing, however, is true – that India by the virtue of what it is and what she stands for, breeds its own version of nationalist discourse which may be different from the one perpetrated by the Left in the country. and is distinct from the other cited examples. To conflate it with other ideologies is to do injustice to our own understandings. What is crucial therefore is to ignore the dogmatically rigid extremities and build a discourse that is based on realities rather than on political opportunism.