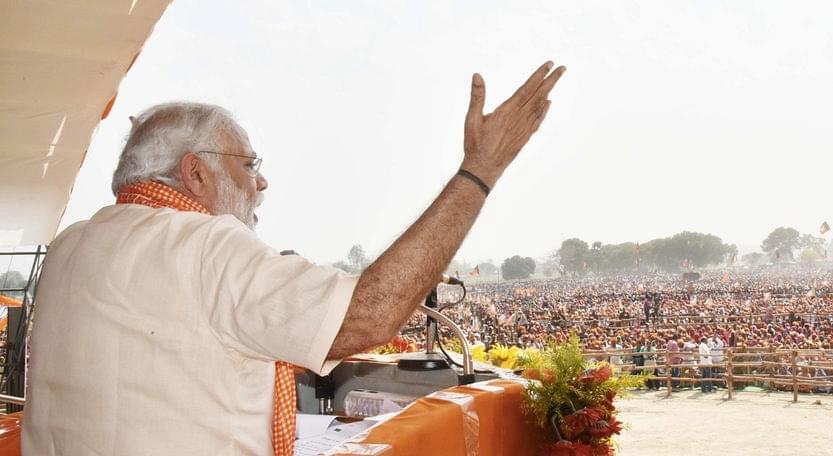 Narendra Modi in UP

Whoever is chosen as BJP’s CM in Uttar Pradesh later today, there is one truth waiting to reveal itself in all its magnitude to him. The next BJP government in UP will have to deliver its report card not in five, but in two years.

The performance of the state government is bound to be an issue in UP in the Lok Sabha elections of 2019. And if Narendra Modi wishes to return to power, the BJP has to garner more than half of the 80 seats in the state, and that at the very least.

Given such a context, the state government’s performance is bound to come up for intense scrutiny not in 2022, but in 2019 itself. So, whatever policies the new government formulates, whatever projects it sanctions, the practical deadline for their delivery is 2019, just two years from now.

Add to this, the very real possibility of an SP-BSP-Congress-RLD mahagathbandhan in 2019. Going by yesterday’s numbers, the combined vote share of these parties was exactly 52 per cent. Although that is not how vote shares add up in political alliances, the point here is that such a mahagathbandhan would be the toughest political battle yet for Narendra Modi and Amit Shah.

Each of these four parties has a reason to enter into an alliance with the other three, whatever they may have said about each other in the past.

Ajit Singh’s Rashtriya Lok Dal lost its Jat vote base to BJP in 2014 and has not been able to wrestle it back even in 2017. For all the media reports of Jats deserting BJP and the party doing poorly in phase 1 in western UP, the BJP got 61 out of 73 seats in that round.

Mayawati has two reasons to enter into a mahagathbandhan. One, although she is still able to hold on to a voteshare in the early twenties, she knows the BSP needs to add to it if it has to salvage its relevance in state and national politics. Starting with the Lok Sabha elections of 2009, this was the fourth straight election (assembly included) where the BSP performed way below its expectations. Secondly, with Narendra Modi at the helm, BJP in power in Lucknow, and she herself suffering defeat after defeat, there is a real danger that even her core Dalit vote bank would desert her. A mahagathbandhan is the best chance Mayawati has of solving all or most of these problems.

The Samamjwadi Party on its part should have realised that a mere Muslim-Yadav alliance is not enough to defeat the BJP of Modi. They need other communities to join in. And if that can’t be done by the SP alone, it needs allies.

But then, they had an ally, didn’t they? They did, but it was Congress. For any incremental vote to come in, they need the BSP as the main partner.

The Congress, on its part, can sit out of the alliance and it would make no difference in the larger scheme of things. But the party has presence in specific seats of UP and in a Lok Sabha contest, those votes could make all the difference. Secondly, it cannot afford to be seen as a non-participant in an anti-Modi front.

So, looking ahead, the 2019 election in UP looks like a contest between the BJP and an alliance comprising of potential anti-incumbency-SP-BSP-Congress-RLD.

The message is clear. Whoever is the chief minister, there is no time to celebrate.