Wait, What? Mamata Banerjee Wanted To Recite Saraswati Vandana As A Response To Amit Shah But Ended Up Making A Mess Of It 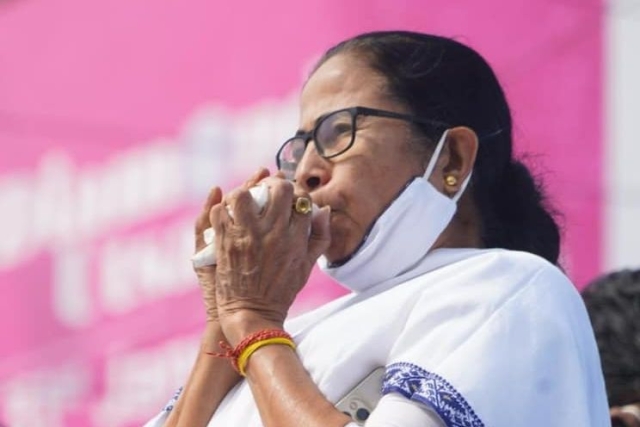 Trinamool supremo Mamata Banerjee has been battling charges of abject appeasement of Muslims for a long time now.

These charges were repeated by Union Home Minister Amit Shah at a huge rally at Namkhana in South 24 Parganas on Thursday.

Shah criticised Banerjee for disallowing Saraswati Puja in some educational institutions (read this) a few years ago.

Reacting to that charge at another public rally at Pailan in the same district later on in the day, Mamata Banerjee challenged the Union Home Minister to recite the ‘Saraswati Mantra’.

Banerjee then asked Shah and her critics to keep their ears open and hear her reciting the mantra (hear this). However, she committed major errors and only displayed her utter lack of proficiency.

Parts of the mantra she recited made no sense at all. The Saraswati Devi mantra is recited to invoke the Goddess and while offering pushpanjali to Her.

Mamata Banerjee, however, gets it completely wrong after the first two lines. She recites:

Pandits say that some of the lines of the so-called mantra that Banerjee recited make no sense at all. Kucho Shito Bhuito, for instance, is nonsensical and has no meaning in Sanskrit or any other Indian language.

The Trinamool chief also mixed up some shlokas and sentences. For instance, instead of Bina Ranjita, Pustaka Haste, she says Bina Pustaka, Ranjita Haste.

In her erroneous recital of Saraswati vandana, Banerjee takes the name of Goddess Bishalakshmi, who is actually a form of Goddess Parvati.

Goddess Saraswati is the daughter of Parvati and the latter’s name cannot find place in Saraswati vandana.

Banerjee also recited: Aum Bhadrakali Namoh Nitang, which translates into obeisance to Goddess Bhadrakali. Bhadrakali is a fierce form of Devi Mahamaya or Durga. And Goddess Durga is, once again, the mother of Devi Saraswati.

“It is clear from her recital of the Saraswati vandana that she is not very conversant with it. She uttered a line which makes no sense and is alien to not only Sanskrit, but all other Indian languages,” said Sanskrit scholar Pandit Ramkrishna Chatterjee.

Friday was not the first time, however, that Mamata Banerjee tripped while trying to show off her knowledge of Hindu shastras.

A couple of years ago, while reacting to the BJP’s charge of appeasing Muslims, she asserted she was more Hindu than others and started reeling off the names of many Hindu Gods and Goddesses.

Among the many names she recited was ‘Visnu Mata’. That became a huge joke, but it seems to have been lost on her. She kept repeating this mistake and as recently as this month, she again recited the names of Gods and Goddesses and mentioned ‘Vishnu Mata’.

“The manner in which she recited the Saraswati vandana is not a joke. It is an insult to all Hindus. Reciting a vandana or a mantra erroneously or making it up and interesting nonsensical sentences is a grave sin,” said Gurupada Bhattacharya, a renowned Sanskrit scholar.

“Her horrific recital of the Saraswati vandana is proof of how little she knows about the religion she professes to practice. And if she does not know a mantra, she should not utter it. Making up a mantra with nonsensical words is terrible and even blasphemous,” said state BJP chief Dilip Ghosh.

A senior BJP leader who declined to be named said that it is not surprising that Banerjee could not recite the Saraswati vandana at all. “She could, however, recite the (Islamic) kalma very fluently and with perfect elan and ease (a few years ago at a public meeting,” said the leader.

Banerjee’s unabashed recital of the first of the six kalmas of Islam drew a lot of criticism at that time.

The first kalma reads: la ilaah illalah, Muhammadoor rasool Allah. Translated to English, it means: There is no God but Allah, and Muhammad is His messenger.

“This kalma is recited by those who are converting to Islam. It is the verse which is administered by a Muslim cleric during a conversion ceremony. And the one who recites it is acknowledging that there is no God except Allah. That in itself amounts to acceptance of Islam,” explained the BJP leader.

Videos of Mamata’s recital of the Saraswati vandana have been doing the rounds of social media since last evening and have invited a lot of mirth and ridicule.